This week’s musical:
So Long Letty

Plot:
Letty Robbins (Greenwood) works in a hotel beauty salon and makes a bad first impression on Claude Davis (Gillingwater), without knowing it’s her husband Tommy’s (Roach) wealthy uncle. When Uncle Claude visits Tommy, he makes the mistake of thinking his neighbor Grace (Miller) is Tommy’s wife. In turn, Tommy has become irritated of lively Letty and Grace’s husband Harry (Withers) has grown tired of Grace, who is the perfect housewife. The two men switch wives for a week to see if the man is better off.

Trivia:
• Charlotte Greenwood reprised her role on film that she originated in the Broadway play. The play ran at the Shubert Theater from Oct. 23, 1916, to Jan. 13, 1917. The character of Letty in “So Long Letty” spawned multiple shows, such as “Linger Longer, Letty” and “Let ‘Er Go, Letty,” according to The First Hollywood Musicals by Edwin M. Bradley.
• Another film version was released in 1920 starring Grace Darmond, Colleen Moore, Walter Hiers and T. Roy Barnes.
• Charlotte Greenwood’s first talking film. 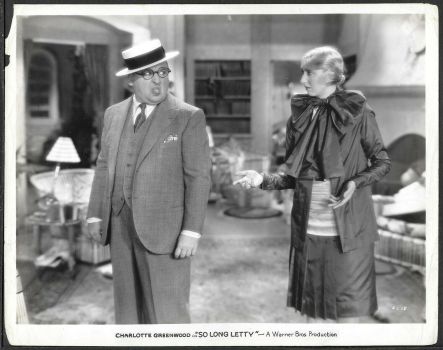 Bert Roach and Charlotte Greenwood in “So Long Letty”

My review:
After the dawn of sound in films, filmmakers and actors had to work to relearn many portions of their craft. Also with talkies, a new type of film was developed — the musical.

And early musicals struggled to develop. Directors and cinematographers had to learn how to adequately move the camera under dance numbers. Writers had to determine how to fit songs into the storyline.

However, in the case of “So Long Letty” (1929), filmmakers knew what they were doing.

Where many early talkies and musicals feel stiff and actors don’t seem to move about, “So Long Letty” has set changes and songs that flow with the musical.

This film is just as much of a comedy as it is a musical. The husbands switching places and finding out that life isn’t so grand is hilarious.

Bert Roach plays Charlotte Greenwood’s husband, and he is frustrated that she isn’t a good housekeeper and prefers to live a fast life. Grant Withers plays the husband of Grace Moore, who is the perfect cook and housekeeper. But Roach’s character quickly gets annoyed with Moore’s perfection and Withers’ character is exhausted by all of Greenwood’s parties.

“So Long Letty” is only an hour-long and lots of fun. Charlotte Greenwood was in several films in the early 1930s but found her fame more in 20th Century Fox films of the 1940s.