Plot:
Vicky Lane (Grable) and Dan Christy (Payne) are a Broadway performing duo and also an item. But Vicky gets tired of Dan’s philandering and takes an offer performing at a resort in Lake Louise, located in the Canadian Rockies with her old dance partner Victor Prince (Romero). Dan follows Vicky to the Rockies to try to win her back, and because his career is sunk without her. Along the way he picks up a valet (Horton) and secretary (Miranda), who Vicky thinks he’s in love with.

END_OF_DOCUMENT_TOKEN_TO_BE_REPLACED

This week’s musical:
So Long Letty

Plot:
Letty Robbins (Greenwood) works in a hotel beauty salon and makes a bad first impression on Claude Davis (Gillingwater), without knowing it’s her husband Tommy’s (Roach) wealthy uncle. When Uncle Claude visits Tommy, he makes the mistake of thinking his neighbor Grace (Miller) is Tommy’s wife. In turn, Tommy has become irritated of lively Letty and Grace’s husband Harry (Withers) has grown tired of Grace, who is the perfect housewife. The two men switch wives for a week to see if the man is better off.

END_OF_DOCUMENT_TOKEN_TO_BE_REPLACED 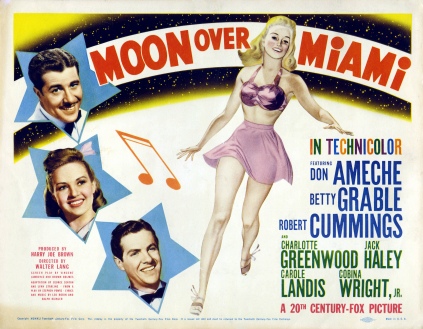 Plot:
Kay and Barbara Latimer (Grable and Landis) work with their Aunt Susan (Greenwood) at a burger joint in Texas. They think they are going to come into a windfall of money, but only ends up being $4,000. Kay comes up with a scheme where they will go to Miami on the money and get rich husbands. Kay poses as an heiress with her sister acting as her secretary and her aunt poses as her maid. Kay meets two millionaires who are smitten with her- Jeff (Cummings) and Phil (Ameche). Which will she pick and are they everything that they seem they are?

Trivia:
-Joan Davis was cast in the Carole Landis role in March 1941.
-John Payne and Dana Andrews were considered for the male leads.
-Originally supposed to star Virginia Gilmore and Gene Tierney or Arline Judge were conceived to appear in the roles of Barbara and Susan.
-Remake of “Three Blind Mice” (1938)-starring Loretta Young and Joel McCrea-and “The Greeks Had a Word for Them” (1932) starring Joan Blondell, Madge Evans and Ina Claire.
-Remade with “Three Little Girls in Blue” (1946) starring June Haver (who once was called the Pocket Betty Grable), Vivian Blaine and Vera-Ellen.

Highlights:
-The Condos Brothers (Frank and Harry) dance with Grable and then perform in an elaborate South American dance number. Grables dance in “You Started Something” with them is one of my favorite dances in the film.
-Charlotte Greenwood’s flexible, high leg swinging dance moves 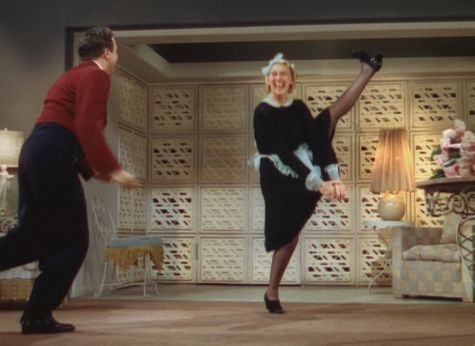 -In “The Kindergarten Congo,” Grable dances with Hermes Pan, who choreographed many of Fred Astaire’s musical numbers in musical films.
-Betty Grable’s wardrobe. She buys a new wardrobe to catch a millionaire husband and every single outfit is adorable. Here are some picture of my favorites:

My favorite dress in Moon Over Miami. Grable is dancing with the Condos Brothers in “You Started Something” (Comet Over Hollywood/Screen cap by Jessica P.)

Notable Songs:
-“You Started Something” sung by Robert Cummings and Betty Grable
-“Kindergarten Conga” sung by Betty Grable, which is my favorite number in the film
-“Loveliness and Love” sung by Don Ameche
-“Is That Good?” sung by Charlotte Greenwood and Jack Haley

My Review:
This is my favorite Betty Grable movie and a movie I pop in when I have the blues. It’s colorful, the fashion is great and the songs are catchy and lighthearted. Grable looks her most beautiful and the supporting cast is excellent. Landis isn’t featured as much as Grable but does a great job in all of her scenes. Charlotte Greenwood is always a delight, especially with her goofy dancing. Both leading men are also entertaining and likeable. There are few things I can find wrong with “Moon Over Miami,” other than the fact that it has to end.
It isn’t a heavy film with some great intelligent message. But if you are looking for a pleasant way to spend an hour and a half, I suggest you spend it with “Moon Over Miami”