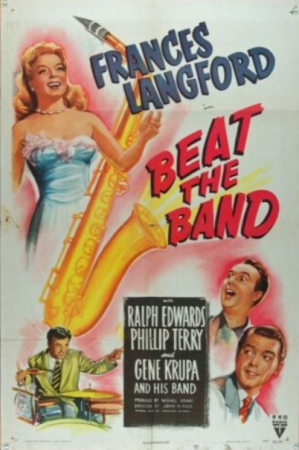 Plot:
Bandleader Damon Dillingham (Tery) returns home from the military, thinking his manager (Edwards) and father (Tombes) had been paying his band. Instead, they have been spending the salary money on a losing racehorse. To make money to get the band together, they have Damon pose as an opera instructor and singer Ann Rogers (Langford) is his top dollar student – though Ann prefers swing music.

Trivia:
• Based on a George Abbott play of the same name which was on stage from Oct. 14, 1942, to Dec. 12, 1942. The play included actress Joan Caulfield in the cast.
Trumpet player Red Rodney was supposed to have a role in the film, but only ended up performing in Gene Krupa’s band, according to the Library of Congress. 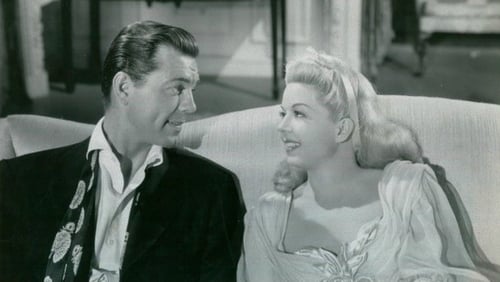 Phillip Terry and Frances Langford in “Beat the Band.”

My review:
Frances Langford was one of the top singers of the 1940s; popular with soldiers during World War II and a frequent USO show performer overseas.

From 1935 to 1955, Langford performed in more than 30 films; sometimes as herself and other times as an actress. Particularly in the 1940s, she starred in short, B-musicals.

The quality of these films was never as rich as Langford’s singing voice, but always fun.

“Beat the Band” (1947) is a post-war B musical and comedy. When a bandleader, played by Phillip Terry, returns from World War II, he finds that his band was not kept together as promised. To earn money to reunite everyone, he poses as an opera teacher for Frances Langford, who is more interested in swing music than opera music.

Phillip Terry plays Langford’s leading man and is just okay. At the start, we see his character singing on film, and I’m not sure if Terry was really singing or not.

“Beat the Band” is a quick 67 minutes. It isn’t an Academy Award winner but it is good fun.