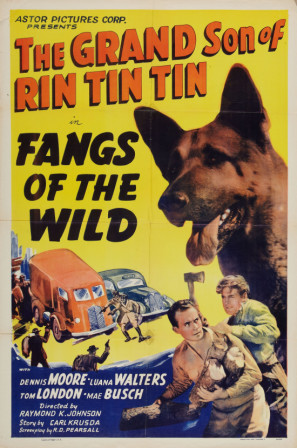 Plot:
Foxes are stolen from a fox farm and police cannot crack the case. Don Brady (Moore) is brought in to investigate undercover. Don pretends to be on summer vacation in Summer Valley with his nephew Buddy (Spellman) and his German Shepherd dog Rinty (Rin Tin Tin Jr.). There is a case of mistaken identity when another German Shepherd gets involved in the case.

Rinty and the bunnies

My review: Searching for the “1939 feature”:
When we talk about Hollywood’s greatest year, I don’t think “Fangs of the Wild” (1939) is going to enter the discussion.

This brief, 50-minute crime animal film begins with a police officer going undercover to see who is stealing foxes. During the investigation, the police officer tries to appear that he’s on vacation with his nephew, who brings his dog Rinty. Rinty then gets accused of stealing and killing the foxes, but viewers know Rinty loves animals and would never hurt them, because he frequently visits his bunny friends in the forest.

But if you’re a dog lover, you may enjoy this film. And Rinty sitting with the bunnies make this movie worthwhile.

Rinty the dog, billed as Rin Tin Tin Jr., is either the son or grandson of the great Rin Tin Tin, the acting German Shepherd who died in 1932. Rinty followed in his father’s paw prints and went on to star in films and serials until 1939. Rinty died in 1941 of pneumonia.

It’s only confusing who Rinty is in this film because the film poster calls him “The Grandson of Rin Tin Tin.” Though I suspect this is the son.

The prints available of this film are pretty abysmal. The way it’s shot and the music even made me think of an early sound film, but that can’t be helped with any low budget film.

The lead actors are fairly nondescript and not much to speak of. Of those starring in the film, I was only familiar with two actors – child actor Martin Spellman and former silent star Mae Busch, who starred in films like The Unholy Three with Lon Chaney. Busch has a bit part of a woman buying a fur coat to gather information for the police.

The true star, Rin Tin Tin Jr, doesn’t even show up until 20 minutes into the 50 minute film.

This isn’t the best or most engaging film, but what can I say, the dogs won me over because they are so cute. And the bunnies, I can’t forget those.