Plot:
Fictional biographical film of songwriter Ernest R. Ball (Haymes). The film chronicles when Ernest struggles as a songwriter and works to get to New York to follow singer and dancer Mary ‘Irish’ O’Neill (Haver).

Trivia:
• The film focuses on Ohio-born composer Ernest Ball, who was born in 1878 and died in 1927 at age 48.
• Lynn Bari was originally announced as the female lead and then replaced by Vivian Blaine, according to a Jan. 1, 1944 news brief “Monty Woolley is to Get Nice Role in Picture.” June Haver replaced Blaine in Feb. 1944.
• Produced by Damon Runyon
• Opera singers Leonard Warren and Blanche Thebom perform as a specialty act
• The story was adapted for the Lux Radio Theater and aired on March 15, 1948.
• Originally titled “When Irish Eyes Are Smiling”

Awards and nominations:
• Alfred Newman was nominated for an Academy Award for Best Music, Scoring of a Musical Picture. Carmen Dragon and Morris Stoloff won for “Cover Girl.”

My review:
Composer Ernest Ball wrote some multiple songs reminiscent of Ireland in the early 1900s, such as “When Irish Eyes Were Smiling” and “Mother Machree.” Though Ball was not Irish, he collaborated with Irish singer Chauncey Olcott on the lyrics.

June Haver plays Mary ‘Irish’ O’Neill, Ball’s fictional love interest. The film starts showing Mary’s fierce Irish temper where she gives men black eyes who get too fresh. With this build up, you would think we would see more of Haver throughout the film, but there is a 30-minute block where Haver disappears and Haymes’s character rises to fame.

This film was still fairly early in the careers of Dick Haymes and June Haver. This was only Dick Haymes’s second film role where he isn’t just a singing appearance.

While Haymes and Haver are the stars, the supporting cast really are the highlights. Maxie Rosenbloom has a bit part as a prize fighter moved by Ball’s music and helps him get to New York. And Veda Ann Borg is seen at the start of the film as a burlesque dancing star who gets June Haver fired. Truthfully, those two are the best characters of the film and I wish they had more screentime.

Monty Woolley plays his usual sarcastic and unfriendly character. Woolley’s character frequently is in bets with Anthony Quinn, who is extremely handsome in this Technicolor film. The last half of the film is based on a bet between Woolley and Quinn which involves making June Haver a Broadway star, which is all a bit silly.

Plot-wise, “Irish Eyes Are Smiling” isn’t very good, since most of it is gags and bets between the characters.

But it has beautiful music and is also visually gorgeous. Ernest Ball’s songs gorgeous and the dance numbers from Hermes Pan are wonderful. 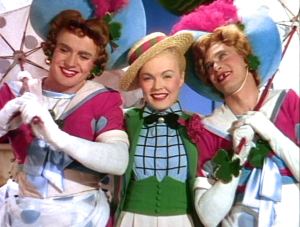 The “Bessie in a Bustle” number

Pan conceived the dance “Bessie in a Bustle,” which has two parts: Kenny Williams sings the song first with a male chorus and June Haver comes out as “Bessie.” Then in the second part of the song, the genders are reversed and Haver dresses in a suit as the chorus of men are dressed as ladies in bustles.

The end of the film also includes a lovely montage of Ball’s songs. And finally, we hear “When Irish Eyes are Smiling” in entirety for the first time in the film. We heard the title song in the score and once solo by Dick Haymes with no orchestra. But the song is finally performed in the finale.

Overall, this film isn’t the best but it’s still fairly entertaining and just gorgeous to look at. Since 20th Century Fox films can be hard to locate, if you can come across it – watch it.