Plot:
Danny Collins (Vallee) and Mike Armstrong (Lane) meet at random in a nightclub. Danny is a Harvard grad and Mike the agent of singer Frances Lewis (Lane), and Danny critiques Frances’s voice as she performs in the nightclub. Danny and Mike form a successful New York talent agency in an effort to make Frances a star, but she gets married and briefly leaves show business. Danny and Mike start rehearsing a groundbreaking television hour with Joan Merrill and jazz bands performing. But when Frances gets divorced, Mike wants the whole show reworked to star her, causing a rift between Danny and Mike.

Trivia:
• Joan Merrill’s first film. She was in a total of three films.
• Songs by Saul Chaplin and Sammy Cahn.
• Working titles for the film “Time Out for Music” and “Show Business.”
• The film was originally announced with Dick Powell, Benny Goodman and Xavier Cugat in the cast. William Gargan was originally set to play Mike Armstrong.

Highlights:
• “The Boogie Woogie Man” number with the use of shadows and lit up instruments
• Allen Jenkins dancing 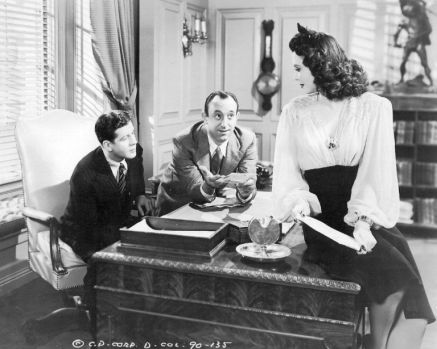 Rudy Vallee, Allen Jenkins and Ann Miller in “Time Out for Rhythm.”

My review:
On the surface “Time Out for Rhythm” is a run-of-the-mill Columbia musical, but it has one really interesting feature – it discusses television earlier than many films I’ve seen.

The first time we see the rifts occur is when Danny won’t restructure a television broadcast to only feature Frances; dumping the other performers. The development of television dates back to the 1920s, and the film recognizes that a broadcast variety show of this nature would be groundbreaking.

Outside of this slight historical mention, “Time Out for Rhythm” is chockful of toe-tapping songs.

One of the best numbers is a big band number, “Boogie Woogie Man” which is shot with shadows and glowing instruments to give a spooky illusion.

Ann Miller also sings and tap dances to one of the best songs in the film, “A-Twiddlin’ My Thumbs.”

“Time Out for Rhythm” is also a vehicle for singer, Joan Merrill. This was Merrill’s first film, playing herself, but she was only in three films.

I do need to point out Joan Merrill’s number, “As If You Didn’t Know.” It is a lovely song until her speaking interlude, which gets really detailed “And our first quarrel … how was I to know she was your sister.” “The horse’s name … what was it? Penelope … what a silly name for a horse.” It made me laugh.

Another really fun feature is that Allen Jenkins sings and dances a bit with Ann Miller, which they reprise in their next musical “Go West, Young Lady.”

Though I enjoyed the film for the songs and dancing, many of the film’s viewers probably will seek “Time Out for Rhythm” for the roles of The Three Stooges, who even perform a Carmen Miranda-like musical number. Truthfully, the Stooges weren’t my favorite feature in the film, but I understand that they make the film notable. Also, for Petticoat Junction lovers, Elvia Allman (who played Selma Plout on the show) makes an appearance in the film and even is in the closing number with the Stooges!

Overall, while maybe not very memorable, “Time Out for Rhythm” has so many fun songs, you may even almost forget the plot! 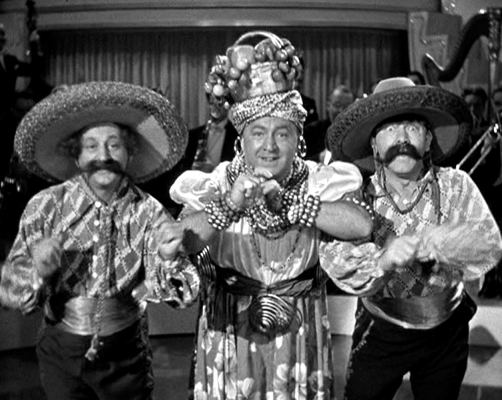 The Three Stooges in “Time Out for Rhythm.”