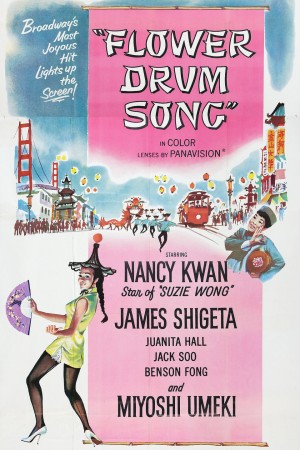 Plot:
Mei Li (Umeki) and her father (Tong) arrive in San Francisco from Hong Konh. Through traditional customs, Mei Li was selected as a “picture bride” for Sammy Fong (Soo). When they arrive, they find that Sammy wasn’t expecting them and owns a night club and not interested in the bride selected for him, as he is in love with clubs lead performer, Linda Low (Kwan). He knows a family looking for a bride for their son Wang Ta (Shigeta). The story looks at tradition versus living a modern, American life.

Trivia:
• First major Hollywood film to star a predominately Asian cast.
• The film version of the 1958 Rogers and Hammerstein Broadway show. The Broadway show was based on the 1957 book by C. Y. Lee.
• Anna May Wong was set to be cast as the aunt in “Flower Drum Song.” However, Wong became ill and Ross Hunter had to replace her with Juanita Hall. Wong died shortly after, according to Anna May Wong: From Laundryman’s Daughter to Hollywood Legend by Graham Russell Hodges.
• Miyoshi Umeki, Juanita Hall and Jack Soo reprised their roles from the original Broadway cast.
• Jack Soo’s first film.
• Betty Jane Baker dubbed Nancy Kwan’s singing voice. Jon Dodson dubbed Kam Tong, and Marilyn Horne dubbed Reiko Sato
• Dong Kingman painted the art in the opening credits of the film. 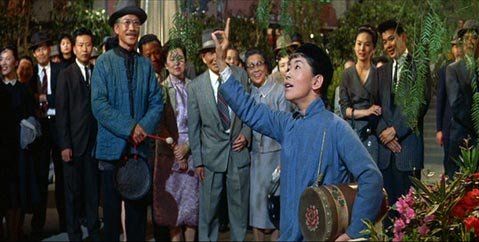 Nancy Kwan performs “I Enjoy Being a Girl.”

Reiko Sato and James Shigeta in the dream ballet for “Love, Look Away”

My review:
With catchy songs, a stunning cast, breathtaking dance numbers and gorgeous costumes, “Flower Drum Song” (1961) is a visually beautiful musical that is also so much fun.

But more than that, this musical is also groundbreaking in Hollywood history.

It was the first time that a major Hollywood feature film featured a mostly Asian cast, including the leading characters. And unfortunately, as of 2020, it is still one of few films that features a predominately Asian cast. This would include with 1993’s “The Joy Luck Club,” and more recently “Crazy Rich Asians” (2018).

The film was also one of the last time some of its leading characters were cast in starring roles.

“It was the only place on television where you could see Asians acting like Americans so growing up, the musical represented one of the few positive portrayals of people that looked like me,” said playwright David Henry Hwang, who was responsible for the 2002 Broadway revival. “It was kind of a guilty pleasure and one of the only big Hollywood films where you could see a lot of really good Asian actors onscreen, singing and dancing and cracking jokes.”

“Flower Drum Song” takes a comedic look at the struggle between the old country vs. the new country. A woman and her father travel from Hong Kong to San Francisco, California, prepared to carry out the old tradition of having an arranged marriage. They soon find that this custom isn’t readily accepted in America. Even as they arrive in California and are surrounded by Asians, no one speaks Chinese. The older generation wants to continue their old traditions, while the younger generation wears western clothing, listens to rock n’ roll, and wants to date (and marry) who they choose rather than their parents.

The film was based on a successful Rodger and Hammerstein Broadway musical, which was adapted from the novel “Flower Drum Song” by C.Y. Lee.

While the film is largely a comedy (with many legitimately funny scenes), it is an interesting look at the older versus younger generations, which most cultures still experience today.

Produced by Ross Hunter, the film has the lavish Technicolor look that all of his films seem to have. It’s simply gorgeous. The costumes are beautifully designed by Irene Sharaff.

There are also some interesting (pre-computer) special effects, like Nancy Kwan dancing with her image in the mirror, all in a different costume. Or when TV characters jump off the black-and-white television screen and run through the house during the “Sunday” number.

The film also has an incredible cast.

James Shigeta is so dreamy as the leading man, Wang Ta. He has to decide if he should date and marry the sexy night club singer, Linda Low (played by Nancy Kwan), or should he follow tradition and his family’s wishes and marry Mei Li (played by Miyoshi Umeki). Shigeta was one of the first (since Sessue Hayakawa) Asian men to play a leading romantic character. In 1961, it was rare for an Asian man to be a lead romantic role, and in 2020 it isn’t that different. Sadly, “Flower Drum Song” was one of Shigeta’s last leading roles, though he continued acting in supporting years for years following.

In a 2014 WNYC interview, Shigeta remembered an MGM executive telling him, “If you were white, you’d be a hell of a big star.”

Similarly for Nancy Kwan, she was hot off the success of her first film “The World of Suzie Wong” (1960). “Flower Drum Song” was her second film, and her career looked bright. However, the quality roles didn’t come after this film, though she acted steadily and continues to perform in Hollywood. Kwan is wonderful in “Flower Drum Song” as Linda Low. She is gorgeous and it’s fabulous to see her dancing skills in the “Grant Avenue” number, since Kwan was a trained ballet dancer.

Miyoshi Umeki and Jack Soo both reprised their role from Broadway, as did African American actress Juanita Hall.

Umeki’s Mei Lee is sweet and funny in this film, and she has such a wonderful voice. Jack Soo is hilarious, and I love his duet with Umeki.

The dance numbers in this film, choreographed by Hermes Pan, are outstanding. Knowing him mainly from his work from Fred Astaire, it was interesting to see him break out of the hoofer/ballroom dancing numbers. We have everything from a cha cha-like number in “Chop Suey” to an elegant dream ballet with “Love Look Away.” The dance numbers are really thrilling – probably some of the best that I’ve seen in a Rodger and Hammerstein movie adaptation.

The dance number for “Chop Suey”

My only complaint is – what on earth happens to the character Helen, played by Reiko Sato? She performs “Love Look Away” and Wang Ta leaves her apartment, and then?? In the novel, Helen kills herself but that plot point was not included in the Broadway play. Sata is fabulous as Helen and the gorgeous dream ballet, but it was a rather thankless role.

But what happened to Helen?

I know it’s bad to say, but I really almost wanted Wang Ta to be with Helen. I felt sorry for her.

Until last week, I hadn’t seen “Flower Drum Song” in years, and didn’t remember much about it. But I had so much fun watching this musical. It’s different than the more stalwart Rodgers and Hammerstein musicals like “Oklahoma,” “South Pacific” and “Sound of Music” – which are all good, but more serious.

Give this film a chance. I don’t think you will regret it.