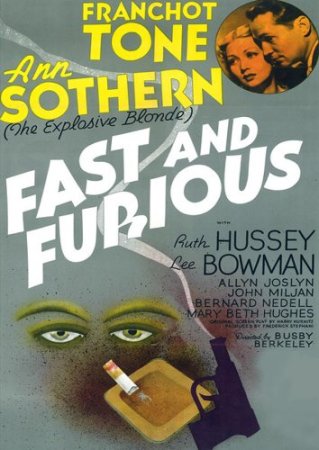 Plot:
Garda Sloane (Sothern) convinces her husband Joel (Tone) to take a vacation. However, rather than a relaxing trip, they find themselves in Seaside City in the same hotel as a beauty contest with Joel signed up to be a judge to the contest, which he was convinced to invest in by Mike Stevens (Bowman). Garda isn’t pleased with Joel’s task, and Joel realizes something is amiss with the contest, especially when the pageant’s promoter Eric Bartell (Miljan) is murdered.

Other trivia:
• “Fast and Furious” is part of a trio of films that follows a married couple, Joel and Garda Sloan, solving mysteries. Each film has different leads playing the Sloans: “Fast Company” (1938) stars Melvyn Douglas and Florence Rice, and “Fast and Loose” (1939) stars Robert Montgomery and Rosalind Russell.
• The “Fast” trio was created in response to the popularity of the sophisticated detective films, “The Thin Man” series, and from complaints that “Thin Man” films weren’t being released fast enough, according to Forever Mame: The Life of Rosalind Russell by Bernard F. Dick.
• “Fast and Furious” is the last of the series to be released.
• Mary Beth Hughes replaced Virginia Grey in the film.

My review: Searching for the “1939 feature”:
For starters, if you are looking for a 2000s movie about racing, you have reached the wrong blog. This isn’t a racing film.

But if you are looking for a mystery filled with bathing beauties and murders, you’re in the right spot.

Ann Sothern and Franchot Tone in “Fast and Furious.”

After the “Thin Man” detective films became such a success, several films tried to recreate that success with married amateur detective couples. One of these was the “Fast” series, about married rare book-dealers who also solve a mystery.

“Fast and Furious” was the last of this film set.

For this mystery, we have equal amounts of comedy and mystery. The comedy largely comes from Garda being jealous of Joel judging the beauty contest, as well as a mix up with some trained lions in their hotel suite. The mystery aspect gets a bit confusing because there are so many suspects, but somehow you can pretty easily figure out whodunit.

The film itself is an entertaining (and brief) B-level film. It’s well-cast with several notable character actors, funny and we even get to see a fashion show.

While the film may seem unimportant, this film was important for the careers of the stars and the director.

For it’s two leading actors, they both were transitioning in their careers. Ann Sothern had just signed with MGM to play the lead role in the Maisie film. Sothern ended up finding fame at MGM, after playing years of thankless roles.

In contrast, this was Franchot Tone’s last film under contract with MGM, a studio he had called home since 1932.

This is also a rare non-musical for director Busby Berkeley, and also signed with MGM in 1939. He had just left Warner Bros. after directing the non-musical “They Made Me a Criminal” and launched into a non-musical mystery comedy with “Fast and Furious.” (Though this film has been called a musical, it’s not).

While the “Fast” series doesn’t measure up to The Thin Man, it’s still fun – and career-changing for some of those involved in the film.