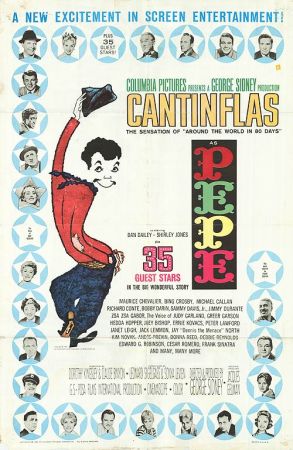 Plot:
When his horse Don Juan (King Cotton) is sold, Pepe (Cantinflas) goes to Hollywood to get him back from has-been movie star and director Ted Holt (Daily). Along the way, Pepe meets a bevy of stars and Suzie Murphy (Jones) who wants to become a star but is jaded by the entertainment business.

Trivia:
• Cantinflas’s last Hollywood film.
• Last film appearance of Billie Burke and Charles Coburn, who have cameos in the film.
• The film features nearly 30 cameos from major Hollywood stars.
• Judy Garland receives a credit in the film, but she only sings a song in the film.
• Jack Lemmon is dressed in costume for “Some Like It Hot” (1959) in his cameo. 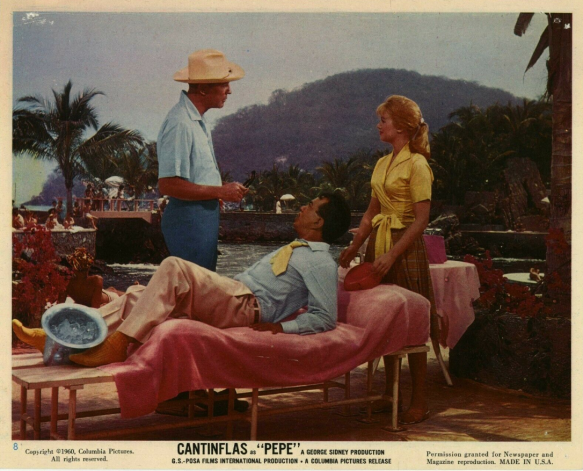 Highlights:
• Catching all of the cameos
• Dance performance with Shirley Jones and Matt Mattox 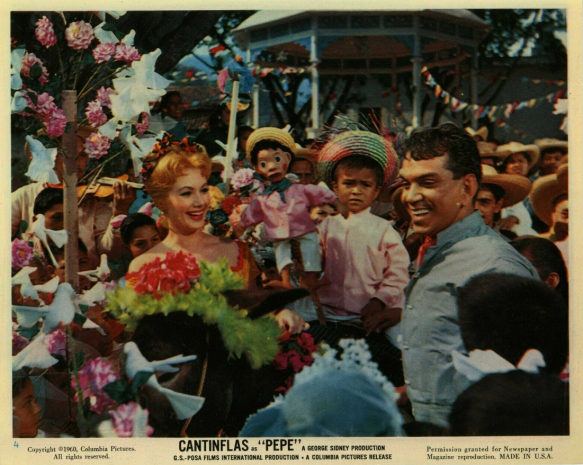 Shirley Jones and Cantinflas in “Pepe” 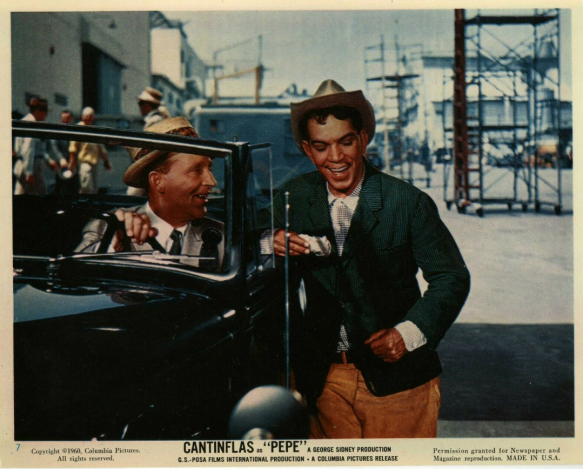 Bing Crosby and Cantinflas in “Pepe” 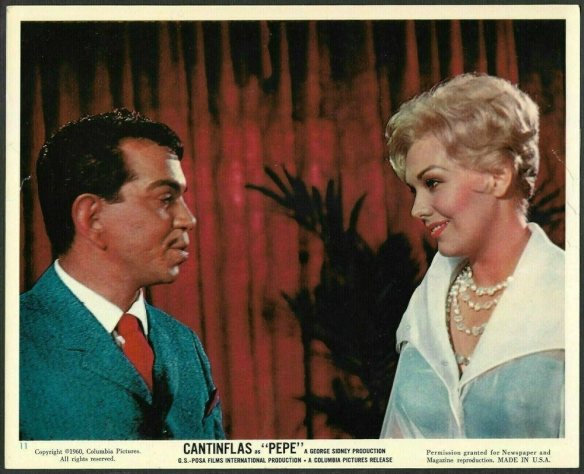 My review:
He was often compared to comedian Charlie Chaplin. Mario Moreno, who worked professionally as Cantinflas, was one of Mexico’s top film stars. His fame briefly took Cantinflas to Hollywood for two films: “Around the World in 80 Days” (1956) and this week’s Musical Monday, “Pepe” (1960).

However, because of the failure of “Pepe,” Cantinflas wouldn’t return to Hollywood.

The plot of Pepe is fairly simple: Pepe is trying to get his horse back, but the bulk of the film is Pepe running into Hollywood stars playing themselves.

Cantinflas, Dan Dailey and Shirley Jones are the three main characters not playing themselves, and their roles are rather thankless.

Cantinflas plays the title character of Pepe, who just wants to be with his horse pal. Pepe follows the horse from Mexico to Hollywood. His character is often made to look foolish, as he is confused by American lingo or other situations he encounters. Some of these encounters include Jack Lemmon changing back and forth from his “Some Like it Hot” character, or thinking someone’s life really is in danger, but it is just part of a dance performance. His character plays the stereotype of an innocent and not very bright Mexican. For example, he brings his piggy bank to buy an engagement ring and is hundreds of dollars short. He then is confused about how a gambling works while at The Sands casino.

Shirley Jones plays Suzie Murphy who is disgruntled about the entertainment business and life because of her parents’ experience in show business. Even still, Suzie has ambitions to be an actress.

Dan Dailey plays Ted Holt, a Hollywood director who bought Pepe’s horse. Holt is now viewed as unreliable and a has-been because of his drinking problems.

The three misfits (Pepe, Suzie, Ted) team up to raise money to make a film starring Suzy and Don Juan the horse. Pepe falls in love with Suzie, who is falling in love with Ted.

Now some could debate if “Pepe” is a musical or not, but in my mind, it absolutely is (especially since I have spotlighted musicals with fewer song and dance numbers than this one). As Pepe meets various actors, some perform like Maurice Chevalier. There are also two dream sequence dance numbers:
1. Dan Dailey and Shirley Jones performing to the vocals of Judy Garland.
2. Debbie Reynolds and Cantinflas dancing to “Tequila.”

There is also a “West Side Story”-like rumble number featuring Michael Callan, who originated the role of Riff in the Broadway production of “West Side Story” and Matt Mattox (of Seven Brides for Seven Brothers fame).

Phew! If that isn’t a musical, I don’t know what is.

Now, this musical is more of the showcase or revue than a textbook musical, meaning there is only one song that moves along the plot. Shirley Jones sings the song “Pepe” to cheer up the lead character. Jones, who is known for her beautiful singing voice, only performs one song in “Pepe,” which I thought was disappointing, especially because “Pepe” isn’t a very good song.

Dan Dailey, who also tap danced in several films with Betty Grable, is given weak dance numbers in “Pepe.” He was fine dancing in “Faraway Part of Town,” but it was more “modern” dancing and not the hoofing I was used to seeing.

Truthfully, the plot of “Pepe” isn’t very interesting or important. The most intriguing thing about this comedy is all of the Hollywood star cameos – from Billie Burke to Tony Curtis. Blink and you will miss one! 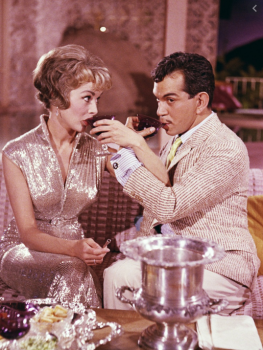 Cantinflas ends up in the home of Janet Leigh and Tony Curtis, Kim Novak takes pity on him and pays for an engagement ring, sings on the stage with Maurice Chevalier, meets the Rat Pack at the Sands casino, and Bing Crosby mistakes him for an autograph hunter.

I can understand why Cantinflas didn’t like “Pepe,” because his character is treated and acts like a child, and then he doesn’t even win the girl in the end.

Is “Pepe” a must see? Probably not. At 3 hours long, maybe the film would have received better reviews if it was shorter? But, despite its flaws, the cameos and music are relatively fun. It’s just sad that such a vibrant star like Cantinflas couldn’t have been better showcased.