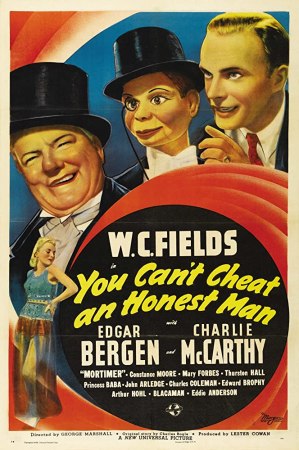 Plot:
Larsen E. Whipsnade (Fields) runs a financially failing circus. His children Victoria (Moore) and Phineas (Arledge) are trying to figure out how to help him. Phineas thinks Victoria should marry a rich man, Roger Bel-Goodie (Bush), to help out the family. Victoria visits the circus and meets The Great Edgar (Bergen) and his ventriloquist dummy, Charlie. Though she falls in love with Edgar, she thinks she should marry Roger. 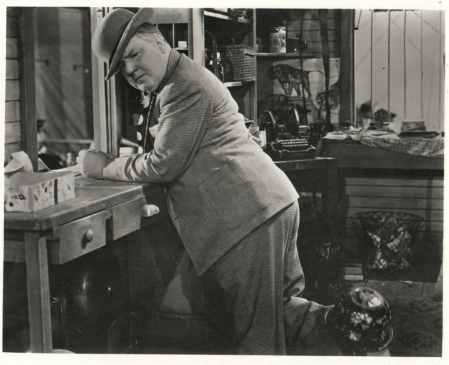 W.C. Fields in “You Can’t Cheat An Honest Man”

Other trivia:
• W.C. Fields turned down the role of the Wizard in “Wizard of Oz” to make this film. The Wizard was instead played by Frank Morgan.
• W.C. Fields was one of the writers of the script but was billed as Charles Bogle.
• In a Jan. 1939 letter to Universal Studio executives, Fields complained that a double of him was used for final scenes, rather than using Fields. 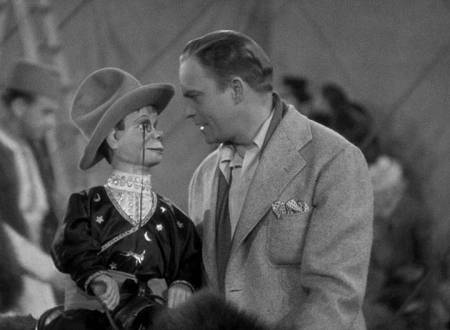 Charlie McCarthy and Edgar Bergen in “You Can’t Cheat an Honest Man.”

My review: Searching for the “1939 feature”:
Imagine that you are acting in a film … and a puppet gets higher billing than you.

Along with W.C. Fields, Charlie McCarthy stars in tandem with his mouthpiece Edger Bergen in this … exhausting comedy.

I’ll go ahead and be blunt: This is one 1939 film I didn’t care for. Other B and C budget 1939 films that I have reviewed rank higher than this one.

But people do enjoy, “You Can’t Cheat an Honest Man” – just check the ratings on IMDB and Rotten Tomatoes.

In the film, W.C. Fields plays a circus owner who is down on his luck. Most of the comedy revolves around situations at the circus, including Fields dressing as a woman and a German to escape the sheriff, or making it appear that Fields is walking naked through the circus after his bath (with an elephant trunk as a showerhead). However, the majority of the antics are led by Edgar Bergen and Charlie McCarthy, and occasionally Mortimer Snerd. Be prepared though – in one scene, ventriloquist dummy Charlie McCarthy is in blackface, which was both offensive and also unexpected. McCarthy doesn’t sing or do an act this way. It happens inexplicably after Fields and Bergen have a fight, and then there’s a puppet in blackface.

As an aside: an underrated film fact is that Edgar Bergen is a really terrible ventriloquist – you can see his mouth move! (This isn’t a new discovery for me – I just now am writing about Bergen and can share that thought).

I was excited to see John Arledge in the film playing Fields’s son, but sadly his role is not very large.

Eddie Anderson also has a brief role in the film, but sadly, his role was written as an obedient and not very intelligent stereotype.

I found most of the 80-minute movie exhausting and not funny. However, I did enjoy the scenes at the end when Fields was being introduced to the wealthy Bel-Goodie family. Fields’s brash character doesn’t mix with the high society crowd, so it’s fun to see that juxtaposition in characters. A highlight is also an entertaining ping pong scene. This whole situation was the most interesting part of the whole film.

I’m sure people out there just love this movie, but I’m sorry that I didn’t. I guess I just don’t like W.C. Fields – except for in David Copperfield (1935).