Plot:
Set in the 1850s, Sally (Dunne) travels in a medicine show with her father Doc Watterson (Walburn) and his partner Mac (Frawley). When their wagon catches on fire and burns down in a small Pennsylvania town, they stay with Peter Cortlandt (Scott) and his grandma (Patterson). Sally and Peter fall in love, and on their wedding day, Peter strikes oil. As Peter works to grow his oil business, Sally is frequently left alone.

Trivia:
• Songs by Oscar Hammerstein II and Jerome Kern and the story was developed by Hammerstein.
• Shot on location in Chino, CA.
• Irene Dunne was on loan to Paramount from RKO.
• Rouben Mamoulian’s final film for Paramount.
• The story was inspired by businessman Edwin Laurentine Drake, who built an oil drill in Pennsylvania. A reporter wrote to Hammerstein and Kern suggesting they write an operetta about it, according to “The Films of Randolph Scott.” 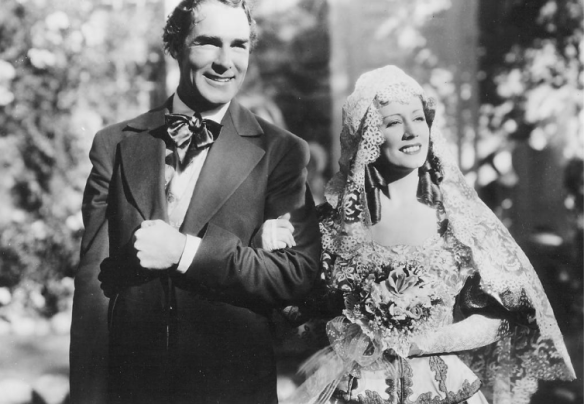 Randolph Scott and Irene Dunne in “High, Wide and Handsome”

My review:
“High, Wide and Handsome” is a little all over the place. The plot includes:
• A medicine show that is stranded in a small Pennsylvania town, leading to romance between Sally (Dunne) and Peter (Scott).
• Peter growing an oil business.
• Railroad leaders buying land to thwart the oil business
• Christians running out of dance hall girls, like Molly (Lamour), out of town.

It’s both a musical and also a look at the growth of oil and industrial America. The film even includes a battle between the bad guys and circus performers – elephants, strongmen, acrobats and all.

Despite the film not knowing quite what it is, and being a bit weird, I really liked it. I thought “High, Wide and Handsome” was delightfully fun, and I think I smiled the whole time while watching it.

Going into the film, Paramount studio head Adolph Zukor had high hopes for “High, Wide and Handsome.” Zukor told producer Arthur Hornblow to spare no expense ont he film. After the first previews, Zukor told Mamoulian that it was Paramount’s greatest film to date, according to Mamoulian: Life on Stage and Screen by David Luhrssen.

With a story by Oscar Hammerstein II, songs by Hammerstein and Jerome Kern, this was sure to be another success like Show Boat (1936).

Early reviews, like from The New York Times critic Frank S. Nugent, praised the musical; calling it spectacular and that it “move easily into the ranks of the season’s best.” But the audiences didn’t turn out for this film, and the studio didn’t make back the money spent to fund this film.

Zukor went from praising the film, to ignoring Oscar Hammerstein II when he saw him in public. Hammerstein’s Paramount contract wasn’t renewed, and this was director Mamoulian’s final film at Paramount, according to Luhrssen’s book.

Today, the film is compared to “Show Boat” (1936) and the Broadway success of “Oklahoma,” which didn’t come until 1943. With the relationship conflicts and absent husband, the “Show Boat” comparison makes sense, as does “Oklahoma” with the business conflicts.

But “High, Wide and Handsome” also stands on its own as a curious musical, that is extremely pleasant. I have seen it mistakenly called a western, which … it’s not at all. I think it was confusingly stuck in this genre of the Americana vibe. But it’s set in the United States east.

Irene Dunne and Randolph Scott are both extremely attractive in this film, and this was the second time the two were teamed together. The two previously co-starred in the musical “Roberta” (1935).

Dunne has a gorgeous operatic voice, something many people forgot a few years later when her career largely turned to comedy. Her character turns from medicine show performer to dutiful wife who pines away for her husband who is never home. The character change made me almost forget that she was a performer at the start of the film until she mentions it to Dorothy Lamour.

Scott plays Dunne’s go-getter husband, whose main focus is his goal of drilling for oil. As he finds success, his business is given more attention than his family. While he is giving no attention to his wife, you also can’t hate his character – it’s like he’s too excentric to realize that he needs to work on his family life. Scott’s career later turned more to westerns, so these early roles are fun. His character of Peter is excited and exuberant, but also a bit clueless that he never sees his wife.

As soon as an oil well erupts on the wedding day of Sally and Peter, you can see that Sally will play second fiddle to the business.

While the whole supporting cast is outstanding, Elizabeth Patterson as Scott’s grandmother steals the show (when doesn’t she?). Patterson’s character is adorable and hilarious, but also may have more brains than anyone else in the film.

William Frawley (who most today know from “I Love Lucy” or “My Three Sons”) also plays a small supporting role. We have the added bonus of seeing Frawley, and a former vaudeville performer, singing at the wedding of Dunne and Scott’s wedding.

Alan Hale is one of our villains in this film. Hale could seemingly play any role, from kindhearted to dastardly. Hale’s character of Walt Brennan is the type that laughs and is friendly as he gives you an ultimatum that will ruin you.

One disappointing aspect is Dorothy Lamour’s character. Lamour was still in the early stages of her career and is a small supporting character here as a saloon girl with a heart of gold. The scriptwriters did fool me, as I figured Lamour’s character of Molly would steal Peter away from Sally. Instead, the two ladies become friends.

“High, Wide and Handsome” is also a visually gorgeous film. The cinematography by Victor Milner and Theodor Sparkuhl is really striking. Travis Banton’s late-1800s costumes are also gorgeous – who else cringed when Dunne’s character got oil all over her antique wedding dress?!

Hammerstein and Kern’s music is all lovely and well suited for its performers.

I think some reviews are a bit harsh about this film. It’s a little odd and maybe not well-focused, but it’s also fun.