Plot:
Frankie Foster (Shirley) is the lead in a failing Broadway musical. In order to get a flight to Washington, D.C. to discuss getting a loan for the show, Professor Carl Roberti (Walburn) says that Frankie is the secret bride of war hero Johnny Pearson (Terry). As a result, the secret gets out and the show becomes a success. While Frankie and Johnny have to pretend to they are married, things get complicated when his mother (Darwell) arrives, and Frankie’s boyfriend and co-star Stanley Benson (Day) is jealous.

Trivia:
• Working title was “Here Comes the Bride” and “Cocktails for Two”
• Leon Errol was originally supposed to be cast in the film. 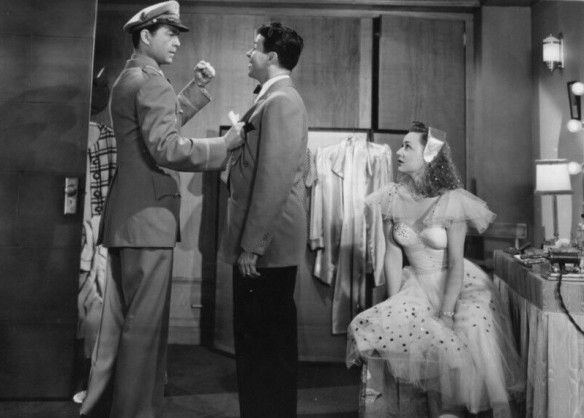 Notable Songs:
• “One Night in Acapulco”
• “When Romance Comes Along”

Awards and Nominations:
• Stephen Dunne was nominated for an Academy Award for Best Sound Recording. The winner was Edmund H. Hansen for the film “Wilson.”

My review:
Only eight minutes into “Music in Manhattan” (1944), I could recite the whole plot for you without having to watch the rest:

With wartime conditions, getting a plane reservation isn’t an easy task – so someone fibs and says that Frankie (played by Anne Shirley) is the secret bride of a war hero (played by Phillip Terry) – which of course she isn’t. From there, you automatically know that the two will fall in love and the floundering Broadway show Frankie stars in will succeed, because the “secret” will be leaked.

I wasn’t wrong, but despite the predictable plot, this is still a cute and charming B-budget musical. And I was relieved that Shirley ended up with Terry and not the leading man she started out with – singer Dennis Day.

The songs in the film are catchy, though I wasn’t sure if Anne Shirley was singing or dubbed, and I couldn’t find this documented.

An added bonus to this film is character actress Jane Darwell, who plays the sweet mother of Phillip Terry, believing she has just acquired a daughter-in-law.

Running at 82 minutes, there isn’t much to say about this movie. There is nothing groundbreaking about the plot, but if you enjoy a 1940s wartime era musical comedy like I do, it’s a pleasant way to pass the time.