Trivia:
• In her autobiography, Doris Day says “Calamity Jane” was one of her favorite musicals.
• A made-for-TV version of this film aired on CBS in 1963 starring Carol Burnett and Art Lund.
• In 1944, a “Calamity Jane” project was announced with Ann Sheridan and Jack Carson with a script by Jerry Wald. In 1946, Delmer Daves was announced as director. When the 1953 project with Doris Day and Howard Keel was announced, it is unclear if any of Wald’s material was used, according to the American Film Institute.
• Howard Keel was on loan to Warner Bros. from MGM for this film.
• Joel McCrea let Doris Day ride his horse in “Calamity Jane,” according to a TCM article.
• The governor of South Dakota Sigurd Anderson turned down an invitation to the South Dakota premiere of the film, because he didn’t feel Calamity Jane was a figure worth celebrating. However, Warner Bros. worked with the local governments and chamber of commerce of Deadwood, Lead, and Rapid City who held premieres of the film, according to the American Film Institute.
• The real Calamity Jane, birth name Martha Jane Canary Burke, was born in 1850 and died in 1903. The real Wild Bill Hickcok was born in 1837 and died in 1876. Though Calamity Jane claimed they were married, there is no record of their marriage. 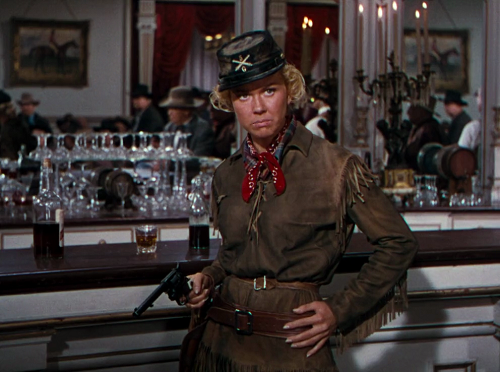 My review:
The first time I watched “Calamity Jane” goes down in Pickens family household lore.

When my interest in classic films started at age 13 or 14, my parents and I sat down and watched a plethora of classic films; particularly musicals and Doris Day films. Good or bad, we watched them all.

But there’s only one movie either one of my parents walked out on: Calamity Jane.

I never had seen “Calamity Jane” before and received it as a Christmas present as surprise because it hadn’t been shown on television and I was dying to see it. During Christmas break, my parents and I sat down to watch this long-anticipated musical. The first few bars of “The Deadwood Stage” open up as the film begins and there’s Doris Day as Calamity Jane hanging on to a stagecoach barreling towards home and singing “The Deadwood Stage.”

All of a sudden, we looked around and Dad was gone, never to return. This is one of the few times anyone has abandoned a movie.

So the other day we tried to have a family viewing again – and I’m happy to say everyone stayed in the room.

As I’ve noted in the past, Doris Day is one of my all-time favorite performers, so I will watch Day in just about anything. While “Calamity Jane” isn’t my favorite Doris Day film, it’s still a lot of fun.

“Calamity Jane” is purely fictional. Though the characters are based on real-life individuals of the Wild West – Calamity Jane and Wild Bill Hickok – don’t expect to learn anything about these folks from this film. In fact, while Jane and Bill end up romantically involved in this film, that doesn’t seem to be the reality (Jane says they were married, but there is little proof that they even were romantically connected. The real Calamity Jane made sure she was buried next to Bill, though. All strange).

The story revolves around Calamity Jane trying to find a well-known actress to perform in Deadwood, SD. Thinking she’s bringing back a headliner, she is really bringing back the headliner’s maid, Katie Brown (McLerie). The two become friends and live together in Calamity Jane’s cabin, but Calamity soon finds that she’s jealous when the lieutenant (Carey) she’s sweet on really likes Katie. Bill also liked Katie, so in their desolation, Bill and Jane turn to each other and fall in love.

With songs by Sammy Fain and Paul Francis Webster, the songs are outstanding. My personal favorites are “The Deadwood Stage,” “Secret Love” and “The Black Hills of Dakota.”

However, I do give Fain and Webster a slight sideeye. Some of their songs seem to be inspired by other western musicals of the time. The rivalry duet “I Can Do Without You” is reminiscent of “Anything You Can Do” from “Annie Get Your Gun.” “I Just Blew in from the Windy City” is also similar to “Everything’s Up to Date in Kansas City” from “Oklahoma” – down to demonstrating a dance for the listening crowd.

There are only a few songs I don’t care for. Howard Keel’s solo “Higher than a Hawk” is incredibly dull, and he even said he didn’t like it in his autobiography.

I also don’t love “A Woman’s Touch” as Jane and Katie redecorate the cabin. For starters, it’s musically dull. Also, the mess that was Calamity Jane’s cabin needed much more than a “touch.” The two went to work and transformed the mess (with boarded up windows, holes in the front door and burlap curtains) into an adorable cabin straight out of “Better Homes and Garden.” I had to laugh, because the transformation they did to that house would have taken months.

While watching this film, I was struck by how extremely athletic and physical Doris Day’s role was in this film. She danced in several other films before this, but nothing compared to “Calamity Jane.” She danced, jumped up and slid across the bars, was lifted and lowered by men from the floor to a balcony, and she road horses. It’s no wonder that she became ill from exhaustion (according to her autobiography) after this film. But it was all amazing to watch. Hands down, this is her most physical film role, and it’s amazing to watch.

Howard Keel and Doris Day make a great team in this film and are both complimentary of each other in their autobiographies.

The supporting cast is adequate. I thought I remembered Dick Wesson’s character being annoying, but I thought he was fine. Allyn Ann McLerie and Philip Carey are adequate but feel forgettable, especially Carey.

Overall, “Calamity Jane” is great fun. It’s colorful and has fabulous music. If you had trouble with it the first time you watched it (like my dad), give it another shot.