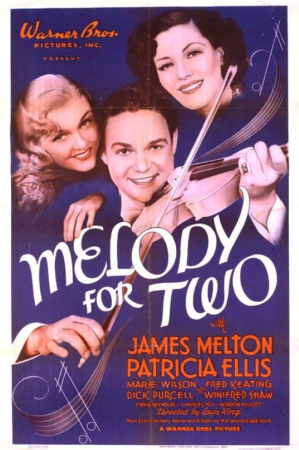 Plot:
Bandleader Tod Weaver (Melton) has a hard time finding success and is unhappy. Tod is unhappy that he’s scheduled to play at a small-time venue while his girlfriend singer Gale Starr (Ellis) performs at a top-notch nightclub. However, when Weaver’s band and singer Lorna Wray (Shaw) play swing music (thanks to an idea from janitor Exodus Johnson, played by Eddie Anderson), Weaver’s band finds success while Starr’s nightclub act does poorly.

Trivia:
• The film introduced the song “September in the Rain.”
• Working titles were King of Swing and Special Arrangements
• James Melton’s last film under contract to Warner Bros.

My review:
I’m afraid I can’t even call this a B-movie; I would call it a C-picture with a third-string cast.

Our romantic leads are James Melton and Patricia Ellis, and it’s no wonder that this was Melton’s last film under contract with Warner Bros. Other than singing well, Melton is a lousy actor.

They would have been better off putting some of the secondary characters in the leads, like Dick Purcell, Fred Keating and Marie Wilson.

The film’s start feels a bit confusing and haphazard, and I only feel like it improves when Eddie “Rochester” Anderson and Wini Shaw appear. Anderson gives the band the idea to play swing music, and we are treated to a dance number from him. Wini Shaw can also certainly sell a song better than Patricia Ellis.

The film’s main highlight is hearing “September in the Rain,” which was introduced here for the first time. (Though personally, my favorite version of the song is performed by Chad and Jeremy nearly 30 years later).

Mercifully, this film is only 60 minutes.