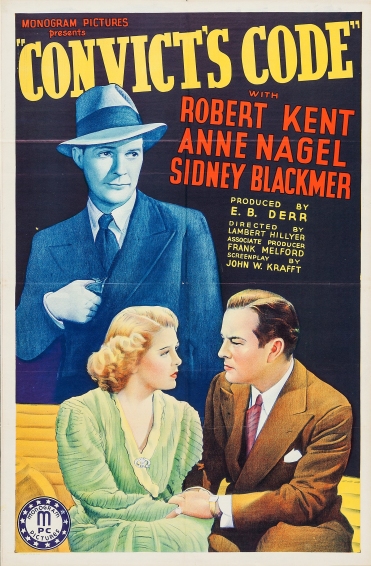 Plot:
Former football hero Dave Tyler (Kent) was just released after serving a stretch in jail for a crime he was framed for. When he’s released on parole, he is determined to find who framed him and prove his innocence. All the while he’s working for Gregory Warren (Blackmer) at an investment firm who may know something about Tyler’s arrest.

Other trivia:
• Working title was Paroled to Exile

My review: Searching for the “1939 feature”:
Film studio Monogram Pictures specialized in making low budget films from the 1930s and into the early 1950s. This week’s 1939 film, CONVICT’S CODE, was released by Monogram and runs at a brisk 62 minutes.
The film follows a paroled man, Dave Tyler (Robert Kent), who was framed and trying to find revenge. While out on parole, Dave ends up working for the guy (Sidney Blackmer) who got him friend, and Dave falls in love with his sister, Julie (Nagle). What’s a guy to do?
The plot is a bit run of the mill, but it does have a random plot point that doesn’t make much sense until the very end: Dave Tyler was previously a college football star. Throughout the movie I’m thinking, “So what’s the deal with the football angle?” It isn’t until the end that Tyler was framed so that he wouldn’t play in a big game that Blackmer’s character was betting on. Why not just injury him like Nancy Kerrigan instead of send him to jail? I digress …
Sidney Blackmer really carries the film, while the lead actors are a bit bland. However, Ben Alexander — later of “Dragnet” TV fame — has a small role in the film. Though he doesn’t have much screen time, he seems to be the most capable of the actors.
But the most notable thing about this week’s 1939 film is that I have found a new actor who has been in the most films in 1939. Previously, Irving Bacon had the honor with 36 film roles in 1939. Now, Harry Strang, who has a small role of someone Dave Tyler seeks out for answers, has the honor with 44 film roles in 1939.