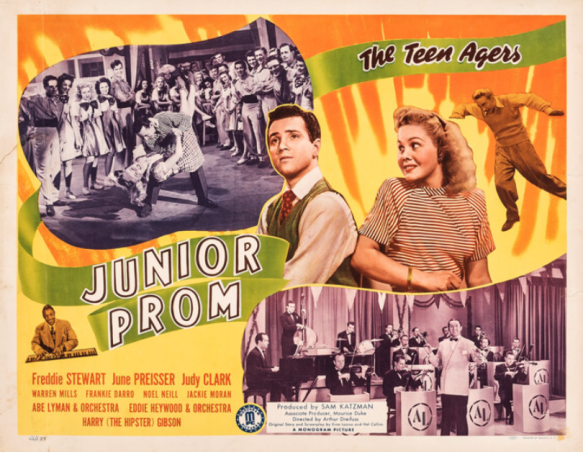 Plot:
Freddie Trimball (Stewart) is the logical choice for student body president of Whitney High School. But when the father of Jimmy Forrest (Moran) promises new football uniforms if Jimmy wins, the students — and school staff — are more interested in backing him for president. The school election also puts the Rogers sisters at odds when Dodie (Preisser) and Addie (Clark) back Freddie. But Betty (Neill), who is the editor of the newspaper, backs Jimmy in her school paper—especially when she’s wooed by his pal Roy (Darro).

Trivia:
• The first of the Teen Ager film series.
• Judy Clark plays Addie Rogers in this film, but Addie is played by Anne Rooney in the other Teen Ager films.
• The only film of Harry ‘The Hipster’ Gibson
• Working title was “High School Kids”
• Freddie Stewart’s first credited film. 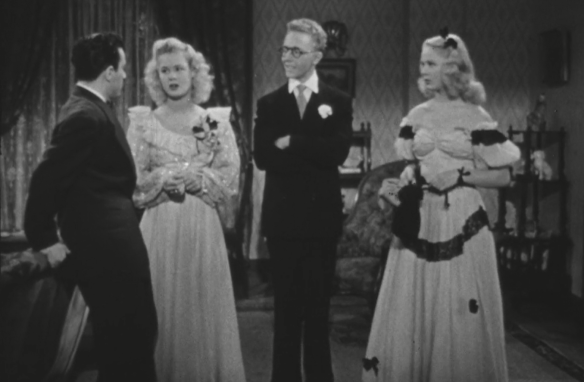 Highlights:
• Eddie Heywood and His Band performing his arrangement of “Loch Lomond”

My review:
While the words “teen” and “teenager” have been common place in the American Language for over 50 years, it wasn’t commonly used until the 1940s.

The word “teenager” first appeared in print in an April 1941 Popular Science magazine article. Later, LIFE magazine did a feature with photo by Nina Leen called ““Teen-Age Girls: They Live in a Wonderful World of Their Own” in their Dec. 11, 1944, issue.

The word and teenage culture were further cemented in the Monogram Pictures “Teen Age” series, produced by Sam Katzman. Starting with the first film JUNIOR PROM (1946), the post-war, low-budget musical comedies weren’t much to write home about, but they celebrated teen culture with proms, school elections, sodas at the Teenage Canteen, dates and school newspapers.

In JUNIOR PROM, we first meet the students scoffing at opera in their music appreciation class, because it doesn’t “send them” like jive music. And then we get to the plot: The principal has been offered a bribe. A wealthy community member wants his son Jimmy Forest (Jackie Moran) to win student body president and says he will fund new football uniforms. However, friendlier and more popular Freddie Trimball (Freddie Stewart) also planned on running for president. While Freddie doesn’t have the funds, he writes music for the school shows. Whitney High is divided with the school election, including the Rogers sisters when two endorse Freddie but their newspaper editor sister has backed Jimmy.

Most of the actors are no longer teenagers and most are in their late 20s, but that isn’t too unusual. Most of them still appear youthful. There are only two that look a bit too old. Former child actor Frankie Darro was nearing 30 by the time the film was released, and was most likely cast because of his height.

Prior to seeing this film, I wasn’t familiar with Freddie Stewart. Stewart began his career as a singer, and JUNIOR PROM was his first acting role — and he also was the lead actor in the Teen Ager series. He’s charming and has a pleasant voice.

June Preisser plays Stewart’s girlfriend in the films. Preisser was signed to MGM when she was 19 and played the blonde who would try to steal Mickey Rooney from Judy Garland in BABES IN ARMS (1939) and Andy Hardy films. In addition to her blonde hair and baby talk voice, Preisser also danced in an acrobatic fashion where she did backflips and stunts. Initially specializing in teen and young adult roles, it seems Preisser wasn’t able to grow out of these roles as she continued them with the Teen Ager series.

Noel Neill as the high school newspaper editor and Jackie Moran as the wealthy boy running for student body president are highlights — mainly because I love Jackie Moran.

This low budget musical is really all it needs to be. It’s fun, has some toe tapping tunes, and has some legitimately funny scenes. And if you want to dig a bit deeper, JUNIOR PROM and the Teen Age series films give a glimpse into post-war youth culture. Other than maybe Freddie Trimball, most of the actors are flawed and scattered—just like teenagers. Their biggest troubles are who will win student body president and will they have a date for the prom.

Also at one point, the students are dancing in the classroom after their teacher steps out. Ridiculous? Sure, but who wouldn’t want to dance in class? That sounds fun to me!

For some reason, these Teen Age series movies seemed to merit to be given the RiffTrax treatment. Some people love this comedic commentary, but I find it eye roll worthy. Not every movie is an Academy Award winner, but these are at least cute and fun.

These films were meant to be funny … so I don’t get making fun of them. Also, when JUNIOR PROM was released, it was reviewed favorably in Variety:

“Young talent and smooth, well-balanced production aim JUNIOR PROM for good reception in its market. Mélange of songs, dances and groovy music by featured orchs assure the juve appeal, but it is also pleasant enough to get by with the oldsters.”

The only criticism is that Variety felt Moran and Darro had “grown a little beyond their assignments.” I find the downside to be Harry the Hipster in a role that is thankfully small.

Outside of the song, there are also some outstanding musical highlights, particularly from Eddie Heywood and his band performing his arrangement of “Loch Lomond.”

Overall, this is an entertaining film, that I don’t feel is it should be made fun of. It’s silly but also good fun that makes me wish I went to this high school.