Even as summer winds down, I’m still grasping to the last few weeks of summer until the fall season begins at the end of September.

Reading “Summer Movies: 30 Sun-Drenched Classics” by John Malahy is the perfect read to keep the summer feeling. Malahy highlights quintessential summer films, from MOON OVER MIAMI (1941) and GIDGET (1959) to JAWS (1975); each putting you in the sun and sand mood regardless of the weather. 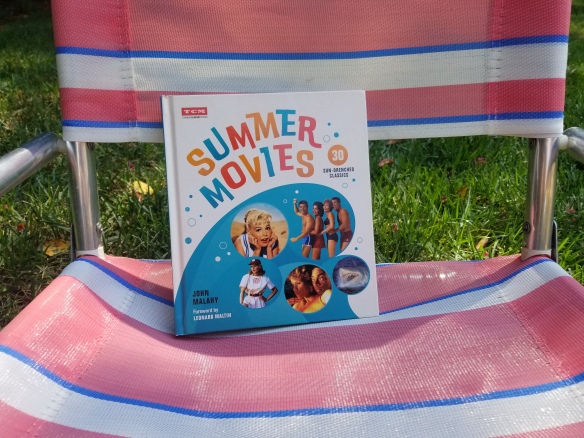 I interviewed author John Malahy via e-mail about the inspiration for his book and how he selected the films:

What was the inspiration for your book?

There are several movies that I’ve loved for years that are set in the summertime, Jaws and Do the Right Thing in particular, and I always thought it would be fun to bring together diverse movies like this under the same banner and compare how they depict the season. Just like you can watch Christmas movies around the holidays or scary movies on Halloween, there are a lot of summer-set films that can help get you in the mood for the warm weather – whether that means a trip to the beach, a big European getaway, summer camp, or just staying in the city. These movies typically feature characters getting outside of their routines, but summer can also be a transitional time for some people, as in The Graduate, where Benjamin Braddock feels adrift (and literally drifts around in his pool) the after finishing college. The movies have a lot of different things to say about how we experience the summertime and what the season means.

How did you narrow down the summer movies that were selected? Did the films have to meet a certain criteria to be included?

I wanted the films to be explicitly set – at least for the most part – during the summer months. So that meant cutting out films like Grease that take place mainly during the school year, or spring break-set films like Where the Boys Are. A couple of exceptions made it in; Moon Over Miami I believe actually takes place during the fall and winter, but the Florida the film depicts represents a traditional summer-like escape for the characters and the film’s tone fits perfectly within the book. I was also looking for more universal stories or situations, so that readers could relate to the summer the characters were experiencing. Independence Day takes place during the summer, but it’s not most people’s understanding of the Fourth of July. The Music Man, on the other hand, shows what an idealized Fourth looked like in an average midwestern town at the turn of the century, and the movie has a lot of say about American traditions and politics.

I also tried to pick representative films rather than being too redundant. Beach Blanket Bingo represents the rest of the ‘60s beach party movies. A League of Their Own is the only baseball movie in the book. And of course I wanted all the movies to be worth recommending, so no clunkers allowed.

Do you mind sharing a few of the movies that didn’t make the cut?

I started with a longlist of over 300 movies, so there are many that didn’t make the final book. They stretch back to the silent era (only 1928’s Lonesome made it in) and up to movies like Spider-man: Far from Home and Crawl from just a couple years ago. There was a wide variety that were just on the cusp, like the Marx brothers film The Cocoanuts, King Vidor’s Street Scene, the sports musical Take Me Out to the Ball Game, and the Esther Williams movie Million Dollar Mermaid. I actually wrote a full entry for Hitchcock’s The Man Who Knew Too Much (1956) but it was later replaced by Rear Window. Some later ones are Summer of ’42, the original Italian version of Swept Away, the summer camp horror film Friday the 13th, Stand by Me, and The Talented Mr. Ripley.

What is your all-time favorite summer film?

This is such a tough question! I’m partial to the 1955 film Summertime with Katharine Hepburn. It was shot in Venice, Italy, and I was lucky enough to spend some time there a few years back and I absolutely fell in love with it. I even went around to several of the movie’s locations – which look much like they did in 1955 – and was able to relive her adventures (except falling into the canal). I love traveling, so any movie that features globetrotting characters is right up my alley.

That said, my favorite movie of all time might be Rear Window. So maybe that?

I know you mention silence Lonesome and Speedy, but what would you say is the earliest summer-like film?

The earliest one on my longlist was a Charlie Chaplin Essanay comedy short called By the Sea, which was advertised as a “classic of girls, the seashore, and the good old summer time.” It was actually shot on location at the beach, but otherwise it’s not a particularly noteworthy summer film. There were a couple of Clara Bow features from the mid-twenties on the list: Mantrap, in which she escapes the city to spend time at the lake; and Hula, in which she plays the daughter of a Hawaiian pineapple farmer. Ultimately I felt like some of these movies covered ground that was better handled in later films, but the level of craft on display in Lonesome and its recommended double feature, Speedy, were just too great to ignore.

You can find this book on the TCM Shop and wherever books are sold.