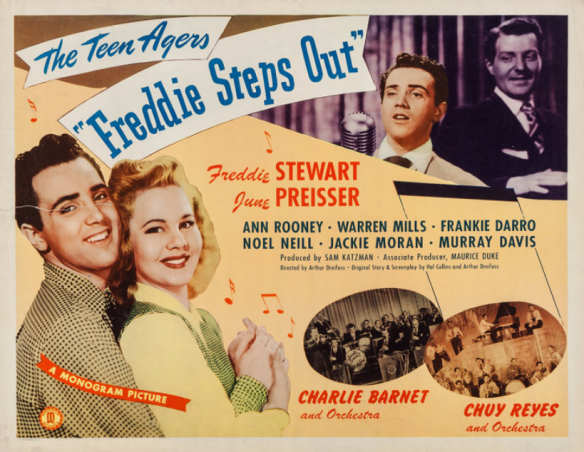 Plot:
Crooner Frankie Troy (Stewart) is fed up with show business and disappears. High school student Freddie Trimball (also Stewart) is the spitting image of Troy, so Freddie’s friends try to get the disappearance reward money by taking advantage of the likeness. Frankie has a wife and baby, and when his baby gets dumped on Freddie and his friends, trouble ensues.

Highlights:
• Elderly ladies singing on the radio
• The visual jukebox Freddie brings to the Teen Canteen
• Dancing in the “Let’s Drop the Subject.” 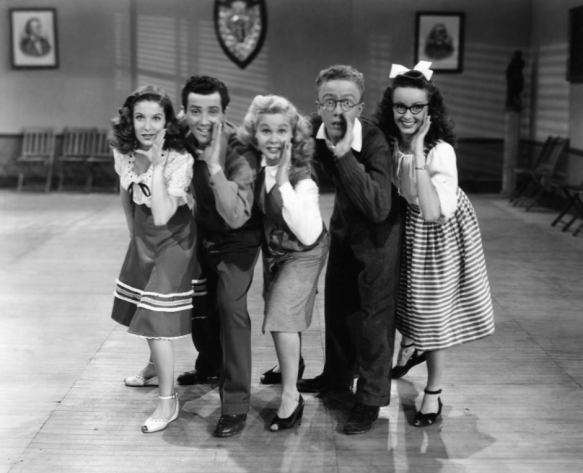 My review:
A month after JUNIOR PROM (1946) was released, Monogram Pictures released another Teen Agers film: FREDDIE STEPS OUT (1946).

In the second of eight Teen Ager films, Freddie Stewart plays a dual role: Crooner Frankie Troy and Whitney High Student, Freddie Trimball. Frankie decides he’s fed up with show business and disappears. Freddie’s classmates see how similar he and Frankie look. They write Frankie’s agent saying they found the singer so they can get a reward, saying the singer has amnesia and so that’s why he won’t know who he is. The plan of course goes wrong, when Frankie’s wife shows up with her baby. The baby then gets passed around to the students, because they don’t know who it belongs to.

There are some oddities here, but I understand why they did it. Monogram Pictures assumed their audience wasn’t very bright, because the film starts saying Dodie (June Pressier) took a year off from school for an illness that’s never explained. Of course, this briefly is tied into the baby mystery, as the principal wonders if the baby is Dodie’s. However, with the two series films being released a month apart, it’s a bit weird (though I know it’s just a story).

The baby antics get tiring, but the baby, played by Terry Lee Carlson, is adorable.

While I prefer JUNIOR PROM to FREDDIE STEPS OUT, this one still has some laughs and fun tunes.