Plot:
When David (Greene) was a baby, his mother Clara (George) took David and left her husband Duke (Dix), because he couldn’t keep a job and was an alcoholic. Clara later marries a wealthy man and David grows up in society; eventually starting college at Stafford University. While at Stafford, David meets Professor Daniels (Young) and his daughter Simpson (Joyce). Professor Daniels knew David’s real father and speaks highly of him as an athlete and writer. David seeks out his father and their relationship changes some of his views. 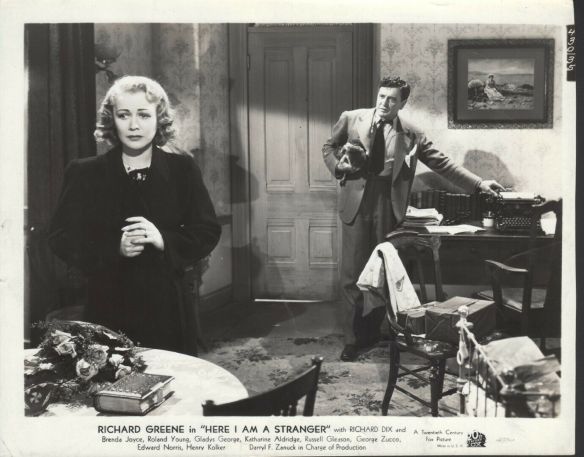 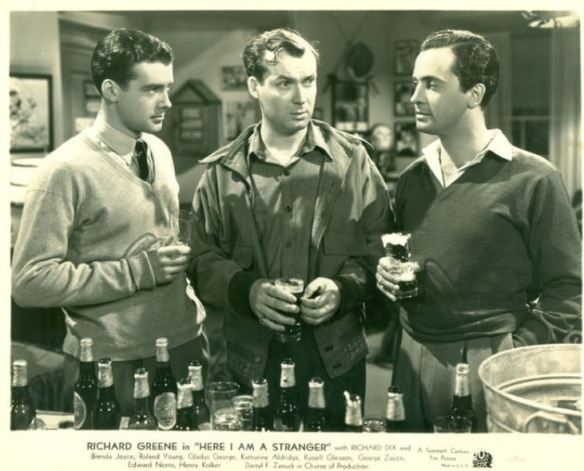 My review: Searching for the “1939 feature”:
All of you know I love a brisk film that runs just over an hour. But for once, I am saying a movie should be longer. Running at 82 minutes, I’d love to see a bit more of HERE I AM A STRANGER (1939).

The story is about an estranged father and son, Duke (Dix) and David (Greene). David’s mother (George) left Duke when David was just a baby. After growing up in society with his stepfather, David seeks out his father after he starts college at Duke’s alma mater, Stafford University. David’s professor (Young) speaks highly of Duke; making David curious about seeking him out. David’s mother isn’t happy that he is building a relationship with Duke; feeling the past is best left alone. David’s new relationship with his father changes some of his views on life, and makes him see things differently from his mother and stepfather.

From start to finish, this movie is equally gut-wrenching, sweet and funny. Richard Dix does a wonderful job of playing the alcoholic father who connects with his son. The way Dix still calls Richard Greene’s character “Davey” like he’s a little boy, because that’s how he last knew him was heartbreaking and sweet.

On the flipside, there are some fun and quirky characters, particularly the father and daughter characters played by Roland Young and Brenda Joyce. Young is Professor Daniels, known to the students as Dopey Daniels. He doesn’t have much screen time, but he’s funny and adorable (per usual).

Brenda Joyce plays Simpson, the professor’s daughter. She doesn’t have much time for the male students and pretty much does and says what she wants in a free-spirited manner. It looks like Joyce has a wonderful time playing this role. In one scene, she opens the door to Richard Greene and Russell Gleason’s characters while eating an apple. While talking to them, she tosses the apple core out the door.

Interestingly, newcomer Richard Greene gets top billing over Dix. While there isn’t anything necessarily that standouts in his performance, I enjoy Greene’s roles and he does well in this film.

It’s also nice to see Gladys George in a film where she gets to look sophisticated.

One standout performance is performed by Russell Gleason, who plays Tom Sortwell. Sortwell is a bit of a slow, awkward student who is working his way through college by delivering laundry. Sortwell is an easy target for the other wealthier students. He’s naïve and doesn’t always seem to realize that he’s part of a joke, which makes his performance all the more touching and heartbreaking.

The reason I wanted the film to be a bit longer is because I still had questions. I wasn’t sure how things ended up for David and his mother. And I wanted to see more of Roland Young, who really needed more screen time. I also would have liked more reassurance that Sortwell ends up okay.

But I really enjoyed this film. It had me laughing, gasping at the snobbery from some characters and practically shouting at my TV during the climactic scene at the end (don’t worry, I was viewing this alone).

I highly recommend this little-seen 20th Century Fox film. It’s a rare gem, and it should be discussed more in the 1939 list of greats.