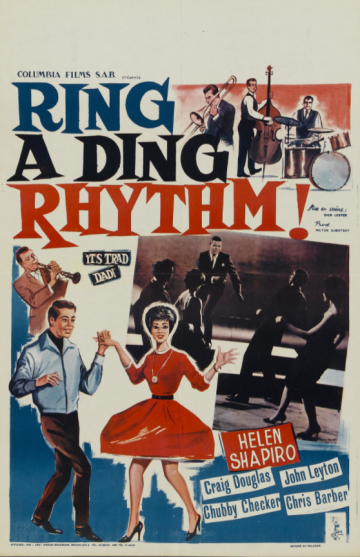 Plot:
The mayor (Felton) hates the jazz that the teens in town are listening to, and tries to ban the jukebox in the local coffee shop. Helen and Craig (themselves) plan a jazz festival to bring the adults around to that style of music. The pair travel around to different studios and night clubs to persuade disc jockeys and musicians to perform.

Highlights:
• Interesting filming of music performance
• Breaking the fourth wall and getting help from the narrator
• Gene McDaniels performance and the beautiful way it’s shot

My review:
Who knew kids in England REALLY liked Dixieland jazz in the 1960s?
This English film may be short on plot, but heavy on jazz and also some rock n’ roll. The film centers around a town where the teens gather at a coffee shop to watch jazz bands on TV or listen to them on the jukebox. The mayor doesn’t like this and works to get this music banned. With hopes to win the adults over, teens Helen and Craig travel around recruiting bands and disc jockeys for a jazz festival.

There isn’t much of a plot: there’s a narrator and Helen and Craig walking around and then we see a musical performance. But it’s a great showcase of jazz, pop and rock performers.

And while there isn’t much plot, there are also parts that are pretty funny. For example, the group the Temperance Seven are pretty humorous. At one part, they begin singing in French and subtitles in French appear on the screen. Our lead characters also break the fourth wall and communicate with the narrator.

The musical performances are also filmed in an innovative fashion, rather than just the camera straight on with the singers (like many of these musical showcase films do). There’s a mix of rapid edits from close ups to long range shots. An early musical performance brings the performers in like a puzzle on a white space.

My favorite musical performance was by Gene McDaniels, who was filmed against solid black and only he is lit with his cigarette smoke going all around him. I also enjoyed Del Shannon and Chubby Checker.

I’ll admit, a little bit of Dixieland jazz went along way in this brisk 77 minute film, but it was still a surprising good time.