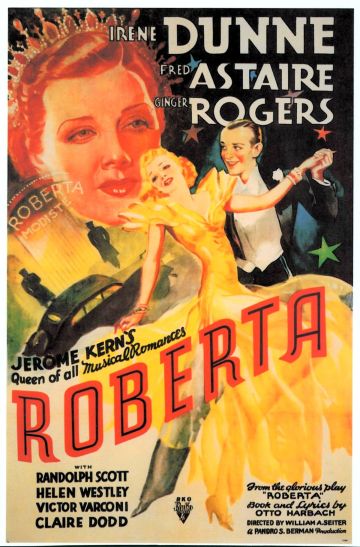 Plot:
Former American football hero, John Kent (Scott), travels to Paris with his pal Huck Haines (Astaire) and Haines’s jazz band. Huck and his band fail to secure a job, and the group is down on their luck. John seeks help from his Aunt Minnie (Westley) who runs an exclusive fashion house, immediately falling for her assistant Stephanie (Dunne). The jazz band finds success with the help of a phony countess (Rogers). But things get complicated when John inherits the fashion house.

Trivia:
• The story is based on the novel “Gowns by Roberta” by Alice Duer Miller. The book was made into the Broadway play “Roberta,” which ran from Nov. 18, 1933, to July 21, 1934. The Broadway show starred these actors before they were in films: Tamara Drasin, Bob Hope, George Murphy, Lyda Roberti, Fred MacMurray, Fay Templeton, Ray Middleton, Allan Jones, and Sydney Greenstreet.
• Later remade as “Lovely to Look At” (1952)
• Third film pairing of Fred Astaire and Irene Dunne. It’s the only
• First of three films that Irene Dunne and Randolph Scott co-starred in.
• Choreographer Hermes Pan’s first onscreen credit. 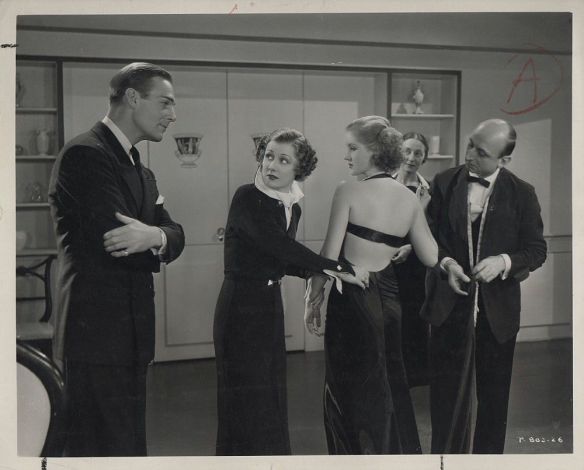 Highlights:
• When Astaire and Rogers are tapping at each other like they are having an argument but with no words, just tapping.
• The fashion shows, costumes by Bernard Newman

I like it because it’s different, compared to their catalog of 10 films together. Part of this difference is that it was only Astaire and Rogers’s third film together. And this third pairing cemented their success in a way their previous pairings (Flying Down to Rio, The Gay Divorcee) hadn’t.

“Roberta” mixes music and fashion as a jazz band (led by Astaire as Huck Haines) travels to Paris for a gig. Once their arrive, it turns out they aren’t wanted for the job after all. Huck meets up with an old friend, Lizzie (Rogers), who is posing as a countess. With her influence, Haines gets a job. But Rogers and Astaire are really the supporting characters here. The stars of the film are Randolph Scott and Irene Dunne. Scott plays John Kent, who comes to Paris with Haines, along for the ride after experiencing a broken heart. He’s immediately smitten with Stephanie (Dunne), who works for his Aunt Minnie (Westley). John leans on Stephanie when he inherits the fashion house from his aunt, but their romance is threatened when his ex (Dodd) shows up.

“Roberta” is a delightful film.

Most people today may know Irene Dunne for her comedic films, “Roberta” gives us the opportunity to hear her sing. The following year she would star in “Show Boat” (1936). Dunne’s “Smoke Gets in Your Eyes” is just wonderful.

The dance numbers in “Roberta” are magnificent. I particularly love “I’ll Be Hard to Handle.” Rogers is in pants, so it’s easier to see her tap dancing, and the two look like they are genuinely having a good time. There is a fun part of the dance where they are having a “conversation/argument” just with tap steps.

This film also got me to thinking. I’ve often heard people say that Fred Astaire made tap dancing “look easy.” As someone who does tap dance, I have to disagree. Astaire makes it look smooth and clean, but what he’s doing does not look easy. It looks complex and difficult because it was – he was an outstanding dancer.

Outside of the music and comedy, “Roberta” is a feast for the eyes for fashion lovers. With gowns by Bernard Newman, the fashion house setting allows for some wonderful creations. One of the gowns is even used to double-cross Claire Dodd, who is usually up to no good in these films.

I had to laugh at a scene where Fred Astaire talks about “pockets in all dresses, including the evening ones.” I know it was meant to be a joke, but I thought “Wow, we’ve been talking about how women want better pockets since 1935.”