Plot:
Johnny (Presley) is a singer on a riverboat. Much to the chagrin of his girlfriend Frankie (Douglas), Johnny gambles all of his salary away, because he’s constantly on a losing streak. A gypsy tells Johnny that a redhead will bring him luck. When redheaded Nellie Bly (Kovacs) comes aboard, Johnny woes her, getting himself in trouble with Frankie, and Nellie’s boyfriend (and his boss), Braden (Eisley).

My review:
Most Elvis Presley movies are mindless, colorful fun.

Others just end up being a bit mindless. FRANKIE AND JOHNNY (1966) may fall into that category. 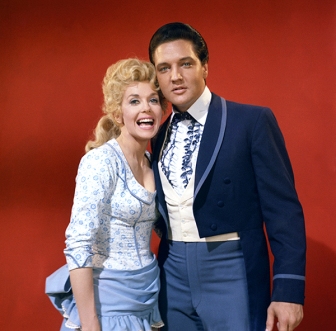 A little different than most Elvis movies, this is a period film set on a Mississippi River gambling boat. And Johnny (Presley) has a gambling problem that keeps him and his girlfriend Frankie (Donna) at odds. The two continue to be at odds when Nellie Bly (Kovack) arrives and brings Johnny gambling luck.

As far as plot and comedy go, FRANKIE AND JOHNNY are light, relatively pleasant fair. But man are the music and clothing all over the place.

For example, while we are set in the 1800s, during the “Petunia” number, Elvis is fully wearing a Yale college sweater tailor made for the 1920s. Some of the songs are quite period appropriate either.

Donna Douglas is lovely in the film, but is an odd pick as an Elvis leading lady since she doesn’t do her own singing.

However, if you enjoy the song “Frankie and Johnny,” this may be a good time for you, because they also perform the full number twice.

I hate to sound like I’m too hard on this film, it really was a good time. But it doesn’t quite have the ridiculous charm as some other Elvis films (See: Tickle Me).