Plot:
Eduardo Acuña (Menjou) wants his daughters to be married in order of age. While his two youngest daughters are eager to be wed, his second eldest Maria (Hayworth) is indifferent. To instill some romance in her life, Eduardo arranges a ruse of a secret admirer, who she mistakes to be New York dancer Robert Davis (Astaire).

Trivia:
• Second and last film pairing of Fred Astaire and Rita Hayworth. The other film was YOU’LL NEVER GET RICH (1941).
• Nan Wynn dubbed the singing voice of Rita Hayworth
• A version of the Argentinian film “Los martes orquídeas/On Tuesdays Orchids” (1941). A 1963 version of the story was released in Mexico with the title “Una joven de 16 años.”
• Working titles were “Carnival in Rio” and “The Gay Senorita.” 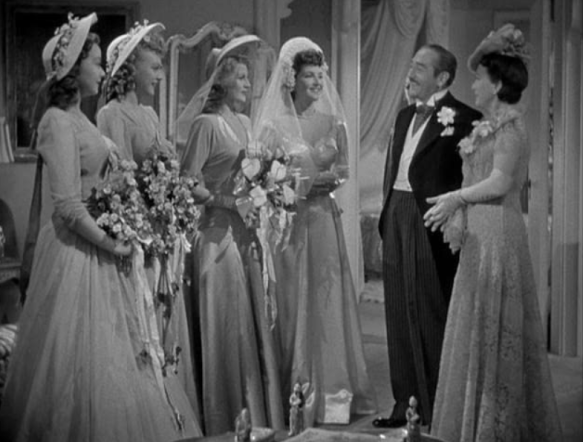 My review:
Need something uplifting on this Monday? Well YOU WERE NEVER LOVELIER (1942) is truly a glittering joy from start to finish.

With almost a “Taming of the Shrew” plotline, the film opens as the eldest daughter of Eduardo Acuña (Menjou) is getting married. His two younger daughter (Brooks, Mara) are sulking, because while they are ready to get hitched, they have to wait their turn. Eduardo wants his daughters to marry in order of age and next in line is Maria (Hayworth), who is known to be a bit icy. In fact, upon meeting her, New York dancer Robert Davis (Astaire) compares her to a refrigerator while talking to her dad (oops). To keep the peace in his family and to keep the wedding party moving, Eduardo contrives a plan of fabricating a secret admirer for Maria to instill some romance into her heart. It works, but the problem is, who will be the admirer? Enter back Robert.

Now this may sound sacrilegious to cinephiles, but after Eleanor Powell, Rita Hayworth is my favorite Fred Astaire dance partner. They have surprising chemistry and zest and seem to have a genuine good time as they dance. It’s a shame they only made two films together.

Astaire and Hayworth perform one of my all-time favorite dance numbers on screen: “The Shorty George.” It’s upbeat and Hayworth matches Astaire’s energy and perfection step for step (after all, she also was a professional dancer before entering the Hollywood scene).

I’ve mentioned this in another recent review, but I watched Astaire’s dance numbers closely in this film. The line “He made it look easy” is frequently thrown about. Does he? I disagree. While watching “The Shorty George” and “Los Hijos de Buda,” my first thought was, “This is incredibly athletic.” In fact, he’s doing steps that I see in my high-intensity interval training gym (box jumps, surrender squats). It’s incredible.

One “flaw,” if you will, is that we do have to wait 35 minutes into the film until anyone dances. But despite that, we are treated to great music prior performed by bandleader Xavier Cugat and His Orchestra. When I tell you I love Xavier Cugat … I danced and clapped when he was on screen. I’m a fan. And I’m always excited to see his singer, Lina Romay, perform in any film (though it appears she was dubbed during the anniversary party.)

While I thoroughly enjoyed this film, I will say I was dubious about one thing: Is the family supposed to be Hispanic? The family lives in Argentina and a remake of an Argentinian film, but thankfully no one is in brownface (Rita Hayworth, as we know is Hispanic). Though later, Menjou’s character mentions his parents were born in Brittany, France and then came to Argentina, so I’m not sure.

Anyhow, I had great fun watching this film. And if you need a palate cleanser from the world, give this a watch. Or look up “The Shorty George” online.