Plot:
Singer Judy Jones (Leslie) is left a fortune when her eccentric explorer uncle dies. But there’s a catch. Judy has to marry a man with an IQ over 150. She leaves her bandleader sweetheart Tommy Coles (Alda) and heads to college to find a husband. She catches the eye of Professor Bart Williams (Prince), her roommate Oliver S. Patch (Cook), with Tommy still in the running.

Trivia:
• After the release of this film, Joan Leslie sued Warner Bros. to be released from her contract. She finally was released in 1949 after several years of a legal battle, according to her 2015 obituary.
• Early announcements from The Hollywood Reporter said Faye Emerson or Jane Wyman would star in this film. The role ended up going to Joan Leslie.
• Dennis Morgan was initially announced as the lead, but the role went to Robert Alda.
• Second film of Robert Alda. This film was shot before Alda’s first released film “Rhapsody in Blue,” but “Rhapsody” was released first to establish him as a star.
• Filmed from Dec. 1943 to May 1944, but held for released until 1946. It had to be re-edited to remove references to the war, according to Busby Berkeley’s biographer.
• Joan Leslie’s singing voice was dubbed by Louanne Hogan
• Last film of Margaret Early
• Working title was “Judy Adjudicates”
• Based on the short story “Judy Adjudicates” by Philip Wylie, which published in the April 1943 issue of Red Book Magazine. 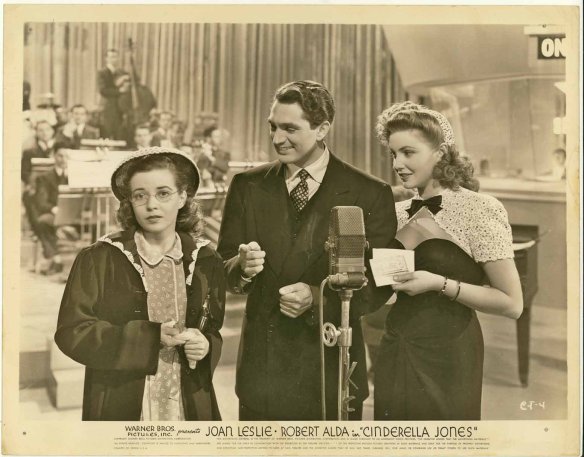 My review:
CINDERELLA JONES (1946) is a light-hearted, though silly, Warner Bros. musical. But behind-the-scenes was not so lighthearted. After the film’s release, the film’s star Joan Leslie sued her home studio Warner Bros. to be released from her contract. She was tired of the roles she was cast in – like in this film.

In CINDERELLA JONES, Judy Jones (Leslie) plays a big band singer on the radio and is dating the bandleader, Tommy Coles (Alda). While Judy is singing on the radio, a nationwide search for Judy Jones is taking place after an eccentric millionaire explorer dies, leaving Jones millions. It just so happens to be our Judy Jones. But there’s a catch to Judy inheriting the money – she has to marry a man with a high IQ. The lawyers in charge of the estate try to enroll Judy in college, but the problem is, she’s not very bright. Just the same, she makes her way into an all male college and catches the idea of a smart student, a professor, and Tommy who is still in love with her.

I both enjoy and get annoyed by CINDERELLA JONES (1946). It has an excellent cast, some funny moments and great songs – I especially liked the song “If You’re Waitin,’ Im Waitin’ Too.” But Joan Leslie’s character not being smart is frustrating – and I can understand Leslie’s annoyance. Some of it is just downright ridiculous. For example, Judy gets a job in a diner, and while she’s trying to make a cheese sandwich, she slices a bar of soap instead (cue bubbles coming out of William Prince’s mouth). I’m sitting there thinking, “Now how do you confuse cheese and soap?”

Some of these got a chuckle out of me.

I was also confused why William Prince’s character of Professor Bart Williams was so ready to kick Judy Jones out of the all male school. Wouldn’t they have had a faculty meeting to let everyone know that they’d be receiving one female student? But I know I’m thinking too logically into a musical comedy.

But there is something confusing about the background of this film. CINDERELLA JONES (1946) was filmed in 1943 and held for three years before it’s release. So much of it had to be re-edited to eliminate wartime references. But this makes the ending a bit confusing. Trying to leave and get married to the person Judy selects (I won’t ruin it and tell you who), the group can’t proceed because of a convoy of jeeps and tanks. My assumption of course was it was servicemen returning home, but now I know it was a wartime tie-in. But in general, the ending is strange. The group climbs on a tank to travel (wouldn’t a Jeep have been faster?). They are married while riding on the tank, and then a wedding cake is passed up. Where did this cake come from? Did they have to eat the cake right then? I digress.

Bosley Crowther of the New York Times compared this film to a 1930s college musical, and I’d say that was pretty accurate. It has the same humor, fun music, and lack of studying of musical films of that era.

But despite my criticisms above and Joan Leslie’s unhappiness with this film … I somehow can’t dislike CINDERELLA JONES. From Joan Leslie to Robert Alda to Edward Everette Horton and S. Z. “Cuddles” Sakall, it has such an excellent cast. The songs brought me joy, and I even liked the weirdo ending. What can I say? I like ridiculous musical fluff.