In 2022, I didn’t watch as many due to several life changes. I only watched a little over 400 feature-length films, but still saw several great ones. Below are my favorite new-to-me films of 2022, in order of when I watched them:

Cat Ballou (1965)
Directed by Elliot Silverstein
I watched this in memory of Dwayne Hickman (and now we’ve lost Michael Callan), and had a great time. I wish we had more Hickman and Callan buddy films! Bittersweet to see Nat King Cole in this, since he died shortly after.

The Private War of Major Benson (1955)
Directed by Jerry Hopper
I wanted to watch this film for several years and was happy to finally watch it. An interesting different role for Charlton Heston and lots of cute kids. I loved seeing young Sal Mineo in an early role.

La main du diable/Carnival of Sinners (1943)
Directed by Maurice Tourneur
This may actually be my all-time favorite film of 2022. I watched this in January 2022 and it has stuck with me ever since. The visuals and storytelling are simply stunning. With an intriguing plot that keeps you wondering “How will our main character get out of this predicament?” My jaw was quite literally dropped throughout most of the film. Highly recommend seeking this one out. Few films have captivated me like this one.

This Happy Breed (1944)
Directed by David Lean
A visually stunning film with bright Technicolor that interestingly contrasts with the poignant story. Like real life families, you see the happiest and most crushing moments of their life. There are some very sad moments in this film, and the end left me worrying for one of the main characters, as if she was a real person. It’s overall so stunning, and I love John Mills.

Yama no oto/Sound of the Mountain (1954)
Directed by Mikio Naruse
A beautiful and sad film about how you can do everything to a relationship, but it may not matter. In this case, it’s about a husband and wife.
Naruse also shows how separated the husband and wife are by showing the wife with her father-in-law more than she is with her spouse, showing you can love someone’s family more than you may love them. Really crushing but lovely.

Obsession (1976)
Directed by Brian De Palma
Featuring composer Bernard Herrmann’s last score, this film caught me off guard. I wasn’t sure if I’d even like it, but the end unexpectedly left me in tears. I loved the cinematography that gave the feel of steamy, humid New Orleans heat. I part suspected the end twist and was shocked I was correct. I also love Cliff Robertson. As someone born and raised in the south, the only downside was John Lithgow’s exaggerated (and bad) southern accent.

The Last of Sheila (1973)
Directed by Herbert Ross
Probably my second favorite film of the year, and the only one on this list that had a rewatch. This is an excellent all-star “whodunit” cast. The Last of Sheila is such a fun film to watch and has excellent dialogue throughout. You keep guessing and laughing throughout.

Un carnet de bal/Dancing Card (1937)
Directed by Julien Duvivier
I would love to have the gall to be a woman in her 30s, revisiting all the men who loved me when I was 16 and say, “Do you remember me?” without saying my name or giving any context. I loved the vignettes of this story and seeing what happened to each lover. Also visually stunning. Probably my third favorite film of the year. The film LYDIA was later loosely based on this story.

The River (1951)
Directed by Jean Renoir
Visually stunning in Technicolor, this is a very quiet, methodical coming-of-age story. It had some very sad moments where you thought, “This isn’t really going to happen, right?” and then it does. The film is equally heartwarming and heartbreaking.

Lady Godiva Rides Again (1951)
Directed by Frank Launder
I had the best time watching this movie. This was a fun, humorous look at the world of beauty contests and the rise and fall of a beauty queen. I loved Dennis Price playing a self-absorbed movie star, and the small roles played by Alastair Sim, Googie Withers and Trevor Howard. Not the best film ever made, but lots of fun. Also, you can catch a quick glimpse of Joan Collins in this film.

Cash on Demand (1961)
Directed by Quentin Lawrence
A thrilling, holiday-themed heist film that keeps you wondering what will happen. Peter Cushing gives an excellent performance in this.

The Underworld Story (1950)
Directed by Cy Endfield
That Dan Duryea. Even when you’re supposed to like him (I think?), you still aren’t sure if you can trust him. Duryea gives an excellent performance as a slimy reporter who may or may not be on the level, but also may be the only person you can turn to in this film. Howard Da Silva may steal the show, though. Stunning cinematography by Stanley Cortez. The only downside in this film is the odd casting of Mary Anderson, but otherwise I loved the film.

7 Women (1965)
Directed by John Ford
Beautifully photographed, this film yields excellent performances from a largely female cast, including Anne Bancroft, Sue Lyon, Margaret Leighton, Flora Robson, Mildred Dunnock, Betty Field and Anna Lee. Eddie Albert gives a great performance, as a weak man who tries to be strong and ends up failing. The only downside of the film is the dubious casting of Mike Mazurki

Le notti di Cabiria/Nights of Cabiria (1957)
Directed by Federico Fellini
I can’t believe I saw “Sweet Charity” before seeing this. Needless to say, this film is worlds better than the American musical remake. This was a crushing film with some sweet and funny moments. I can’t believe it took me this long to see it.

The Dirty Dozen (1967)
Directed by Robert Aldrich
Remember that scene in “Sleepless in Seattle” where they pretend to cry about a scene in “The Dirty Dozen”? Well, I actually did cry during “The Dirty Dozen”— largely because of the Donald Sutherland character. I really enjoyed this non-conventional World War II film with an all-star cast. Shout out to Robert Ryan looking really cool in sunglasses.

Brainstorm (1965)
Directed by William Conrad
A thrilling film with lots of twists and turns, that really makes you start wondering about the lead character, played by Jeffrey Hunter. Dana Andrews plays a rare bad guy role, and Hunter is excellent. Also doesn’t hurt that Andrews and Hunter are both very handsome.

La bestia debe morir/The Beast Must Die (1952)
Directed by Román Viñoly Barreto
This is an excellent film noir thriller, that tells you right off what happens, but then uses flashback to show why it happened. While it is exciting, it also is mixed with heartbreak as we see the motive for the lead character seeking revenge.
I ended this year with seeing the French retelling of this story, and while it is similar, I think the Argentinian story is slightly better done. 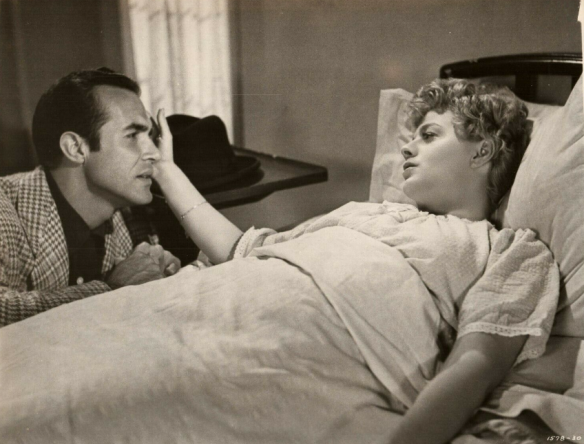 My Man and I (1952)
Directed by William A. Wellman
This film caught me off guard with how great it was. Ricardo Montalbán plays a naïve, unbelievably sweet guy, Shelley Winters plays a woman who is a mess, and Wendall Corey is just a bad dude. Claire Trevor, as Corey’s wife, gives Ricardo Montalbán a look that could melt butter. This was just a great story and I really didn’t expect to love it as much as I did.

The Reluctant Saint (1962)
Directed by Edward Dmytryk
Another film that I didn’t expect to love as much as I did. Maximilian Schell is fabulous and broke my heart the whole time — but in the best way. I usually think of Schell playing suave or forceful characters, but here he is a sweet, mild man. It’s a quiet, lovely film.

Hell to Eternity (1960)
Directed by Phil Karlson
This is somehow different than most World War II films made after the conflict ended. The film is based on the real life person, Guy Gabaldon, whose adoptive family was Japanese. Hell to Eternity is a thoughtful film. Vic Damone appears in a small role, playing a character that differs from his previous MGM youthful roles. It also features some surprisingly graphic battle scenes, which were unique for 1960 cinema.