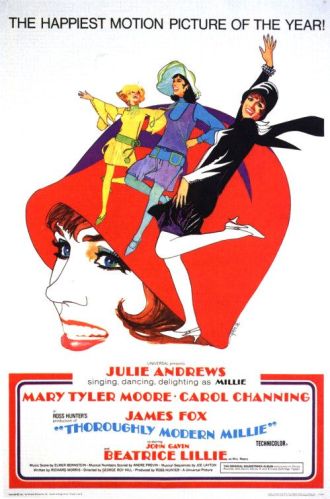 Plot:
Set in 1922 New York, Millie Dillmount (Andrews) strives to be a modern woman; dressing as a flapper, becoming a stenographer and marrying her boss. She becomes friends with sweet, naive Miss Dorothy (Moore), who is also new to New York. Millie encounters many adventures along the way, including eccentric millionairess Muzzy Van Hossmere (Channing). She also uncovers a white slavery ring, which kidnaps orphans.

Trivia:
-The 2002 Broadway musical “Thoroughly Modern Millie” was based on the 1967 film.
-Last film of actress Beatrice Lillie
-Director George Roy Hill’s first musical film
-Director George Roy Hill and producer Ross Hunter butt heads. Hill was removed from the film in post-production and the film ended up being 2 hours and 18 minutes. Some things that Hill would have edited out, like the Jewish wedding scene, were left in. Hunter also added an intermission and brought in Andre Previn, according to the book The Films of George Roy Hill by Andrew Horton
-Music by Elmer Bernstein

Highlights:
-The first few minutes of the film where Julie Andrews transforms into a flapper
-Mary Tyler Moore and Julie Andrews dancing in the elevator
-When two of the actors see each other for the first time and “Ah! Sweet Mystery of Life” starts playing
-Silent film jokes where Julie Andrews looks at the camera and a silent film card with her thoughts pop up
-When Julie Andrews meets her boss and the Hallelujah choir 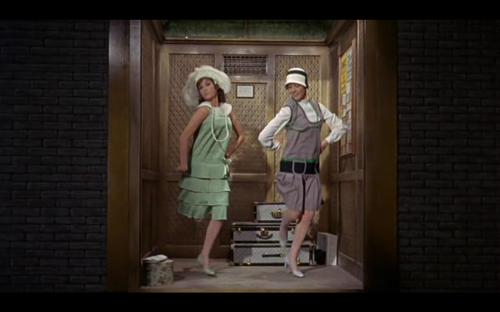 Mary Tyler Moore and Julie Andrews dancing in an elevator to make it go up and down.

My review:
By the time “Thoroughly Modern Millie” was released in 1967, musicals had mostly lost their popularity in Hollywood. But while “Millie” comes at the end of the bright musical era, it still serves up the same breezy good time like a 1951 MGM Technicolor.

While it’s hilarious and fun, director George Roy Hill said the film was meant to be a farce, according to The Films of George Roy Hill by Andrew Horton. He said he wanted to be a light film, “I wanted it to be a souffle.”

I knew of the play, “Thoroughly Modern Millie,” but was surprised to learn that it was based on the film, since generally films are inspired by the stage play. Admittedly, it’s an odd little plot with the “white slavery” aspect, but it is still extremely entertaining.

Julie Andrews plays Millie hilariously, trying to be a modern flapper. She uses words like “terrif” or “stenog” (for stenographer), rouges her knees, and marvels at the glamour and independence of free women, like Muzzy (Carol Channing).

Mary Tyler Moore plays Miss Dorothy, a demur, naive young woman. Moore looks lovely in her costumes and with long curls. Moore dances, but it is disappointing though, that Mary Tyler Moore doesn’t get to sing her own song. She actually has very few lines.

Filling out the supporting cast is Carol Channing, John Gavin, James Fox and Beatrice Lillie. Channing is entertaining to watch, as always, James Fox is a likable leading man and John Gavin is as handsome as ever. This is 1930s’ actress Beatrice Lillie’s last film. Lillie focused more on the stage than on film and she’s always a delight. It’s a real treat to see her here.

The songs are fun. There are only a few large dance numbers, like “The Tapioca,” which are very entertaining. A running joke throughout the film is that everyone has to tap dance to make the elevator go up and down. It’s fun to see what sort of dance steps they will do each time they get on the elevator. The highlight is Mary Tyler Moore and Julie Andrew’s dance on the elevator going up to the 12th floor.

This film runs at 2 hours and 18 minutes, which is rather long. Director George Roy Hill wanted to cut the Jewish wedding dance and song, which is an unnecessary scene. Regardless, this lengthy musical moves quickly and I never found myself bored or distracted.

This is one of Julie Andrews’ last major films of the 1960s, and I think it’s one you should definitely give a chance.