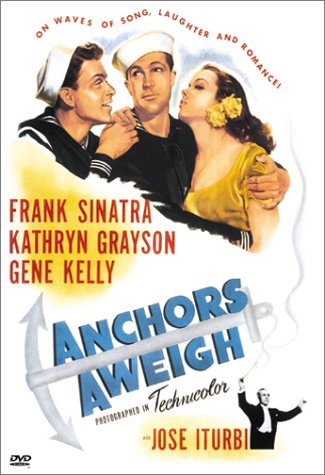 Plot:
Two sailors (Kelly, Sinatra) are on leave in Los Angeles when they meet a lost little boy, Donald (Stockwell). When they return Donald home, they meet his Aunt Susan (Grayson), who raises the boy and has dreams of becoming a singer. To impress her, the sailors mislead Aunt Susan and tell her they know famous pianist Jose Iturbi, so she can audition for him. Now they just have to find Jose Iturbi.

Trivia:
-Animators William Hanna and Joseph Barbera animated “The Worry Song” number with Jerry the Mouse dancing with Gene Kelly.
-Produced by Joe Pasternak
-Dances choreographed by Gene Kelly
-First of three films starring Frank Sinatra and Gene Kelly. The other two were On the Town (1949) and Take Me Out to the Ball Game (1949)
-Pamela Britton’s first film
-Dean Stockwell’s second film

Dean Stockwell in his second film 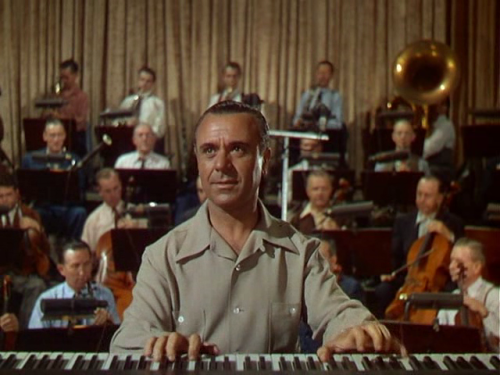 Famous pianist Jose Iturbi playing himself in in Anchors Aweigh (1945)

Notable Songs:
-“All of a Sudden My Heart Sings

” performed by Kathryn Grayson
-“I Begged Her

” performed by Kathryn Grayson
-“What Makes The Sunset?

My review:
Thirteen years ago, when I was seeking out any musical I could find, Anchors Aweigh (1945) was one of the first that I watched. I hadn’t seen it since then. I remembered very little, other than the fact that they were sailors looking for Jose Iturbi and Kathryn Grayson wearing a lovely, painted sunflower print dress.

I loved the bright yellow in Kathryn Grayson’s costume, designed by Irene

The film is beautifully shot by director George Sidney and cinematographers Charles P. Boyle and Robert H. Planck. The mix of cinematography and Technicolor is particularly complimentary to Kathryn Grayson who has some very lovely close-ups. Costume designer Irene took advantage of the Technicolor by clothing Grayson in bright yellows and greens.

The story itself isn’t anything new when it comes to plots: Sailors on leave who find love amidst music and dancing. But it is colorful and has the added bonus of being set in Hollywood and on the MGM film lot, one of those “movies about movies.” That’s because Kathryn Grayson’s character works as a film extra at MGM and the sailors run around the MGM studio lot trying to find Jose Iturbi. We also get to see the Hollywood Bowl, where Jose Iturbi and 20 children perform on the piano in a magnificent musical sequence. Gene Kelly has some impressive dance numbers; including the novelty number with Jerry the Mouse (Tom and Jerry would later appear in an MGM film in Dangerous When Wet). Frank Sinatra croons beautifully, though he looks a little uncertain about his dance steps, and is still in his “awe shucks” sweet phase of his film career.

Along with the major cast, pianist Jose Iturbi is wonderful. MGM brought in talent like Iturbi to bring class and culture to the studio. Born in Valencia, Spain, Iturbi was one of the top classical pianists of his day, and he was criticized by his contemporaries for going to Hollywood. However, I love Iturbi, not only for his musical ability but for his kind demeanor. As I mentioned in my Holiday in Mexico review, his characters are always lovable. I know not everyone has seen 500 musicals, but I was rather horrified after watching the film at the Nitrate Picture Show and hearing people butcher his name and wonder who he was. Iturbi isn’t a well-known name today, I’m aware, but I was confused that these folks didn’t understand that he was a famous individual after watching a movie with a plot that revolved around his whereabouts.

With that said, all of the mentioned above is filmed into a lengthy 2 and a half hour film. While it’s all enjoyable and easy on the eyes, this is fairly long for a mid-1940s Metro-Goldwyn-Mayer Technicolor musical with any of their lead stars. Yes, later on musicals like “Sound of Music” and “West Side Story” were at epic lengths, but not during the mid-1940s. Of the MGM musicals produced by Joe Pasternak or Arthur Freed, only a few were longer than two hours:
• Two Girls and a Sailor (1944) at 2 hours and 4 minutes
• Till the Clouds Roll By (1946) at 2 hours and 12 minutes
• Holiday in Mexico (1946) at 2 hours and 8 minutes

Till the Clouds Roll By is a musical biopic about Jerome Kern featuring more than 20 star-studded musical numbers to chronicle Kern’s long career, so that makes sense for it to be so long. Many other MGM musicals of the 1940s and early 1950s hit right at or just under 2 hours.

So while Anchors Aweigh is pleasant, I have to wonder “Why so long?” There are 18 musical numbers. Gene Kelly has three major solo dance numbers:
• The Worry Song with Jerry the Mouse
• The Mexican Hat dance number, featuring 7-year-old Sharon McManus dressed as a Mexican child
• “La cumparsita” dancing dream sequence that Kelly describes to show his love for Grayson

And along with those, we have two duet dance numbers with Frank Sinatra and Gene Kelly.

I’m no expert, but it makes me wonder why someone wasn’t a little more heavy handed with editing. The Mexican Hat dance number doesn’t help move the plot along, like the Sinatra and Kelly duets do, and neither does the “La cumparsita” dream sequence. Was it in Kelly’s contract that he had to have a certain number of solo dances in a film? (That’s a serious question, so if you know the answer, please share!)

Despite the length, this is an entertaining film and an interesting study to see Gene Kelly and Frank Sinatra early in their film careers. I’m just puzzled why a film of this nature is only 20 minutes shorter than Quo Vadis (1951).