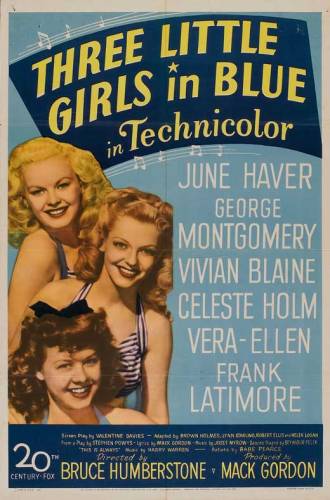 Plot:
Set in 1902, Pam (Haver), Liz (Blaine) and Myra (Ellen) are three sisters hoping to come into a large inheritance. When their windfall is less than expected, they decide to head to Atlantic City, NJ, to find rich husbands. Pam dresses as an elegant lady while Liz is her secretary and Myra the maid. 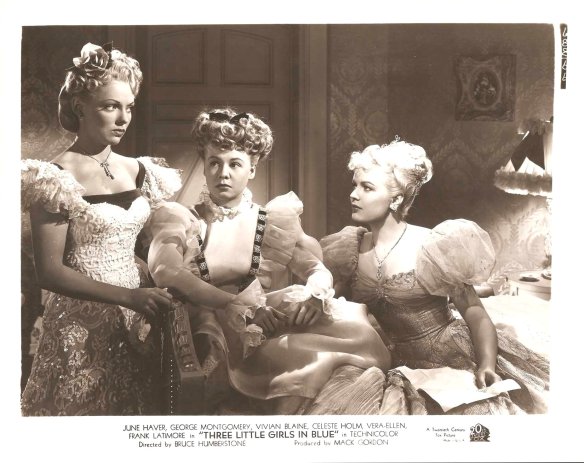 Notable Songs:
-“You Make Me Feel So Young” performed by Vera-Ellen and Charles Smith, dubbed by Carol Stewart and Del Porter
-“Somewhere in the Night” performed by Vivian Blaine

My review:
“Three Little Girls in Blue” was a movie that I always wanted to see judging by the female cast, colorful sounding title and 20th Century Fox musicals are generally delightful. And while it’s colorful, I was rather disappointed.

Knowing it was a remake of “Moon Over Miami” (1941), I had high expectations because I love the version with Betty Grable and Carole Landis so much. “Three Little Girls in Blue” is cute, but it falls flat. I can’t put my finger on why, but I found it a little annoying. It may be the music. This movie may only be 10 minutes longer than “Moon Over Miami” but it feels like it lasts an eternity.

Some of the songs are okay, but they also like to reprise the same songs two or three songs. We hear “On the Boardwalk in Atlantic City” twice in a span less than 10 minutes. Then Vera-Ellen performs “I Like Mike” at least three times. This is the most annoying song in the film because it’s awfully simplistic and has lyrics that rhyme a little bit too much.

“I Like Mike” is even featured in a long dream sequence with Vera-Ellen and Charles Smith and it’s pretty terrible. And while Charles Smith is sweet, I couldn’t help but wonder why they couldn’t get her a more dynamic leading man.

Celeste Holm’s role may be the highlight of the film, but she sings a song and it’s like she’s trying to be Ado Annie again (Holm originated the role on Broadway in 1943). I also always love to see Vivian Blaine in this film. She is a lovely and underrated actress.

Somehow this film lacks the formula that adds up to make a fantastic musical. Like someone calculated the equation wrong. It’s a happy and colorful little movie, but I felt it could be better.