Plot:
Set during World War II in North Carolina, the plot is a modern version of the opera “Carmen.” Joe (Belafonte) is in the Army and is about to be sent to flight school to become a pilot and officer. His girlfriend Cindy Lou (James) comes to see him off and wants to get married before he leaves. All of these plans are thwarted when Carmen Jones (Dandridge) sets her eyes on Joe. Carmen works in a parachute factory on base and gets in a fight with another worker and is sent to jail. Joe has to take her to jail, but she escapes, which cause Joe to be thrown in the brig and be demoted in rank. When he gets out of jail, Joe tells Dorothy he’s still going to flight school, but she is angry that Joe would think of leaving her. The two run away to Chicago, making Joe A.W.O.L. With Joe in hiding from the military police, Carmen starts to see boxer Huskey Miller (Adams).

Nominations and Awards:
Academy Awards:
• Dorothy Dandridge was nominated for Best Actress in a Leading Role

• Herschel Burke Gilbert was nominated for Best Music, Scoring of a Musical Picture

Trivia:
• Dorothy Dandridge became the first African-American woman nominated for an Academy Award for Best Actress in a Leading Role for her role in Carmen Jones.
•  Dorothy Dandridge’s singing was dubbed by Marilyn Horne and Harry Belafonte was dubbed by LeVern Hutcherson. Though they both could sing, the studio wanted operatic voices.
•  Leontyne Price was originally supposed to dub Dorothy Dandridge but became ill and couldn’t do the project.
• Famed choreographer Alvin Ailey is an uncredited dancer in the film.
•  Eartha Kitt was offered the role of Carmen Jones, but she turned it down since she would have to be dubbed with an operatic voice.
• Adapted from a 1943 Broadway musical with music and lyrics by Oscar Hammerstein II and ran 503 performances.
• Diahann Carroll’s first film role. She was dubbed by Bernice Peterson.
• Brock Peters’s first film role.
• Features Saul Bass’s first title design.

Brock Peters in his first film role with Dorothy Dandridge

My review:
For years I have yearned to see “Carmen Jones.” It’s one of the few well-known musicals I hadn’t seen, but some 20th Century Fox musicals can be elusive. When TCM aired it in 2017, I jumped at the chance to see it.

“Carmen Jones” is an updated take on the French opera “Carmen,” which was set in 1820 Spain. In the opera gypsy Carmen tempts a soldier of the guard, Jose, who eventually falls for her. Carmen ruins his military career and he is intoxicated by her love, but she ends up tossing him aside for another. Jose destroys Carmen.

This 1954 film, based on the 1943 Broadway musical of the same title, is the exact same story but updated to a World War II soldier, whose name was changed to Joe, and Carmen works in a parachute factory.

“Carmen Jones” was groundbreaking in 1954. An all-African American cast wasn’t anything new for films made from the 1920s to the 1950s, however, these seldom were films ever produced and released by major film studios like 20th Century Fox. And they were rarely nominated for Academy Awards.

“Carmen Jones” is shot in beautiful Technicolor and has a fantastic cast. Dorothy Dandridge and Harry Belafonte always have wonderful chemistry. We also see Diahann Carroll and Brock Peters in their first film roles, and then there is the fabulous Pearl Bailey. Olga James plays Cindy Lou, the spurned finance of Joe, and this was her only film. 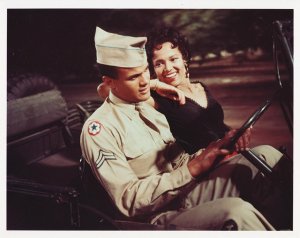 The music is also great, with Oscar Hammerstein’s words set to the music from French composer Georges Bizet’s opera, “Carmen.” However, because the music was still set in the operatic range, every singer but Pearl Bailey and Olga James were dubbed. Baily kept her usual low voice for more comedic songs, and Olga James had an operatic voice. While I understand the reasoning, this is still disappointing because Harry Belafonte, Dorothy Dandridge, and Diahann Carroll could all sing, just not in this high range.

But outside of the cast, music and Technicolor, I was disappointed and didn’t love “Carmen Jones.” A large part of this is because I simply don’t like the story of “Carmen.”

It’s a violent type of love story and it’s hard to believe that Carmen really loves Joe (or Jose). You get the feeling that she just wants him because he belongs to someone else, and once she has him, she has no use for him. Our lead is really the antagonist here. I don’t even feel sorry for Carmen at the end of the film (which I won’t spoil, but if you are familiar with the story Carmen, you know what happens).

The only character I feel sorry for is Cindy Lou. Cindy Lou really loved Joe and was willing to wait for him and help him when he was in trouble, unlike Carmen.

When it was released, the film got mostly good reviews, particularly from Variety, who said Preminger directed “with a deft touch, blending the comedy and tragedy easily and building his scenes to some suspenseful heights.”

However, activist James Baldwin was critical of the film, writing that it provided stereotypical ideas of what America thought of blacks and sex, according to The Cambridge Companion to James Baldwin.

“One is not watching either tenderness or love and one is certainly not watching the complex and consuming passion which leads to life or death, one is watching a timorous and vulgar representation of these things,” Baldwin wrote.

“Dorothy Dandridge … brought the black actress in films from behind the shadows and . . . emerged as Hollywood’s first authentic movie goddess of color,” wrote biographer and historian Donald Bogle about her role in Carmen Jones.

While “Carmen Jones” has some disappointing elements, Bogle’s assessment is the most important takeaway of this musical.