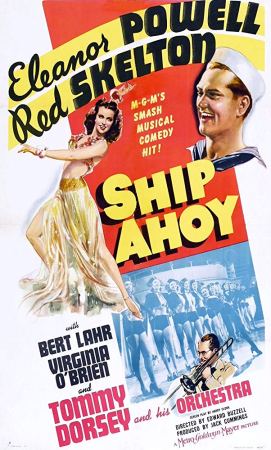 Plot:
Tommy Dorsey’s (himself) nightclub act, starring dancer Tallulah Winters (Powell), is sent to Puerto Rico to perform. Before boarding the cruise ship that night, Tallulah is approached by men who say they are government agents and ask her to take a powerful magnetic mine to South America. The agents end up being spies and got the idea to approach Tallulah from a comic book story written by Merton Kibble (Skelton), who is also on the cruise ship with his assistant, Skip Owens (Lahr). Skip wanted to take the trip because he is in love with performer Fran (O’Brien), while Merton falls for Tallulah. Allied agents are on the ship as well to try and intercept the mine before it gets in enemy hands.

Trivia:
• The film was originally titled called “I’ll Take Manila,” however, the Philippines fell to the Japanese in 1942, so the title was changed. Filming began before the United States entered into World War II, but was released in May 1942, after the United States had entered the war. The song “I’ll Take Tallulah” was also changed from “I’ll Take Manila.”
• Several leading men were originally announced including Robert Young, Desi Arnaz, and Tony Martin.
• Jack Cummings produced the film.
• Second screen appearance for Frank Sinatra, who is an uncredited singer with Tommy Dorsey’s band.
• The song “I Fell In Love With the Leader of the Band” was written for the film but not used. It was later used in The Great Morgan (1946). 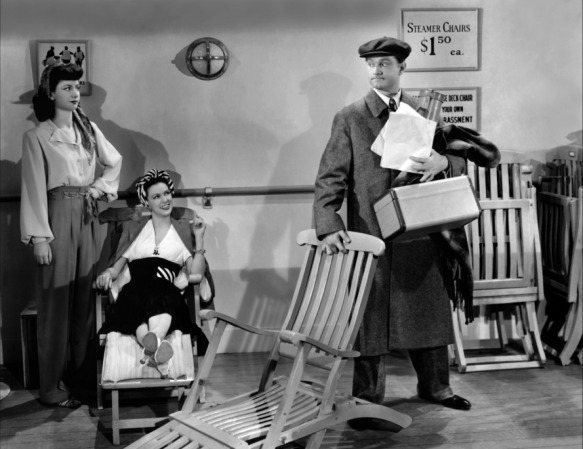 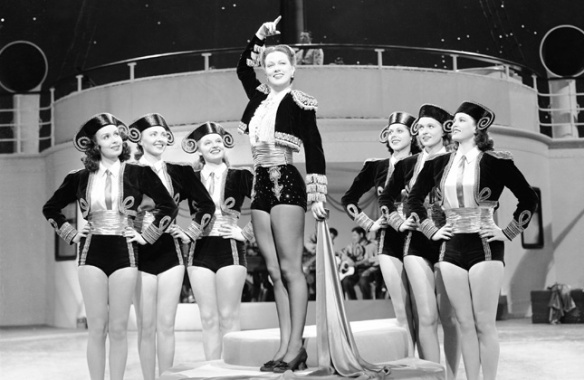 My review:
Whenever I think of “Ship Ahoy,” I only have happy thoughts.

Bandleader Tommy Dorsey’s orchestra and nightclub act, starring Tallulah Winters (played by Eleanor Powell), are sent to perform in Puerto Rico. The performance was arranged by enemy agents. Before they sail, Tallulah Winters is approached by men who present themselves as American officials and ask her to carry a magnetic mine. The agents thought that a group of performers would be unsuspecting, and got the idea from a comic book by hypochondriac writer, Merton Kibble (played by Red Skelton). To get closer to performer Fran Evans (O’Brien), Merton’s assistant Skip Owens (Lahr) arranges for he and Merton to ride on the same ship as the performing group. Tallulah and Merton fall in love, and neither one realizes that danger lies ahead when they arrive in Puerto Rico.

Because of the war-era, some changes had to be made. Going into production in November 1941, the United States had not yet entered World War II. The title was originally “I’ll Take Manilla” and the ship’s destination was Manilla. However, after Pearl Harbor and the Phillippeans fell to the Japanese in 1942, the destination was changed to Puerto Rico and the title was changed to “Ship Ahoy.”

Musicals in the 1940s were sometimes different than what today’s musical lovers are familiar with. Rather than Eleanor Powell and Red Skelton singing ballads to each other, much of the music comes from Tommy Dorsey and his Orchestra and Powell dances to their music.

Tommy Dorsey was one of the most popular jazz bands of the 1930s and 1940s. During this time, Frank Sinatra was Dorsey’s band singer, and his band also featured The Pied Pipers, which featured Jo Stafford during this time. Dorsey’s music in “Ship Ahoy” either sets a backdrop for romance or a tap dance numbers.

Skelton, Lahr, O’Brien and even Powell do some singing but in two main numbers – “I’ll Take Tallulah” and “Poor You.” “Poor You” is a multi-layered song – first it’s performed by Frank Sinatra, then Red Skelton sings it to Eleanor Powell, then Virginia O’Brien sings it in her deadpan manner to Bert Lahr, and then the song is tap danced by the duo Stump and Stumpy, or James Cross and Eddie Hartman.

Eleanor Powell’s Hollywood career began in 1935 and by 1942, she was nearing the end of her Hollywood career. Unfortunately for us, Powell only had 15 films to her credit. She retired to have a family. But though she only had two more films left under contract at MGM, Powell’s dance numbers knock it out of the park and are amazing to watch. Her numbers include:
• A dance number dressed as a hula dancer to the “Hawaiian War Chant” performed by Tommy Dorsey’s orchestra.
• “The Cape Dance” as she is dressed like a matador and swirling a cape around her.
• Dressed in her signature top hat and tails while she dances to “On Moonlight Bay” and then stops and taps out a Morse code message to an allied agent.
• And the true showstopper of the film: “I’ll Take Tallulah,” where Eleanor Powell drums with Buddy Rich, leaps on and off tables, tap dances off a diving board to then jump into a swimmers arm on a float. It’s a thrilling number to watch.

Outside of the musical, “Ship Ahoy” is also very funny with the humor of Red Skelton and Bert Lahr. I know some people avoid some musicals if they feature Red Skelton, but don’t miss this one. “Ship Ahoy” isn’t filled with prat falls or long mix-ups. Much of the humor comes from one-liners and funny situations. Skelton does a funny bit to get out of danger where he gives impersonations of George Raft, Edward G. Robinson and Chester Morris when they are shot in films. When Skelton came to MGM, he hoped to study comedy under Buster Keaton and get more serious with the craft. This was never fulfilled, and both Skelton and Keaton weren’t happy with their roles at MGM. However, I still enjoy his films and find his characters rather sweet.

I also have to mention the hairstyles and costuming in this film – the styles are stunning! The gowns designed by Robert Kalloch are absolutely beautiful. Eleanor Powell and Virginia O’Brien look gorgeous in this film.

“Ship Ahoy” (1942) isn’t often mentioned – and may be forgotten by most – when discussions start about MGM musicals. But it’s great fun and features some outstanding dance numbers performed by one of the screen’s top dancers. I urge you to add this to your watchlist.