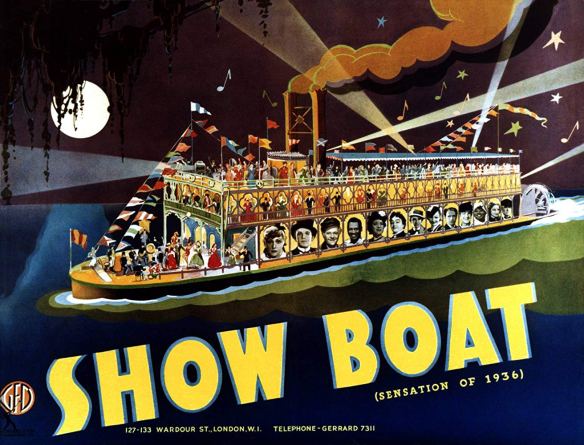 Plot:
Set in the 1880s, the Cotton Palace Show Boat travels from town to town to perform. When the show’s leading lady Julie LaVerne (Morgan) is told to leave because of a case of miscegenation, or an interracial relationship, Capt. Andy (Winninger) and his wife (Westley) have to find a new leading man and leading lady. Their daughter Magnolia (Dunne) takes the part and a gambler Gaylord Ravenal (Jones) is hired. The two fall in love and are married, against Magnolia’s parent’s wishes. The couple moves to Chicago and lives off of Gaylord’s gambling success, which is short-lived.

Trivia:
• One of three versions of “Show Boat” made. The other two were released in 1929 and 1951. The films were based on Edna Ferber’s book, “Show Boat,” and the 1927 Broadway musical with music by Oscar Hammerstein II and Jerome Kern.

• Along with Helen Morgan, the rest of the cast had performed in stage versions of “Show Boat.” Charles Winninger originated the role of Capt. Andy in the 1927 Broadway show.

• The song “Ah Still Suits Me” was written for the film and wasn’t in the original Broadway. musical. It was written to give Paul Robeson a larger role. The song was one of three new songs. The other two were: “Gallivantin’ Around” and “I Have the Room Above Her.”

• Songs were omitted from the film when it ran over 2 hours. These included Elly’s numbers – “Life Upon the Wicked Stage” and “I Might Fall Back On You.” Other songs cut included “C’mon Folks,” “Hey Feller,” “Till Good Luck Comes My Way,” “Why Do I Love You?,” “At the Fair” and “In Dahomony,” according to the book “Enchanted Evenings: The Broadway Musical from ‘Show Boat’ to Sondheim and Lloyd Webber” by Geoffrey Holden Block.

• While the 1929 film avoided the topic of “miscegenation” with Julie, the Hays Office granted permission for the plotline in this film. The plotline is also used in the 1951 office.

• The final production by Carl Laemmle, who had to leave Universal after this film was released due to financial issues.

• Irene Dunne had performed as Magnolia on the stage, which helped get her into films. She had wanted to act in the film since she got to Hollywood. In 1933, there were discussions that Dunne and Russ Columbo would star in the film and it would be directed by Frank Borzage, according to Irene Dunne: First Lady of Hollywood by Wes D. Gehring. 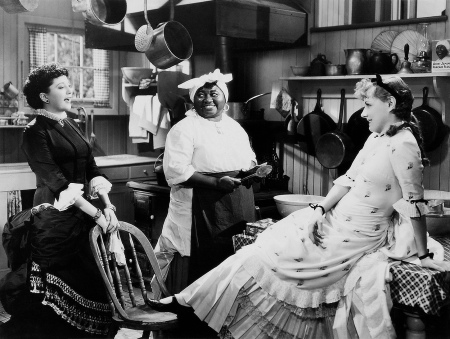 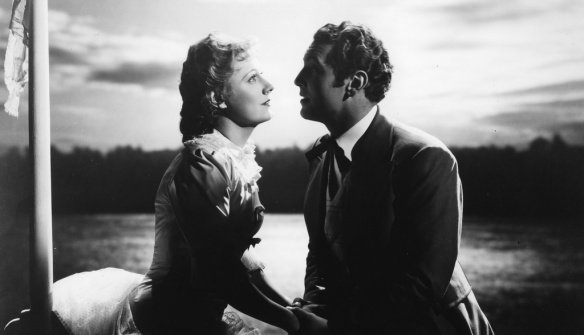 My review:
Edna Ferber’s 1926 novel “Show Boat” was adapted in several different way. When the story was brought to the Broadway stage in 1927, the plotline removed some of the more grim plotlines (Capt. Andy’s drowning, Parthy’s death, Magnolia and Gaylord never reuniting) and gave the story a musical flourish.

After success on the stage over the years, the film was adapted for film three times:
• In 1929 – mostly a silent film with some sound segments mixed in. This film incorporates some of the novel’s plot that are omitted from the play and other films (the death of Capt. Andy and Parthy). In this story, Magnolia also becomes a successful stage star, and the two are reunited at the end in their old age on the Show Boat in the 1920s.
• In 1936 – of the three films, this storyline seems to follow the 1927 Broadway musical the most. This includes Magnolia becoming a famous stage star and reuniting with Gaylord at the end at their daughter Kim’s Broadway debut in the 1920s. They do not return to the Show Boat at the end.
• In 1951 – While the first half of the film is similar to the 1929 and 1936 stories, after Magnolia performs at a New Year’s Eve Show, she goes home rather than going on to be a famous star. Magnolia returns to the Show Boat, has Kim, and Gaylord returns to her while the two are still young and it is still in the 1800s.

After watching the three films in a fairly small time frame (I watched the 1929 and 1936 versions on the same day), it’s safe to say that I feel the 1936 version is the best.

In this 1936 version, Capt. Andy’s Cotton Palace Show Boat (changed from Cotton Blossom due to copyright issues ) travels with his troupe of actors. When they arrive in one area, a jilted riverboat worker reports a case of an interracial marriage amongst two actors, Julie LaVerne and Steve Baker (Helen Morgan, Donald Cook). Julie and Steve have to leave the show boat and Capt. Andy (Charles Winninger) is left without lead actors. Despite the objections of his wife Parthy (Helen Westley), Andy casts his daughter Magnolia (Irene Dunne) and hires gambler Gaylord Ravenal (Allan Jones) as the leading man. The two fall in love – again against Parthy’s wishes – and marry and have a baby, Kim (for Kentucky, Illinois, Missouri). Magnolia and Gaylord leave the show boat to live the high life in Chicago, but Gaylord’s gambling success dries up and he leaves Magnolia. To make ends meet, Magnolia performs at a New Year’s Eve party and becomes a Broadway success. She retires in the 1920s when her daughter Kim is now taking the stage. Magnolia and Gaylord are reunited at the opening night.

The unique thing about this cast is that the majority actors – Irene Dunne, Charles Winninger, Paul Robeson, Hattie McDaniel, Helen Morgan, Allan Jones – performed in either the 1927 original stage production or in the 1929 and 1932 revivals, both on the east and west coast.

Since the time she came to Hollywood, Irene Dunne wanted to play the role of Magnolia on screen.

Irene Dunne and Allan Jones are wonderful as Magnolia and Gaylord. After the early part of her career, audiences didn’t get to hear Dunne’s beautiful operatic voice. In fact, if you don’t watch her 1930s films, you may not have known she can sing! Dunne exhibits a wide-eyed innocence that makes Magnolia’s love for Gaylord even more believable. Her youth and inexperience make you believe that she would follow Gaylord like a puppy, even as he drives them into debt. Jones isn’t as much of a rat as Gaylord, we don’t see him lash out at Magnolia or their arguments about hard times in this version. But when they are falling in love, you can see why Magnolia would fall for him. I find Dunne and Jones’s scenes on the showboat very romantic.

I think my favorite characters may be in the supporting cast – Charles Winninger and Helen Westley are perfect as fun-loving Capt. Andy and killjoy Parthy. To me, Westley is one of the major highlights of the film. Her eye-rolling, heavy sighs and side-eyes made me laugh.

In this version, we also have the characters of Queen and Joe, played by Hattie McDaniel and Paul Robeson. In the both the 1936 and 1951 films, Joe sings the showstopper “Ol’ Man River. But in the 1936 version, the character of Joe has more of a screen presence than performing the song. The character of Queenie isn’t in the other two films. McDaniel and Robeson are great in the film and fun to watch together. They are both main characters in the first half of the film. The song “Ah Still Suits Me” was written for McDaniel and Robeson in the film so that they would have a larger role. Robeson and director James Whale also became friends during the movie, according to the biography Paul Robeson: Film Pioneer by Scott Allen Nollen.

While McDaniel and Robeson are wonderful in the film, their characters do include negative stereotypes. For example, Queenie fusses at Joe for being lazy and not helping out. In one scene, Queenie is also called “eight ball,” which is a derogatory term.

It’s no secret that I prefer William Warfield’s version of “Ol’ Man River” in the 1951 film version. However, Robeson’s version is also great. My main beef is that the 1936 version of the song isn’t as slow and mournful. It is actually rather quick. However, Robeson’s deep baritone mixed with the camera rotating around Robeson as he begins to sing is still awe-inspiring. 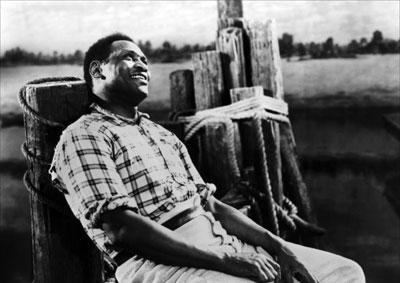 The character of Julie, a woman of mixed race, is played by caucasian actress Helen Morgan. While this may not be ideal, I do feel like Morgan’s real-life struggles help her play a tortured woman. Off-screen, Morgan struggled with alcoholism and was a tragic figure, not unlike Julie Laverne. Morgan originated the character on stage and this was her last screen role.

While I love this version of “Show Boat,” there is one scene that was cringey. The song “Gallivantin’ Around” was written specifically for the film, and Irene Dunne performs the song wearing blackface. It isn’t an interesting or good song, so I’m not sure why they felt it needed to be written into the film. I was already disappointed that the Elly and Frank duets of “Life Upon the Wicked Stage” and “I Might Fall Back On You” were omitted from the film, but and even more so when I realized “Gallivantin’ Around” was kept instead of those two songs.

One aspect that really makes this film is the direction of James Whale and the cinematography by John J. Mescall. “Show Boat” (1936) is so beautifully shot and has some interesting close-ups and zooms. Whale seemed like an odd choice, particularly because he was known for his horror films, but creates a beautiful atmosphere in this film.

While there are a some flaws, I just love this version of “Show Boat” (1936). It makes me laugh, as well as cry in some scenes. It’s visually beautiful and also well-made. Of the three films, I think this one is the best.