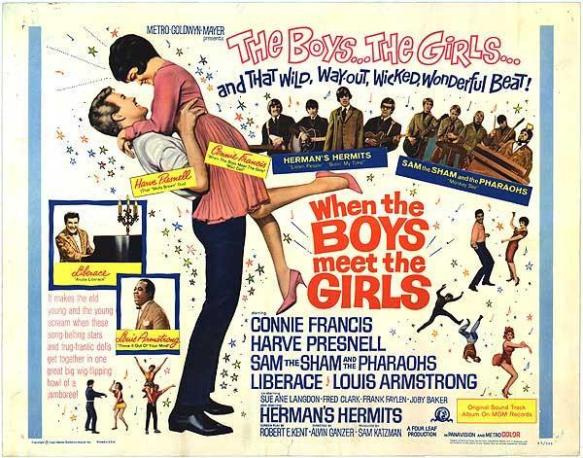 Plot:
When wealthy Danny Churchill (Presnell) runs into trouble at school with a showgirl (Langdon), his family sends him out west to a rural college for the trouble to blow over. He meets postmistress Ginger (Francis) who’s father (Faylen) is a gambler and has put them in debt; putting them in jeopardy of losing their ranch. Danny works to help Ginger and her father; turning their ranch into a successful hotel for divorcees, even with gamblers and showgirls trying to ruin their success.

Highlights:
• Appearance of The Herman’s Hermits

Connie Francis and Harve Presnell in “When the Boys Meet the Girls,” performing “I’ve Got Rhythm.”

Louis Armstrong in “When the Boys Meet the Girls”

My review:
This modernized version of “Girl Crazy” isn’t as good as the Judy Garland/Mickey Rooney version of this musical, but may match the Broadway version better than the two other film version.

In the 1930 original Broadway musical, a playboy is sent out west because of alcohol and booze. His job is to manage the family ranch, which he turns into a successful dude ranch resort with a popular singer there to entertain.

A 1932 Wheeler and Woolsey musical comedy film semi-follows the plot of going out west but also focuses on the comedy duo’s shtick.

The most popular film version is “Girl Crazy” (1943) starring Judy Garland and Mickey Rooney – changing the western location to attending a college.

This last film adaptation of “Girl Crazy” released in 1965 with Connie Francis and Harve Presnell under the title When The Boys Meet The Girls.” Presnell plays Danny Churchill, who is a college student (though perhaps a bit long in the tooth at 32 to be a co-ed). His former girlfriend and showgirl Tess Raliegh (Sue Ane Langdon) wants to sue Danny for breach of promise when he decides they shouldn’t be married, so his lawyer ships Danny out west to an Arizona college to hide out.

There, Danny meets Ginger Gray (Francis), the local postmistress, and Peter Noone with his Herman’s Hermits, who are students at the school. Ginger’s father Phin Gray (Faylen) has a gambling problem, which puts his family in debt. Not allowing Danny to use his millions to get the Grays out of debt, Danny transforms their former ranch into a resort.

“When the Boys Meet the Girls” keeps much of the original George and Ira Gershwin music with updated arrangements, and also adds contemporary rock music.

Popular bands of the time perform, such as Herman’s Hermits, Sam the Sham and the Pharaohs, and The Standalls. Popular musicians Louis Armstrong and Liberace also have specialty performances.

Peter Noone and the Herman’s Hermits do a bit of acting (as themselves) and have a speaking role, while the other bands and musicians only perform one song. This was the first narrative appearance of The Herman’s Hermits (they also appeared in Go Go Mania/Pop Gear this same year, which is a showcase of rock-n-roll acts). Following this film, the band was in two more M-G-M films: Hold On! (1966) and Mrs. Brown You’Ve Got A Lovely Daughter (1968).

While it may seem uncouth to say, the contemporary music performances are better than most of the Gershwin arrangments.

In “Girl Crazy,” the Gershwin performances are fabulous and well-performed. But in “When the Boys Meet the Girls,” they feel forced, overly updated/jazzy and the performances are only okay. “I’ve Got Rhythm” is an impressive number – and almost just as lengthy as Busby Berkeley’s staged number in “Girl Crazy” (1943) (though not as crazy). The dancers in “I’ve Got Rhythm” were, unfortunately, uncredited, which is a shame because they were a highlight.

I’ve always felt that Harve Presnell was a sort-of Howard Keel look alike, even sounding similar. I feel like if he had been able to enter musical films earlier, he would have had a more successful career. Instead, he unfortunately came in at the end of the musical genre era.

Throughout the film, Connie Francis didn’t seem happy and like she’d rather be doing anything else but making that film – perhaps that’s why this was her last movie.

Compared to “Girl Crazy” (1943), this isn’t a great movie. But if you don’t compare it to anything and allow it to stand on its own, it’s an alright musical with fun rock-in-roll acts and Peter Noone in a giant cowboy hat.