Plot:
A biographical film on trombone player and music arranger Glenn Miller (Stewart) and his courtship and marriage to wife Helen (Allyson). The film follows as he forms a band, looks for a unique sound, and his growing success until he joins the military and is lost in action in Dec. 1944 during World War II.

Trivia:
• James Stewart used one of Glenn Miller’s trombones in the film.
• The film is based on Don Haynes’s memories, who was the last person to speak to Glenn Miller before he boarded his flight. Haynes is portrayed by Charles Drake in the film, according to Glenn Miller’s biographer, Dennis M. Spragg.
• Chummy MacGregor and Don Haynes were a technical advisors of this film.
• Second film pairing of James Stewart and June Allyson.
• The song “Little Brown Jug” was released in 1939 instead of 1944, as depicted in the film.
• James Stewart’s fifth (of eight) film collaborations with director Anthony Mann.
• Working title was “Moonlight Serenade.” 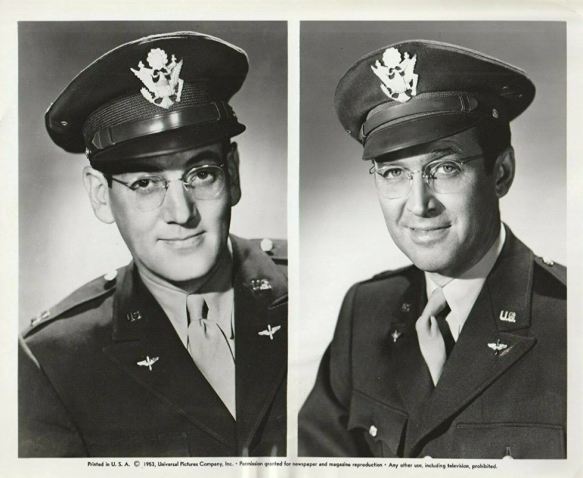 Highlights:
• Scene with Louis Armstrong with the color wheel.
• All of the Glenn Miller songs performed throughout the film.

Somehow the “The Glenn Miller Story” is different. While liberties were certainly taken with the bandleader’s life story, there are not dark, made up love interests. The whole story is told with sensitivity and warmth.

The film follows bandleader Glenn Miller, played by James Stewart, as he attempts to start his music career. While playing the trombone, he is also interested in arranging his own music and creating a unique sound that would set his music apart. He joins Ben Pollack’s band (with Pollack playing himself in the film) and finally has steady work. But after a few years, he separates to head to New York City to get ahead in his music. While in New York, he sends for his college sweetheart Helen Burger, played by June Allyson, so the two can get married. While they face financial hard times, Helen encourages Glenn to start his own band so that he can play his musical arrangements the way he wants to. After failing with his first band, he tries again and finally is a success. In the midst of his success in 1942, Miller leaves civilian life to serve in the Army during World War II, where he became the Army bandleader and performed for the Allies.

But in Dec. 1944, Miller boarded a single-engine plane and was never seen again. This film was made 10 years after his death (If you know anything about big band music, I’m not spoiling the plot for you here). The film closes with Miller’s friend Chummy (played by Harry Morgan) saying that Miller’s sound and music will live on. The popularity of this film and the love of Miller’s music today shows that they were right.

Released 10 years after his death, the 1954 biopic on Miller’s life was a huge success of that year. His death in 1944 was a blow to the country and was still on the minds of his fans. His disappearance and death are handled delicately and with no melodramatics.

There isn’t a reenactment of his plane getting lost or Helen having to be told of her husband’s disappearance. We see Miller’s character board a plane, and all the audience knew what that meant in 1954. Then we go to his wife on Christmas Day, waiting to hear the Glenn Miller band perform without her husband.

June Allyson and Jimmy Stewart in “The Glenn Miller Story”

While this is a lovely story, there admittedly were some liberties were taken with his life story.

“That was no more The Glenn Miller Story than ‘Jack and the Beanstalk,'” said friend and fellow bandleader Tommy Dorsey, according to director Anthony Mann’s biographer Jeanine Basinger. (Not that Tommy Dorsey had much room to talk from his own musical biopic released a few years earlier).

Some fictional elements for the sake of storytelling include:
– The phone number “PEnnsylvania 6-5000” that inspired the song was for the Hotel Pennsylvania, rather than Miller’s phone number that he tells his sweetheart.
– In the film, “Little Brown Jug” is Helen’s favorite song, and Miller hates it. Helen hears the song on the Christmas broadcast after Miller dies. In real life, Glenn Miller’s recording was released in 1939.
– Frances Langford appears in the film and performs “Chattanooga Choo Choo” with Miller’s band and The Modernaires. Langford didn’t perform with Miller’s Army Air Force Band.
– The film Miller is making in Hollywood is a fictional reenactment. The Archie Savage Dancers dance to “Tuxedo Junction” in “The Glenn Miller Story.” This is probably a nod to Dorothy Dandridge and the Nicholas Brothers dancing to “Chattanooga Choo Choo” in “Sun Valley Serenade” without gaining 20th Century Fox’s permission to use that film within this film.

However, while all these are taking liberty with real life, they aren’t a deal-breaker.

I love this film. The whole 100 minutes are filled with a dreamy warmth. Part of this is due to Miller’s music that plays throughout. The sweet story and clarinet-led music also make me feel a little weepy, knowing the outcome. I sort of want to cry throughout the film, even though I love it.

“Not since ‘Yankee Doodle Dandy,’ the film about George M. Cohan, have we seen as appealing and melodic a musical biography as this charmer, ‘The Glenn Miller Story,’ which grooved into the Capitol yesterday. And not since Jimmy Cagney’s spirited playing of Mr. Cohan have we seen as likable and respectable a portrait of a show-world personage as James Stewart’s genial performance in this picture’s title role. Add the considerable measure of June Allyson’s performance as the wife and you have the exceptional combination that gives magic warmth to the film.”

Mann’s biographer Jeanine Basinger agrees, calling it one of the best musical biographies ever made, and I agree.

Thinking of so many other film biographies, there are fabricated love interests, because either: 1. The real characters were still alive and would sue the studio 2. There were too many characters to profile, so they are rolled into one or two people. And sure, Stewart didn’t really look like Miller, but it still somehow works (Miller’s mother attended the premiere is was quoted as saying that her son was handsome). After all, James Cagney also looked nothing like George M. Cohan.

But the added bonus is that many of the characters in the Glenn Miller story are real. Clarinet player Willie Schwartz is mentioned, who was the musician that led Miller’s characteristic sound. Harry Morgan’s character of Chummy is John “Chummy” MacGregor, the piano player for Miller’s orchestra from 1936 to 1942. We also see real-life figures like drummers Gene Krupa and Cozy Cole, Louis Armstrong, and bandleader Ben Pollack.

My only question is, I wondered why Tex Beneke wasn’t in this film. Beneke was Miller’s saxophone player and the lead vocals for several of Miller’s songs, including “Chattanooga Choo Choo” and “I’ve Got a Gal in Kalamazoo.” I haven’t found any reference to why Beneke isn’t mentioned or in the film. Perhaps there was a conflict? If you know why, comment below (I’m a huge fan and am curious).

Outside of the Miller music, this film is also an early composing credit for the great Henry Mancini.

It’s worth repeating that I adore this film. If you enjoy big band music or are a fan of Glenn Miller, you probably will too. But have some tissues on standby.