Plot:
A biographical film on trombone player and music arranger Glenn Miller (Stewart) and his courtship and marriage to wife Helen (Allyson). The film follows as he forms a band, looks for a unique sound, and his growing success until he joins the military and is lost in action in Dec. 1944 during World War II.

END_OF_DOCUMENT_TOKEN_TO_BE_REPLACED

Plot:
Famed trumpet player Harry James (himself) is drafted at the start of World War II. His fellow nightclub performer, Lon Prentice (Foran), wants to enlist in the Army but keeps getting declined as 4F for flat feet. Lon finally is accepted into the Army, but at basic training, Lon doesn’t feel he needs to participate in military training.

END_OF_DOCUMENT_TOKEN_TO_BE_REPLACED

Plot:
Jive singer Judy Alvin (Tilton) is having a hard time finding a job. She gets a job as a telephone operator for jukeboxes (people pick up a phone and give their song request). Judy cuts a record and it gets confused with acquaintance (and terrible singer) Phoebe Forbes (Brodel) who rides to success on Judy’s voice.

Trivia:
-One of the few films where Martha Tilton acts and isn’t just a specialty singer
-Actress Betty Brodel who is in the film is Joan Leslie’s sister

My review:
As a lover of big band music, Martha Tilton is one of my favorite girl singers of the 1940s. “Swing Hostess” is a small-time B-film but it’s also one of the few opportunities you can see her acting in a film, other than popping in as a specialty singer.

The storyline for “Swing Hostess” isn’t remarkable or new, but it’s fun and cute. It’s also set in my favorite time period: World War II era 1940s. So it’s filled with big band music. While the war isn’t mentioned very much, one of the main characters is drafted into the Army and Martha Tilton sings that he “Got An Invitation” (to be drafted).

Also the most intriguing part is the jukebox technology. Before watching this film, I didn’t realize that patrons were able to pick up a phone and talk to a hostess on the other end who would put a record on. That is Martha Tilton’s job in this film.

Martha Tilton isn’t an amazing actress, but what she doesn’t have in acting, she makes up for in voice. Also Iris Adrian is there for comedic value.

If you love 1940s films and big band music, check out this film. Bonus points: It’s only 76 minutes!

Today we celebrate the birth of America. I thought about what makes me think “Now that’s America” when I watch old movies. Here are a few things that I thought of:

John Wayne: What other actor is so widely known and associated with America? His roles are usually a cowboy or a soldier. My favorite role of his is from “They Were Expendable” which is probably one of the best World War 2 movies along with “Battleground.”
Many of my friends and others have criticized John Wayne as always playing the same role, or playing himself. I personally don’t see the issue with this when so many of today’s actors like Katherine Hegel or Jennifer Aniston play the same role over and over again. The only difference is John Wayne played meaningful, strong and manly roles while those actresses are always dizzy, confused dames. To me, John All-America actor. He even played football in college, what could be more American than that? 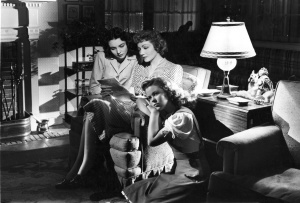 Claudette Colbert, Jennifer Jones and Shirley Temple in my favorite movie, “Since You Went Away” (1944)

The 1940s: Another thing that embodies America is the 1940s war era. I suppose I am a bit romantic about patriotism because I crave a patriotism that no longer exists. During World War II, men were willing to fight for the country and those on the home front who couldn’t fight did all they could to help out. Victory Gardens were grown, cooking grease was saved and sent to the military, women sacrificed their silk stockings and painted their legs. People gave up daily luxuries that people today would refuse to give up.

LIFE magazine: LIFE magazine used to be the top publication. I can’t think of a magazine published today that can compare to LIFE. It showed the world the truth about war, the current fashions and let them in on celebrity lives. Even more so, it was a magazine that was started to revolve around photo journalism. It has some of the best photos and photographers like Robert Capa who showed us what war really was.

Other things:
-Pin-Up girls: Betty Grable, Esther Williams or Rita Hayworth. They all had sex appeal, but that same attainable, girl next door quality.
-Big Band music: No one can play a trumpet better than Harry James and Tommy Dorsey always seemed like one of the most likeable fellows. Glenn Miller even died while he was flying to a USO show during World War II.-Irving Berlin: Jerome Kern once said, “Irving Berlin has no place in American music, he is American music.” The man wrote “White Christmas”, “Cheek to Cheek” and “Putin’ on the Ritz”, who else can you say that about?