Plot:
When her school closes, Ann Martin (Lynn) is determined to join the WRNS, the Women’s Royal Naval Service of Great Britain. Before she can join, her uncle thinks she would be better suited running a nursery for the children of women needed for wartime factory work. While locating a house for the nursery, Ann meets John Drover (Murray-Hill), a mysterious man in a nearby cottage. The two fall in love while Ann’s brothers (Jewel and Warriss) determine why he’s not in uniform.

END_OF_DOCUMENT_TOKEN_TO_BE_REPLACED

Plot:
Fred Atwell (Astaire) is one of the Flying Tiger pilots during World War II and has been named a hero for all of his successful missions. During his leave back home, he is taken on a personal appearance tour. Tired of the strict schedule, he gets off the train at a stop and decides he’s going to have fun. He meets photographer Joan Manion (Leslie), who he falls for but she believes it just a drifter.

END_OF_DOCUMENT_TOKEN_TO_BE_REPLACED

Plot:
Jive singer Judy Alvin (Tilton) is having a hard time finding a job. She gets a job as a telephone operator for jukeboxes (people pick up a phone and give their song request). Judy cuts a record and it gets confused with acquaintance (and terrible singer) Phoebe Forbes (Brodel) who rides to success on Judy’s voice.

Trivia:
-One of the few films where Martha Tilton acts and isn’t just a specialty singer
-Actress Betty Brodel who is in the film is Joan Leslie’s sister

My review:
As a lover of big band music, Martha Tilton is one of my favorite girl singers of the 1940s. “Swing Hostess” is a small-time B-film but it’s also one of the few opportunities you can see her acting in a film, other than popping in as a specialty singer.

The storyline for “Swing Hostess” isn’t remarkable or new, but it’s fun and cute. It’s also set in my favorite time period: World War II era 1940s. So it’s filled with big band music. While the war isn’t mentioned very much, one of the main characters is drafted into the Army and Martha Tilton sings that he “Got An Invitation” (to be drafted).

Also the most intriguing part is the jukebox technology. Before watching this film, I didn’t realize that patrons were able to pick up a phone and talk to a hostess on the other end who would put a record on. That is Martha Tilton’s job in this film.

Martha Tilton isn’t an amazing actress, but what she doesn’t have in acting, she makes up for in voice. Also Iris Adrian is there for comedic value.

If you love 1940s films and big band music, check out this film. Bonus points: It’s only 76 minutes!

END_OF_DOCUMENT_TOKEN_TO_BE_REPLACED 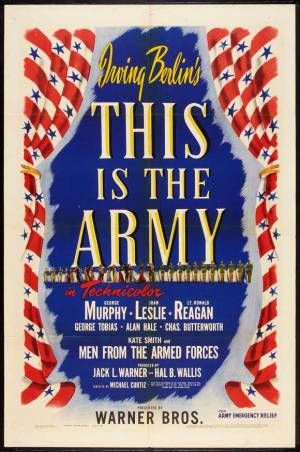 The movie starts in 1917, when dancer Jerry Jones (Murphy) is drafted to fight in World War I. Before leaving, he marries his sweetheart Ethel (DeCamp).
But before the soldiers are shipped overseas, Jones stages an all-soldier Broadway show called “Yip Yip Yaphank.” While fighting in France, Jones hurts his leg and will no longer be able to dance.
When he returns to the states, he becomes a producer, and his buddy Eddie Dibble (Butterworth) -who was the bugler in the Army-opens a music store.
Over 20 years pass, and we see Jones’s son Johnny (Reagan) preparing to fight in World War II. Dibble’s daughter Eileen (Leslie) wants to get married before Johnny goes overseas, but he doesn’t want to potentially leave her as a young widow.
Now that Johnny is in the military, he is given the order to create a military show just like his dad. This time, it’s called “This is the Army.”
Once the plot is set up, the remainder of the movie is the the actual show “This is the Army” including musical performances, a magic act, a comedian and acrobats.

Trivia:
-The movie came from two Irving Berlin shows “Yip Yip Yaphank” and “This is the Army,” according to a disclaimer from Warner Brothers at the beginning of the film. The cast of both the stage and play version of “This is the Army” included soldiers who were performers in civilian life.
-The original Broadway play of “This is the Army” came by request of the United States War Department. Irving Berlin received a letter in 1942 asking him to do a revival of the World War I show, “Yip Yip Yaphank,” to help raise funds for the Army Emergency Relief. Berlin had already considered doing this, but knew he had to change the title, according to The Complete Lyrics of Irving Berlin  edited by Robert Kimball, Linda Emmet
-Warner Brother’s first three strip Technicolor film.
-Warner Brother’s top film of 1943, earning $9,555,586.44. The money made was donated to the Army Emergency Relief.
-This is actress Dolores Costello’s last film.

Notable Songs:
-God Bless America sung by Kate Smith
-What Does He Look Like sung by Frances Langford
-This is the Army Mr. Jones sung by the chorus
-I’m Getting Tired So I Can Sleep sung by James Burrell
-Ladies of the Chorus sung by Alan Hale (dressed as a woman)
-I Left My Heart at the Stagedoor Canteen sung by Earl Oxford
-That’s What the Well Dressed Men in Harlem Wear sung by James Cross, featuring boxer Joe Louis
-Oh, How I Hate to Get Up in the Morning sung by Irving Berlin

Highlights:
-A disclaimer before the film noted that the Army does not condone black face, which is used in a number during the film, but says it is a part of history.
-Irving Berlin singing “Oh, How I Hate to Get Up in the Morning” in a rare film appearance.
-Real color footage of the attack of Pearl Harbor during the montage of the bombing.
-Alan Hale dressed as a woman in the musical number “Ladies in the Chorus.”
-Warner Brother stars such as Joan Leslie, Ronald Reagan, George Murphy, Alan Hale, Charles Butterworth and Una Merkel in color!
-One of the character actors does fairly convincing speech impersonations of Herbert Marshall, Charles Boyer, Lynn Fontanne and Alfred Lunt. 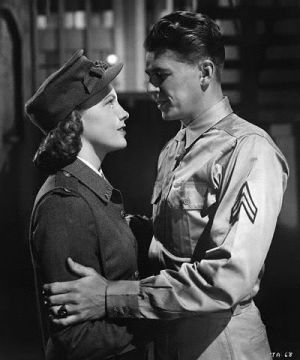 The romance between Joan Leslie and Ronald Reagan took up probably 20 minutes of this film.

But while the other four listed musicals still hold attention and are fun, somehow “This is the Army” falls flat. The initial plot set up seems promising, but after the first 45 minutes, the movie turns into musical number after number after number with little plot interlude. That is where “This is the Army” differs from similar films. For example, in “Hollywood Canteen,” you have the romance of Joan Leslie and Robert Hutton between the different performances.

The lack of plot interlude is honestly disappointing, because actress Joan Leslie and some of the other leads are maybe on screen for 20 to 30 minutes in the two hour and five minute film.

On a more technical side, the DVD print that came in the 2008 “Homefront Collection” isn’t very good. In close shots, the color is gorgeous. But in a few scenes, it looks over exposed and washed out.

When I first saw this movie in 2009, I really enjoyed it. Now I found I was rather bored. I appreciate any patriotic World War II film, because it gives you a feel of what audiences wanted during the war. After all, this was Warner Brother’s top film of 1943, so apparently audiences enjoyed it at the time. Or maybe they were watching the movie so their money would be donated to the Army Emergency Relief.

I feel that the movie could have been better structured. Actors like Una Merkel, Dolores Costello, George Murphy and Charles Butterworth are wasted in this film because they barely have any screen tirme. Less songs and more plot in this slightly over two hour film would have been more enjoyable.