END_OF_DOCUMENT_TOKEN_TO_BE_REPLACED

The three very different Paramount Pictures actresses are brought together to star in one of my favorite 1940s films, “So Proudly We Hail” (1943).

The film follows a group of U.S. Army nurses- Claudette Colbert (as Lt. Janet Davidson) and Paulette Goddard (as Lt. Joan O’Doul)- who leave for Hawaii for their tour of duty. Shortly after they leave, Pearl Harbor is attacked and the United States is brought into World War II. The military ship picks up nurses and wounded from Pearl Harbor, one a troubled nurse Lt. Olivia D’Arcy, played by Veronica Lake. The nurses are then sent to the Philippines, first assisting soldiers in Bataan and then evacuating to Corregidor.

From a dramatization of Doolittle’s Raid in “Thirty Seconds Over Tokyo” to “Mrs. Miniver” showing life on the British home front and the Battle of Dunkirk, Hollywood made several films that depicted what was going on overseas during World War II.

While I enjoy most 1940s era World War II films, I love “So Proudly We Hail” because of its focus on military nurses.

Colbert is the real star of the film; the rock of the group of nurses, leading them to aid injured soldiers. Goddard and Lake flank her as secondary female leads: Goddard the flirty, glamor girl and Lake the troubled, quiet nurse.

Their differences in real life as actresses as well as the differences in their characters illustrate the wide range of people who were brought in to serve together during war time.

“The events in this movie were still very much on the minds of Americans when this film came out,” said Turner Classic Movies prime time host Robert Osborne in the DVD introduction. “Events in the movie had happened for real recently and news reports were still coming out.”

Movies like this are made to make viewers feel proud and patriotic of their country, but what I like about “So Proudly We Haill” is that I feel it’s fairly realistic.

Nurses with 104 degree temperatures from malaria are still caring for men while others are craving tomatoes and milk, items that can’t be found on the military front.

“What is a heroine,” One nurse asks, tired of all the attention on their voyage home.

“I don’t know. Anyone who is still alive,” another says.

While Claudette Colbert is consistently good in all of her films, “So Proudly We Hail” gave Veronica Lake and Paulette Goddard the chance to show off their acting chops.

One scene that sticks out is when Goddard and Colbert find out why Lake acts cold towards the other nurses:

She opens up to Colbert about why she is angry and is there to “kill Japs”:

“Today is Christmas, isn’t it? The time for cheer and good fellowship and for peace. Well, today’s my wedding day. He and I were to be married today in St. Louis. And why weren’t we? Because he’s dead. He died that first morning. They killed him. I saw him. He was running across the field to his plane and they killed him. Sixty bullets – sixty! By the time I got to him he was dead. His face was gone – I couldn’t see him anymore. Just blood – blood all over.”

For Goddard, the scene that sticks out is when she tearfully says goodbye to soldiers in a military hospital before being shipped back to the United States.

When the film starts, Goddard is flirty, saying she has two fiancés, because she can’t say no to an engagement. But throughout the film, as she sees the horrors of war, she wants to help in every way she can, attending to soldiers and never sleeping. At the end she gives the wounded soldiers small gifts of hers and her old love letters for some laughs.

Other scenes that stick out to me:

• When Pearl Harbor is attacked, the nurses and military personnel are on a boat several miles out watch the bombing. There are screams of horror and disbelief, though they watch the attacks.

• Lt. O’Doul (Goddard) wearing a lacy black nightgown throughout the film. The night gown first enters as a dress for the Christmas party. Later she wears it every night to keep her moral up.

• The son of Nurse Capt. “Ma” McGregor has his legs amputated and soon after dies. Her son never knew his father, because he died in battle, and now Ma’s grandson won’t know his father either.

“My son like his father died for what he knew what is right. And if we don’t make it right, then they will all rise up and destroy us,” she says.

•The scene when the nurses are left behind during an evacuation. The nurses are the last to ship out during evacuation as the Japanese move closer. Lt. O’Doul forgets her nightgown, holding their truck up and the male drivers are shot. As Lt. Davidson (Colbert) searches for the truck keys to drive them out the nurses panic. 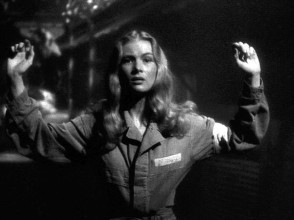 “I was in Nanking. I saw what they did. They fight over the women like dogs,” said Lt. Peterson (Ann Doran) panicking.

-During this scene is when Lt. D’Arcy dies. She takes a grenade, pulls out the pin, puts it in her uniform and walks towards the Japanese pretending to surrender. She dies to protect her peers and to “kill Japs” which is what she originally said she wanted to do. The scene is horrifying and shocking for a 1940s film.

• When the Japanese bomb the military hospital, sweet nurse Lt. Rosemary Larson, (Barbara Britton) is killed when the roof of the hospital collapses.

• When Lt. Davidson and Lt. Summers (George Reeves) get married and are given gifts of bread and peanut butter. Another sign of how much items we take for granted were valued.

The movie also has two romances: A playful and joking one between Paulette Goddard and a marine played by Sonny Tufts, and a more serious, passionate one with Claudette Colbert and a soldier played by George Reeves. However, I don’t feel the relationship takes away from the true purpose of the film.

As mentioned before, the three actresses were very different, and it has been rumored that they didn’t get along.

“All three were popular actresses and not accustomed to sharing close-ups,” Osborne said.

In Veronica Lake’s autobiography, she said she got along with her co-stars while it was Colbert and Goddard who locked horn. However, actor George Reeves disagreed.

“George Reeves said Veronica was the difficult one,” Osborne said. “Claudette was the moral builder for the whole cast, and if there was a problem it was because all three were so different. Reeves said it takes three to make a quarrel and Colbert wasn’t into that. She was too busy doing her work.”