Carroll Baker will be attending a screening of “Baby Doll” (1956) this weekend, Saturday, Aug. 17, in Winston-Salem, NC through the RiverRun Retro film series. Following the film, Ms. Baker will be interviewed by film historian Foster Hirsch. Learn more about how to get tickets.

Today, Ms. Baker is retired from films and is now an author. Her fourth book, Who Killed Big Al?, was published this May.

I interviewed Ms. Baker on the phone about her career and upcoming appearance:

Comet Over Hollywood:
Have you ever done anything with River Run Film before?

Carroll Baker:
My daughter has. Um, she, she does the short films with her students. She’s an acting teacher. She went to the festival (River Run International Film Festival) last year, and I think she’ll go again this year. Then Rob came to New York. And then he came up with this incredible thing of doing, uh, and evening with just me. They do wonderful stuff. So the screening will be of “Baby Doll” and then Foster Hirsch, a film historian, will interview me, and we will talk about my new book, “Who Killed Big Al?”

Comet Over Hollywood:
I had some questions about your career that I was going to ask. So we’ll start kind of at the beginning of it all. What made you get into acting? What interested you about the craft? 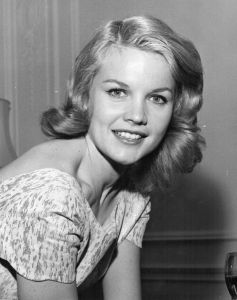 Actress Carroll Baker in the 1950s

Carroll Baker:
Well, you know, this is a long story. My mother and father had divorced, and I was living with my father in Pennsylvania. We didn’t have very much money. And when I graduated from high school, I was working in a factory. All my girlfriends had gone to university. The boy I was in love with went to university. And, and I said to myself, “I’m just not going to be stuck in this small town working in a factory.”

Because of my mother, I had taken dancing lessons. So when I was off work, I would go to our attic, which had a wooden floor. I used to tap, tap, tap and follow Ann Miller’s routines. So then my mother said, “Well, why don’t you come for a while and stay in Florida with me?” Well, that was terrific, because in Florida they have every conceivable club, like the Lions Club. And I got my first engagement there dancing. I earned $20. I kept getting dancing engagements and went to beauty contests.

We went to Daytona Beach and there was an International Convention of Magicians. There was this one magician, named Burling Hull and he called himself the Great Volta. So He was retired, and he didn’t have an assistant. He said, “I’m inventing acts now, and I’ve invented an act that’s just for a woman. It’s the magic jewel act.” So I went to stay with he and his wife and practiced really hard. And learned how to do this magic act. And this ties me into North Carolina! I was booked on Kemp Time, which was one of the last vestiges of vaudeville. It was a western show. Everybody famous you could think of was in it, like Elvis Presley. Virginia Mayo did her act with Pansy the Horse.