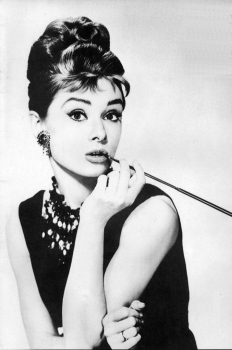 You may see this image on a daily basis if you go to college.

On a college campus you can’t miss the familiar outline of Holly Golightly from Breakfast at Tiffany’s (1961) with her cigarette holder while wearing a long black gown on the back of a sorority T-shirt. And of course under that photo will be Chanel’s quote “A girl should be two things: classy and fabulous.” (Though that is completely ironic, because Givenchy dressed Hepburn in most of her films).

If you don’t believe me, scroll through this blog that describes itself as a “celebration of Greek Life.” There are at least 4 posts about both Audrey Hepburn and Coco Chanel.

Sororities have taken the stylish, gamine star and are using her as their unofficial spokes person for the pay-for-your-friends groups.

She is on their t-shirts, event fliers, posters in their dorm rooms, coffee cups, keychains and Facebooks. Miss Hepburn helps announce fall and spring recruitment, formals and bake sales they have to raise money for their charities. If Audrey Hepburn was a business, it would be one of the wealthiest companies in the United States.

Once in my photography class, I even heard a boy ask who Audrey Hepburn was and my friend Dominic Beamer responded, “You know, she’s that lady who is on the back of all of the sorority t-shirts.”

But why pick on Audrey Hepburn? At the start of her career, she was described as having enormous eyebrows, rat chewed bangs and horse teeth. Does that sound glamorous or sexy?

I think a large part is the Givenchy outfits in “Breakfast at Tiffany’s.”  Who can forget the black dress she wears in front of Tiffany’s, the pink party dress she wears when Fred dies or even her brown trench coat?  However, Givenchy also designed the clothes for “Sabrina“, “Charade” and “How to Steal a Million.” Why don’t we see an outline of Audrey in that crazy helmet hat from “How to Steal a Million” or the dress she wows the Lamarees with at the exclusive dinner party in “Sabrina.”

Audrey Hepburn was one of my first favorite actresses when my movie love began. My love with her started with “Sabrina” and then Funny Face.”  I eventually made my way around to “Breakfast At Tiffany’s.”

When I first saw it in the 8th grade I had no clue what was going on: Why is she getting arrested? Why did he give her $50 to go to the powder room? What is Patricia Neal’s deal?  Now that I’m older, I understand the drug and sexual references; “Breakfast At Tiffany’s” is covering some pretty serious stuff.  I often wonder if these girls who say it’s their favorite movie watch it for the glamour of Givenchy’s clothes and George Preppard’s good looks or if they have even seen it at all.  Are they looking at the deeper meaning that Truman Capote wrote about in his novel: a woman toying with the idea of bisexuality?  Audrey Hepburn even felt like she was miscast in the role.

An example of Audrey Hepburn on a T-shirt.

Audrey Hepburn was glamorous in the movies, but like most actresses, didn’t have a fabulous personal life.
•She hid in a cellar from the Nazi’s during World War 2. She and her mother lived in occupied Holland and were forced to eat tullip bulbs and grass. This is what lead to her eating disorder later on in life.
• She wanted to be a ballerina but was told that she was too tall.
• Audrey had a difficult time getting pregnant. She was pregnant at the start of the movie “The Unforgiven” but was thrown from the horse and suffered a miscarriage-along with a broken back.
• Audrey had two failed marriages: One with actor Mel Ferrer and another with Andrea Dotti who cheated on her.
• While filming “My Fair Lady,” Hepburn worked very hard learning the songs and desperately wanted to sing. In the end she was dubbed my Marnie Nixon. Hepburn later said she wouldn’t have agreed to the film had she known this.
• She was constantly self conscious about her flat chest, thinness and looks. She was very uncomfortable and unhappy during the movie “Funny Face” and wanted Mel Ferrer with her during all times.
• Robert Wolders lived with her at the end of her life….(I feel like he was someone who just swooned the older actresses and wanted their money).

However, Audrey Hepburn also was a wonderful woman who had a love for gardens and spent the end of her life  doing work with UNICEF. She was also a great actress who won an Oscar for “Roman Holiday.” It’s a shame to me that she has her image defamed on brainless, comic sans-fonted sorority t-shirts.