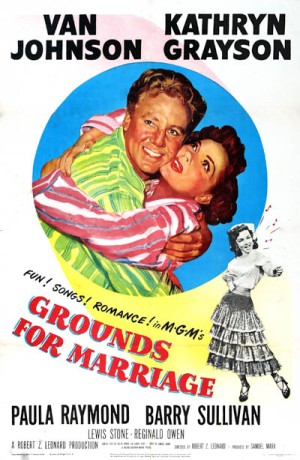 Plot:
When Ina Massine (Grayson) returns to New York from Europe, she tries to win back her husband Lincoln “Linc” Bartlett (Johnson) after being divorced for three years. Linc is now engaged to Agnes Young (Raymond). On the day of her New York stage comeback singing “La Boheme,” Ina has a sore throat and then suddenly looses her voice. Doctors determine that the loss of voice is psychological from the shock of Linc’s engagement. Linc then tries to throw Ina into a new romance and appoints his brother Chris (Sullivan) to do the task.

Trivia:
-The movie originally was supposed to star Robert Walker and June Allyson. After Allyson was no longer in the film, it was going to star Walker and Kathryn Grayson, according to a Hedda Hopper brief from July 28, 1949. Van Johnson replaced Walker.
-“That’s the only picture I really loved making,” Grayson said in a Jan. 7, 1951 interview with Hedda Hopper. “I’ve been in films since 1940, but I’ll confess that I have never been particularly interested in a film career until recently.”
-During the “Carmen” dream sequence, Van Johnson is dubbed by Gilbert Russell for the character Don Jose and Stephen Kemalyan for the character Escamillo. 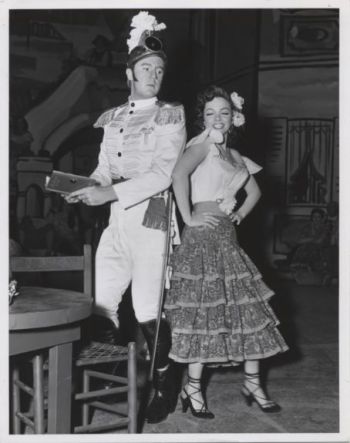 Van Johnson and Kathryn Grayson dressed for the “Carmen” dream sequence in “Grounds for Marriage.”

Highlights:
-Van Johnson playing the bird sound in the doctor’s symphony
-The “Carmen” dream sequence, which acts out the film’s predicament. Johnson is hilariously dubbed in an operatic voice. Johnson said in a Feb. 13, 1951 article in the Times Daily that he had never seen the opera.
-Van Johnson gives a speech on the common cold to the women’s club and says it’s mainly psychological or due to stress. Air is blowing on the back of Johnson’s neck and by the end of the speech, he has developed a bad cold.

My Review:
This is not your usual Kathryn Grayson musical, chock full with operatic performances in Technicolor. In fact, Grayson probably has four or five numbers because most of the movie she can’t speak or sing due to loss of voice.
Van Johnson, as always, is also a lot of fun; excelling in comedic moments and is likable (but I’m biased because he was my first film love).
I always love to see Paula Raymond in films, and I hated that she didn’t have more screen time in “Grounds for Marriage.” (Spoiler) I also would have almost preferred for Raymond to end up with Van Johnson.
It certainly isn’t the best film Grayson or Johnson made, but it is a fun and cute movie. Some of the gags can be tiring, but “Grounds for Marriage” is a nice piece of escapism.