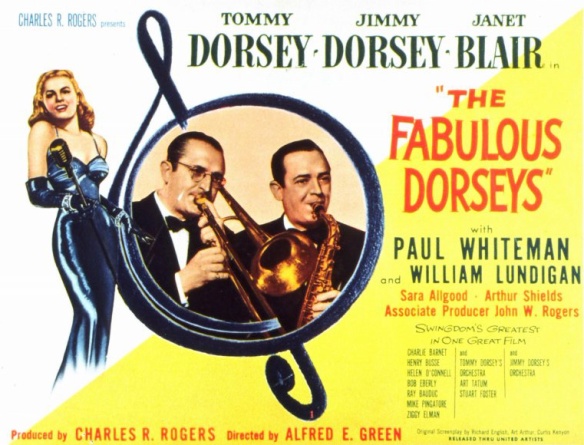 Plot:
Starting in their youth in 1916, the film is a fictionalized biopic of bandleader brothers Jimmy and Tommy Dorsey who reached the height of their fame in the 1940s. The film depicts the brother’s differences and tumultuous relationship that lead to them splitting into their own separate bands.

Trivia:
-The film is based off of a Saturday Evening Post article called “The Battling Brothers Dorsey.”
-When the film was released in February 1947, their hometown in Pennsylvania designated the week “Dorsey Week.”
-The film failed critically and commercially and the brothers made no profit from the film, according to “Tommy Dorsey: Livin’ in a Great Big Way : a Biography” by Peter J. Levinson. 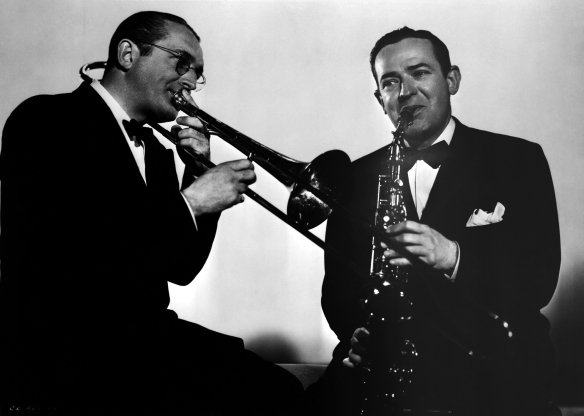 Highlights:
-Seeing the Dorsey brothers on screen together.

My Review:
This is one of the few biographical films I can think of that actually stars the people who it is about. While this film is mostly fictional, the fact that the film stars its subject matters is very interesting, and it’s notable to see the Dorsey brothers together on film.
Trombone playing Tommy Dorsey and saxophone playing Jimmy Dorsey were two of the top big band leaders of the 1930s and 1940s, though Tommy was probably more famous than his brother. Both brothers were featured as musicians in several films of the 1940s and 1950s, but Tommy popped up more often, particularly in MGM films such as “Ship Ahoy,” “DuBarry was a Lady” and “Thrill of Romance” and the Goldwyn film “A Song is Born” with Danny Kaye.
The film shows the Dorsey brothers growing up in humble upbringings and their father encouraging their musicianship, it seems that much is at least true. The film also shows the two brothers performing together in a band known as “the Dorsey Brothers” but frequently fighting, that much is also true.
The Dorsey brothers were extremely competitive, and though Tommy was more successful, he was jealous of his brother, according to the book “Tommy Dorsey: Livin’ in a Great Big Way : a Biography” by Peter J. Levinson.
The brothers formed their band in 1930 and split in 1935. Before their split, they tried to stay together by one brother directing the band for the first half of the performance and then switching, according to Levinson’s book. The two eventually formed again in 1953 to perform together, but both died only a few years later: Tommy in 1956 at age 51 and Jimmy in 1957 at age 53. Their mother (who is played by Sara Algood in the film), outlived her two musician sons, passing away in 1968 at the age of 93.
As actors, Tommy is much more natural and human on screen while Jimmy Dorsey seems a bit more like a 1930s Warner Brothers character actor.
The film almost concentrates too much on the two brothers fighting, which gets tedious. After the first two or three fights in the film, I think the audience gets the idea that they didn’t get along.
Janet Blair is in the film as a childhood friend who performed as their girl singer in the film and falls in love with a piano player. I’m sure that much is fictional and was added into the film so there was a romance somewhere in the plot line.
While the actual plotline is questionable, this film gives a brief glimpse into the lives of two brothers who had a longstanding feud and also gives you the opportunity to hear excellent music and musical cameos of some of the most popular performers of that time. 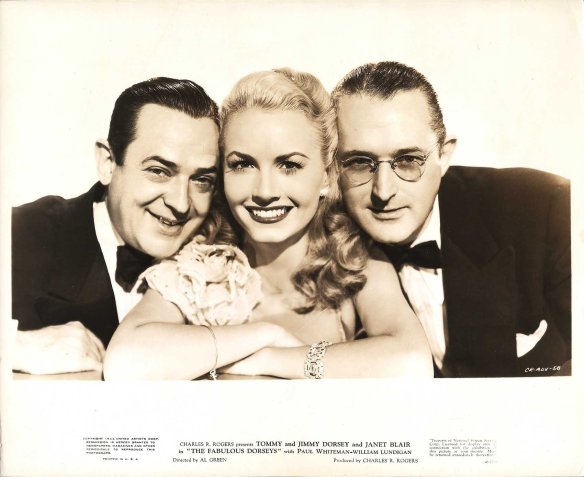