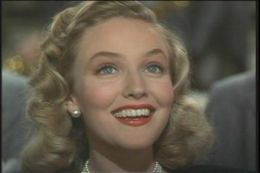 Texas breeds cows, politicians and beautiful women.  One of these women was “Gorgeous” Georgia Carroll.

Ginny Simms was Kyser’s orginal band singer. The two were romantically involved and Simms left shortly after they broke up. Carroll met future husband and band leader Kay Kyser during World War II, according to the Daily Tar Heel. Carroll enrolled in Kyser’s “Musical Kollege of Knowledge” as the band’s singer and the two later were married.

Carroll and Simms were the opposite end of the piano when it came down to talent and personality. They both brought different things to Kyser’s band.

Georgia Carroll was very beautiful and had an equally golden voice. Carroll was demure, classy and soft. She seems like she was probably polite, quiet and sweet in person. On the other hand, Ginny Simms had a beautiful voice, but she also had a lot of soul. She too was pretty but had a bit harsher appearance than Carroll. I don’t know much about Simms personally, but I do know that she went through men alot, and I’ve also wondered if she was working her way up the ladder. She dated Kyser, sang for him, then left when they broke up. She also had one of her big solo breaks in film after dating Louis B. Mayer. However, dating aside, Simms did have a long and successful marriage until she died in 1994.

Kyser left the big band scene in the early 1950s, and moved his family to Chapel Hill, North Carolina.  Carroll remained in Chapel Hill from 1951 until her death this year at the age of 91.

Kyser was a 1928 UNC graduate- he wrote their fight song and was student body president- and that may be one reason I like him so much. Kyser has a lot of southern charm and humor and went back home to his roots when he retired. Carroll also was a UNC grad, taking 20 years to graduate when she just took one class a semester.  Carroll also helped start a historical preservation society in Chapel Hill in 1972 to save buildings that might be torn down.

On a bit more of a personal note, my grandparents lived in Chapel Hill, North Carolina from 1956 to 1961, while my grandfather was teaching and getting his PhD at UNC.  Though Kyser was a Christian Scientist, Georgia Carroll and the children went to the same Lutheran church my grandparents went to. My mom was in the same Sunday school class as some of the Kyser children, though she was too young to remember, and my grandmother saw Georgia in church frequently. She said she was just as beautiful in person as she was on the screen.

Grandmama even said she would see Kay Kyser in the grocery store on occasion, but she was too nervous to say hello. Such a shame.

Rest in peace, Georgia Carroll. She is so beautiful and is yet another classic singer or star who has left us. Not only do I love her for her talent, but I have always been so intrigued that she lived so nearby.

I really had planned on calling her for an interview for my blog sometime, but never could get up the nerve.