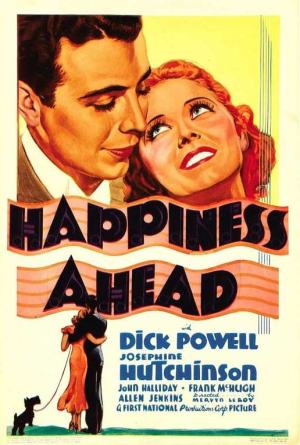 This week’s musical:
“Happiness Ahead” –Musical #485

New York socialite Joan Bradford (Hutchinson) is unhappy with life in society. Her mother has picked out a wealthy husband for her to marry, and Joan does not love him.  On New Year’s Eve, Joan ditches her parents’ high class party and goes downtown. Joan meets window washer Bob Lane (Powell) and starts posing as a working class girl so he won’t find out she comes from money. She rents an apartment on the other side of town to keep up the guise. 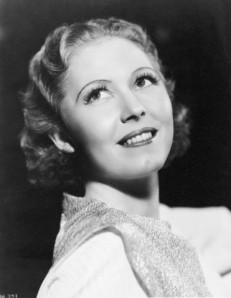 My Review:
“All in all, Mr. LeRoy seems to have made a lot out of a little,” Andre Sennwald reviewed in a 1934 New York Times film review.
Sennwald hits the nail on the head. “Happiness Ahead” has a very simple and overused plot–an unhappy heiress finds love with a working class man. However, this is a very charming film.
Like most Dick Powell musicals, Powell sings the same song about three times. With some films, this could be tiring. But somehow with Powell’s melted-butter-like-voice it is forgivable.
Though this isn’t a dramatically demanding role for Josephine Hutchinson, she is very likable in her first major film. She may not be as glamorous as Powell’s other leading ladies such as Gloria Stuart or Joan Blondell, or as cute as Ruby Keeler, but she is very pleasant to see on screen. Though Hutchinson went on to act in films through the 1970s, it is curious why her time at Warner Brothers in the 1930s and 1940s wasn’t more stellar.
As with most 1930s Warner Brothers films, the secondary actors were the biggest treat. Frank McHugh plays Powell’s window washing coworker, and Allen Jenkins and Ruth Donnelly play Hutchinson’s servants. John Halliday as Hutchinson’s understanding father is also hilarious.
This film may not be on the same level as other Powell musicals of the 1930s but it is very charming and pleasant. If you are looking to be cheered up, this film offers “Happiness Ahead.” 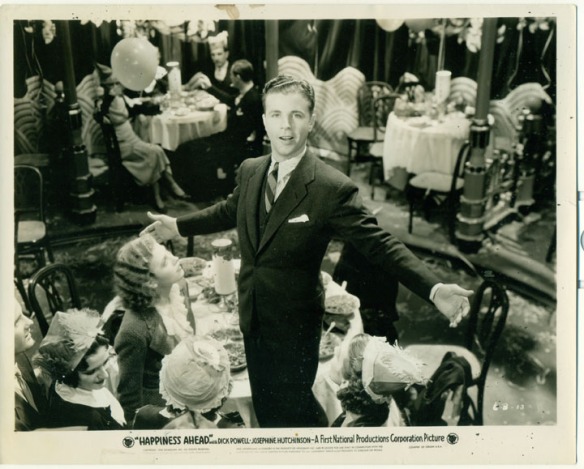 Dick Powell in a publicity still for “Happiness Ahead.”