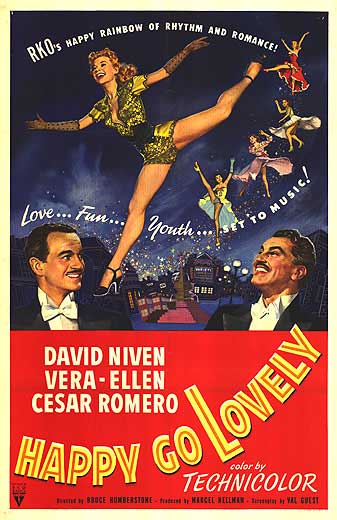 Plot:
Director John Frost (Romero) is putting on a show in Edenborough, Scotland, but doesn’t have a funds to do it. When a rumor starts that chorus dancer Janet Jones (Vera-Ellen) is engaged to greeting card millionaire B.G. Bruno (Niven), John makes Janet the lead with hopes that Bruno will put money in the show.

Trivia:
-This film was made in Great Britain in attempt to compete with American films and incorporate American pop culture in British films. They did so by starring and directing American talent, according to Popular Music On Screen: From Hollywood Musical to Music Video by John Mundy
-British musical films were struggling. Casting American talent in their films was one strategy to solve this, according to The International Film Musical edited by Corey Creekmur, Linda Mokdad
-When screened in the United States, a gag involving a kilt had to be cut, according to Banned in the U.S.A.: British Films in the United States and their Censorship, 1933-1966 by Anthony Slide.
-Vera-Ellen’s singing was dubbed by Eve Boswell, a singer popular in Great  Britain in the 1950s. 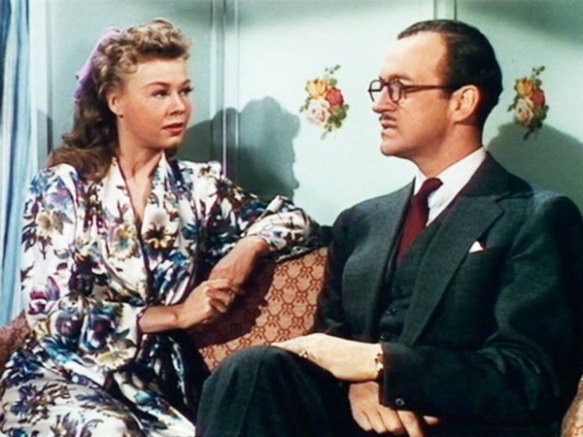 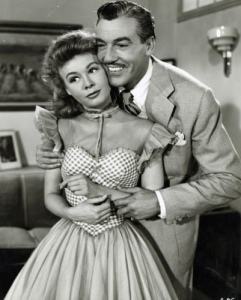 My Review:
I love this musical.
There are some first time film watching experiences that you remember and sometimes reflect on. “Happy Go Lovely” is one of those for me. Sometimes I randomly remember laying on the couch on a Friday, fall afternoon after coming home from high school. It was the weekend and I was ready to relax with classic films. That film binge started with “Happy Go Lovely.” I loved it then and I love it now.
It’s a silly, and simple plot and it’s largely forgotten. I think that it’s not as recognized today by American audiences since it was made in Great Britain with stars popular in America.
This is a fun little cinderella story that starts with a big misunderstanding and a rumor which eventually becomes reality.
I always enjoy seeing Vera-Ellen on screen. We only had her in films for such a brief time: her career spanned from 1945 to 1957 with only 16 film and TV appearances. She always had a glittering prescience and is one of the best dancers to ever grace the silver screen.
Then we have David Niven. Niven is always charming, humorous and seems sincere in his acting, regardless of the role.
And to top it all off, we have Cesar Romero!
For a little British musical, “Happy Go Lovely” has a fun cast with a few laugh out loud moments and catchy songs. And it’s in Technicolor.
If you enjoy musicals and are looking for a little slice of escapism, this is one of my favorite “go-to’s.”