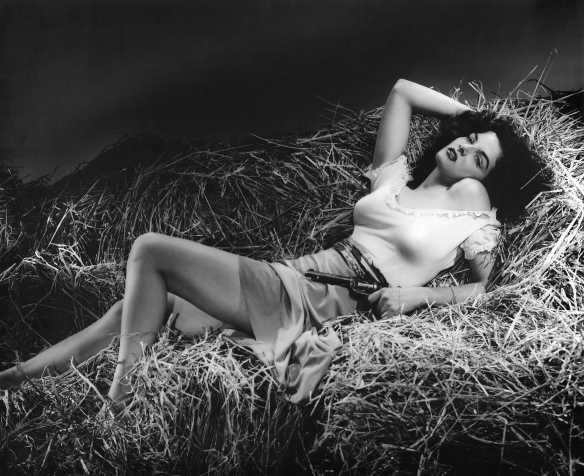 When I watched “Gentlemen Prefer Blondes,” it wasn’t Marilyn Monroe that I enjoyed watching, it was Jane Russell.  Russell had all the wit, charm and sarcasm that the movie needed to be bearable.

In an era where legs reigned (Betty Grable or Rita Hayworth), Jane Russell made it big with her own assets.  I think its safe to say that she paved the way to accentuated chests during the 1950s.  Just like Betty’s over the shoulder glance and Rita’s bed perching; it was Jane’s photo of her lounging on the haystack with her off the shoulder blouse for “The Outlaw” (1942) that started her off as a star.

But unlike so many other sexy, pin-ups of the 1950s like Mamie Van Dorean, Marilyn Monroe or Jayne Mansfield; Jane wasn’t like the rest.  For one she had brown hair and was a big woman. Russell wasn’t fat, but she was tall. Let’s just say, I wouldn’t wanted to make her angry. For another, she seemed to have brains and wouldn’t be pushed around. 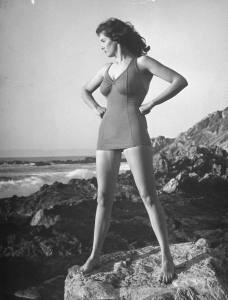 Jane Russell in a LIFE photo from 1942 by Eliot Elisofon

In a 1995 “Turner Classic Movie Private Screenings” with Robert Osborne and Robert Mitchum-who frustrated Osborne with his lack of talking-Russell shared stories of publicity photo shoots.  She said the camera man would give her something a watering pail while she was wearing a nightgown and get her to bend over so that you could see her cleavage.

“Sometimes the photographers would pose me in a low-necked nightgown and tell me to bend down and pick up the pails. They were not shooting the pails.”

Her response? “Up your’s buddy.”

Anyone would have to be smart, tough and fun to be able to costar several times with Robert Mitchum. Other actresses like Greer Garson and Katherine Hepburn starred with Mitchum, but didn’t hit it off too well with the well-known tough guy.

But Russell and Mitchum became a well known screen team, starring in “Macao” and “His Kind of Woman” while also being friends. Their friendship to me shows the down to earth, relaxed person that she probably was.

One reason I have always enjoyed Russell’s films are because they are fun and she is usually believable in her parts. As silly as it sounds, one of my favorite movies of her’s is “The French Line” (1953) where she plays a wealthy oil heiress from Texas who goes on an undercover vacation to make sure men love her for more than her money. The plot isn’t very thick, Gilbert Roland is sort of sleazy and the first several minutes of the movies involves her singing in a bathtub, but it is a fun, colorful movie.

Jane Russell and Robert Mitchum in “His Kind of Woman” (1951)

I also really enjoy the Russell Mitchum movies: “His Kind of Woman” (1951) and “Macao” (1953).  She looks beautiful in both, the films are intriguing and exciting, but there are even slightly humorous parts like with Vincent Price in “Macao.”  As a screen team, I never got a mushy, gushy vibe from them either. While you can tell they care about each other in movies, they generally aren’t falling all over themselves.

I also will admit, I have seen her early role in “The Young Widow” (1942) which Russell hated. In 1996, she said “The Young Widow should have died with her husband.”  I didn’t think it was a terrific movie but not as bad as Russell thought.

Up until her death, Miss Russell was still very visible and commenting on movies, her career and politics. It’s encouraging to see a classic movie star who tries to stay active rather than dying silently in their home.

Miss Russell was part of one of the best era’s in Hollywood and I’m glad that she was here to share her experiences with us for so long.

“I really think the 1940s were the best generation for Hollywood. Everybody was patriotic then. Nobody was talking the way they do now, against the soldiers. It was a different era, a different Hollywood then, and we respected our country, our leaders and our fighting men,” Russell said. “Sure, I’ll admit, I’m a mean-spirited, politically conservative old actress. I’m not bigoted against any race, just those idiots who want to spit on our soldiers’ hard work or remove the Ten Commandments from our schools and courtroom walls.”

Jane Russell will be missed, but certainly not forgotten. Rest in peace, Miss Russell.