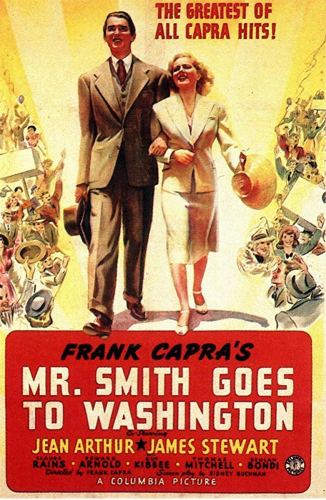 Plot:
When a senator dies, corrupt political boss Jim Taylor (Arnold) needs to fill the position with someone he can control. Patriotic but unexperienced Jefferson Smith (Stewart) is appointed in the place by his governor (Kibbee) and he is guided by Senator Paine (Rains), who is also controlled by Taylor, in his journey to Washington, D.C. Smith’s secretary Clarissa Saunders (Arthur), thinks Smith’s patriotism is bunk and tries to railroad him with a bad press story, but once she sees he is sincere supports him. While Smith is supposed to be a “Yes” man, he becomes determined to fight the corrupt senate politics.

END_OF_DOCUMENT_TOKEN_TO_BE_REPLACED

Tonight I had my third classic film on the big screen experience- and I have to add it might be my favorite thus far. 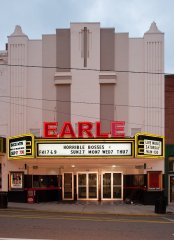 The Earle Theater in Mount Airy, NC. Taken from the Surry Arts Council

I drove roughly 30 minutes with fellow Elkin Tribune reporter, Kristin Zachary, to see “It’s a Wonderful Life” (1946) in Mount Airy, North Carolina.  Some of you may recognize Mount Airy as the town the television show “Andy Griffith” is based off of. The town is full of Andy Griffith related places such as the Andy Griffith Playhouse/mall/Parkway, Opie’s Candy Store or Barney’s Lunch Counter-but I digress, that is another post.

The film was showing at The Earle Theater, built in 1938 and opened in time to show “Gone with the Wind,” according to the Mount Airy News.

I can’t tell you when the last time I had watched “It’s a Wonderful Life.” Though my family owns it, it isn’t a Christmas movie we watch every year like “Charlie Brown’s Christmas,” “Bishop’s Wife,” “Christmas in Connecticut” or “White Christmas.”  I think part of the reason we don’t is because my dad gets very, very angry when Thomas Mitchell loses the money.

I had forgotten what a good movie it was, but then it’s a Frank Capra film so it’s pretty much flawless.

For those who haven’t seen the movie, the film is about George Bailey, played by Jimmy Stewart. He is in a bad place in his life, and his guardian angel comes to help. Before coming down to Earth the angel looks back over George’s life- reviewing events like saving his little brother from drowning, the death of his father and getting married. We see the struggles George Bailey has gone through for his family and how he has had to set aside everything he wanted in life to help everyone else out-mainly to keep his father’s business out of greedy Mr Potter’s hands. Before being visited by his guardian angel, he feels like he has reached the end of his rope and everything he has worked for has been for nothing. Bailey wishes he was never born and Clarence the Angel (played by Henry Travers) shows him what Bedford Falls would be like if Bailey hadn’t been born and how much he has affected everyone around him. 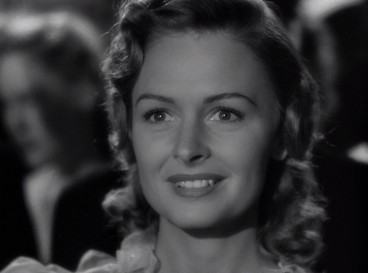 We meet grown up Mary (Donna Reed) for the first time.

Capra has some great camera shots. Most of my favorites were toward the end when George Bailey (Jimmy Stewart) hasn’t been born such as when childhood friend and local hussy Violet (Gloria Graham) is being arrested- the camera is in her face as she is struggling with the cops.  Another shot is  the close up of George Bailey’s face as he is frantically looking around Pottersville/Bedford Falls. Other shots I liked were at the graduation dance with the close up on Mary (Donna Reed) when George first sees her after many years and ( also at the graduation dance) when the two boys (one being Carl ‘Alfalfa’ Schwartz) are planning to open the swimming pool floor.

Some other thoughts I had during the movie:

-The last time I saw “It’s a Wonderful Life” I was probably in late elementary school or in middle school. Sometimes I didn’t understand why George was upset with how his life was going. Now that I’m out of college and have my own ambitions, I can relate to him a lot more.

-Thomas Mitchell (who played Uncle Billy) broke my heart. He was so sweet and forgetful and didn’t mean any harm to anyone. I almost died at the part where George is yelling at him and calling him a stupid fool for losing the money and then….Uncle Billy cries….and a squirrel jumped on his arm-further tears from me.  I understand being upset over the loss of $8,000, but who sends the absent minded relative to the bank with that much money?

-I always knew Donna Reed (who plays Mary) was a good actress, but I was really impressed with her acting in this movie. Unfortunately, she wasn’t given the chance at MGM she deserved, because many roles that might have gone to her, went to June Allyson.

-Gloria Graham (who plays Violet) isn’t one of my favorite actresses, but she also does a great job in this movie. It may be my favorite role of her’s.

Lionel Barrymore, as Mr. Potter, is the richest, greediest man in town.

-Lionel Barrymore is my favorite of the Barrymores and he sure can play a good bad guy. Barrymore plays Mr. Potter who is the richest man in town, greedy and wanting to have control everything. However, is anyone else bothered by what looks like a bald cap on Mr. Barrymore?

-I never realized how many funny parts were in this movie, either. Kristin and I were cracking up the whole time, particularly because a little boy with a really funny laugh was sitting in front of us. Every time he laughed at the funny parts, we would laugh harder.

At the end of the movie, Kristin and I walked out wiping tears from our eyes and she said, “They sure don’t make movies like that anymore.’ 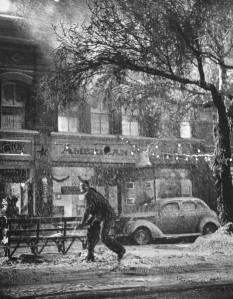 George running through the streets of Bedford Falls thankful to be alive.

Overall, the uplifting film mixed with the small town ambiance of Mount Airy, it was a very lovely experience and is my favorite classic film experience thus far.