For me, it’s always a treat when there is a Christmas scene in a film that isn’t considered a holiday film.

Not only is it because I’m a lover of Christmas, but usually something important or climatic happens during Christmas related scenes.

Below are a few non-Christmas films with important holiday scenes:

1. Battleground (1949): “Battleground,” starring a plethora of stars such as Van Johnson, John Hodiak and George Murphy, is a World War II film set during the Battle of the Bulge in Bastogne. The Battle of the Bulge (Dec. 16 to Jan. 25) is when the Allies were surrounded by the Germans and were unable to get airborne assistance due to heavy fog and snow.

During one scene, a Lutheran Chaplain played by Leon Ames delivers a Christmas sermon for the men. It is a particularly moving scene, because he describes the importance of why they are fighting this war. It’s my favorite scene in the whole movie and still holds meaning today.

While over-bearing Helen is decorating their Christmas tree, she discovers her daughter Molly has been writing and meeting up with Johnny.

In a rage, Helen slaps her daughter and sends her hurtling into their plastic Christmas tree which she earlier described as “solid plastic” and that it should “last for 10 years.”

In this unintentionally hilarious scene, Molly looks up from behind the strewn Christmas tree branches, tinsel and ornaments and says, “Merry Christmas, Mama.” 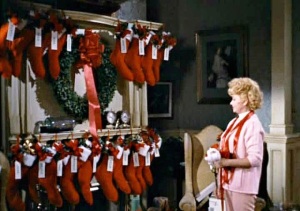 Helen looks at 18 stockings in “Yours, Mine and Ours”

3. Yours, Mine and Ours (1968):  Frank (Henry Fonda), who has 10 children, marries Helen (Lucille Ball), who has 8 children, putting entirely too many people into one home.

The comedy follows the adventures of how a family that large serves breakfast, gets to school and how the older children accept their new parents.

Christmas also gets complicated. Frank is up all night playing Santa trying to put toys together and is still working when the children get up in the morning. Christmas morning is chaos with one daughter eating candy canes off the Christmas tree and a bicycle breaking as a child rides it around the house.

But the real climax comes when Helen finds out that she is pregnant again…with their 19th child.

4. Since You Went Away (1944): A film that is my all-time favorite movie, “Since You Went Away” follows Anne Hilton (Claudette Colbert) and her two daughters Bridget (Shirley Temple) and Jane (Jennifer Jones) as they adjust to life on the home front during World War II. Though this film gets shown frequently during the Christmas season, it really isn’t a Christmas movie.

It begins when Anne’s husband leaves for war and goes through fall, summer, spring and ends at Christmas.

The last 20 minutes of the movie is Christmas making you laugh and cry. Jane has transformed from a selfish young teenager to a young lady, who has lost her boyfriend to the war and is now working as a nurse. Anne has come to terms that her husband is lost in action and is trying to have a normal Christmas with her family. 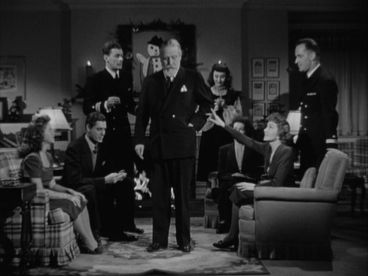 Christmas party scene in “Since You Went Away” with everyone playing charades. -screencapped by the Hollywood Comet

The Hiltons throw a Christmas party with a woman Anne met through her war work, a soldier Jane helped nurse, a family friend Lt. Tony Willet (Joseph Cotton) and his friend (Keenan Wynn) and their boarder Col. Smollett (Monty Woolley).

The party scene is fun and happy, but after all the guests leave Anne sees their servant Fidelia (Hattie McDaniel) putting presents under the tree that Tim sent her both he was reported missing. 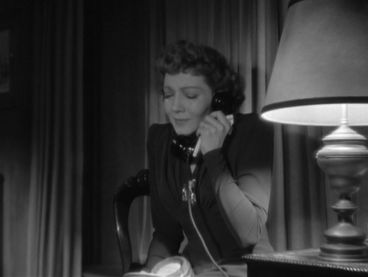 Anne Hilton (Claudette Colbert) receiving the cable gram that her husband is home safe. -screen capped by the Hollywood Comet

Anne opens her gift from her husband, a musical powder box that plays their song, and starts to cry. Then the phone rings and it’s a cable gram saying Tim has been found and is coming home.

The movie ends with happy tears, hugging and excitement.

What are some of your favorite non-Christmas movie holiday scenes? Share them below!