I didn’t full watch any of her films until 2003 when my film appetite craved musicals.

A swimming scene from “This Time for Keeps”

As I gorged on her candy-colored, aqua musical extravaganzas, I couldn’t wait until I could see another film. Each of her musicals brings back memories of spending weekends endlessly watching her movies.

When I was 15 I read her autobiography, “The Million Dollar Mermaid.” It’s my favorite film autobiography that I’ve read so far.

When I was 17, I bought one of her Esther Williams bathing suits.

Williams inspired me to practice swimming strokes and try to learn how to swim (I failed swimming lessons when I was five years old. How embarrassing).

I remember in 2004 when she was highlighted during TCM’s August Summer under the Stars series. I wasn’t looking forward to going back to school in August but my excitement of Esther Williams’ day out-weighed my dread. 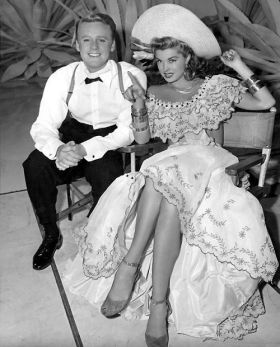 Esther Williams and frequent co-star Van Johnson in “Easy to Wed” dressed for the number “Bonecu de Pixe.” Carmen Miranda helped them with the Portuguese lyrics.

But it’s not just how she affected my every day actions, but my film knowledge that makes her important to me.

To date, I have seen all but two of Esther Williams’ films: “A Raw Wind in Eden” and “The Big Show.”

Esther Williams’s films are a textbook example of the mid-1940s to early 1950s MGM musicals: brightly colored, beautiful clothing and lavish musical numbers that may include Williams swimming, Xavier Cugat and his band shaking maracas or opera singer Lauritz Melchior belting a tune.

Her films also introduced me to my biggest film crush- Van Johnson.

Something I have always found appealing about Williams is that she is very attainable.

Her beauty is natural and girl-next-door like and her figure is athletic, rather than actress anorexic. In her 1996 Private Screenings Interview with Robert Osborne, she said becoming a star was all an accident.