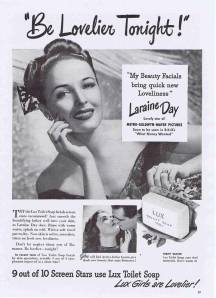 A year ago today, I posted my first classic movie tip. It was Lana Turner’s use of Boraxo soap to scrub her skin. I still use it now and find it really effective.

This is the 13th beauty tip and is a special tip for Comet’s beauty tips anniversary.

I sometimes listen to Lux Radio Broadcasts via podcast.  The Lux Radio Broadcasts were weekly broadcasts sponsored by Lux Soap where actors and actresses performed films on the radio. Sometimes the actors who starred in the movies perform them but other times they have to find replacements. For example, Shirley Temple and Herbert Marshall reprised their roles in “Kathleen” but Frances Gifford took over as the Laraine Day role.

Performing film scripts on air was a way the film industries were able to incorporate radio so that it wouldn’t be a threat to films, according to the Movies and Moguls documentary.

Lux Soap commercials would run in the broadcast. During the 1930s and war years, the commercials would talk about housewives using it to cut grease on dishes, keep the snap in their stockings or how it helped keep their complexion clear. 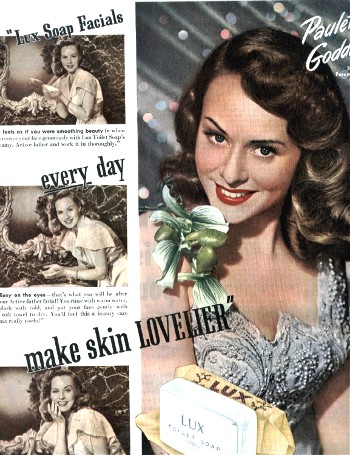 Paulette Goddard looking beautiful with the help of Lux

In the 1950s the commercials get increasingly corny. For example: “I was watching Jeanne Crain on the set of ‘Letter to Three Wives’ and she had to do the country club scene over and over again. At the end of the scene, she was exhausted but she said the one thing that did hold up were her stockings that had been washed in Lux Soap.”

Since the commercials made Lux sound like a miracle soap, I decided to do some investigation.

Most actresses were part of the Lux ad campaign and claimed that it made their skin soft and clear.

I went on Ebay to find my own Lux soap to see how it worked for me.  Lux is no longer found in stores, but is still sold abroad.

I bought a few bars of new Lux (Mild soap with honey) and several old bars of soap. The seller said the soap was from pre-1974 but wasn’t sure of the exact date.

I used both soaps after being particularly dirty after jogging and going to the swimming pool. The new soap smelled nice and was soft but really wasn’t anything spectacular.

The old soap still produced a nice thick, creamy lather and left my skin feeling soft. It did smell very strongly and I had a faint smell on my skin for the rest of the day. 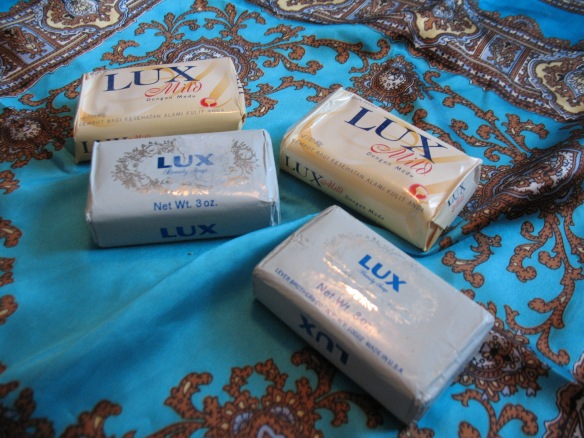 The white packages are the pre-1974 soap and the peach colored is new.

To review: I didn’t notice my skin looking as beautiful as a movie star, but I certainly felt clean and smooth afterwards. Maybe after using it a little longer I will have the skin of Dorothy Lamour or Cyd Charisse!

Also, Comet’s own anniverary post will be coming soon. It was actually in mid-May and I completely forgot!