Plot:
Steven Ross (Morgan) and Jeff Howard (Carson) are trying to open a night club in New York.
However, problems arise when they realize their club is next door to classical conductor Ladislaus Cassel (Sakall) and his opera singing granddaughter Vicki (Vickers). Vicki’s stuffy manager Martin Drew (Woods) works to shut the club down with the help of Vicki’s equally proper grandmother (Bates), under the premise that the noise would bother the home’s high-brow performers.
Tired of being controlled by Martin-who also sets her bedtime and won’t let her go out, Vicki slips away form home and meets Ross and Howard. Becoming friends with them, she helps to keep their club open and finds a backer for their show. 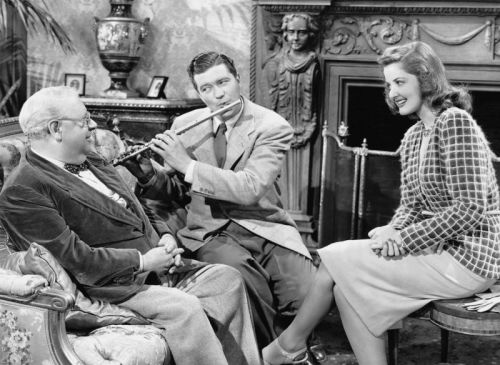 Dennis Morgan shows S.Z. Sakall and Martha Vickers how to play swing on the flute.

Trivia:
-Martha Vickers was dubbed by Sally Sweetland.
-Nominated for Best Music, Original Score for the song “A Gal in Calico” written by Arthur Schwartz and Leo Robin.

Awards/Nominations:
-Nominated for an Academy Award for Best Music, Original Song for “A Gal in Calico” by Arthur Schwartz and Leo Robin

Highlights:
-Girls dressed as cows in the “A Gal in Calico” number. I just thought it was amusing.
-Pianist Carmen Cavallaro appearing in the film.

My Review:
There is nothing remarkable about “The Time, The Place and the Girl,” but it’s fun.
I think the most notable thing about the film are it’s two leading men: Dennis Morgan and Jack Carson. The two actors starred in several films together. These days, I think they are often overlooked as a comedic duo.
Their film appearances together include: Wings for the Eagle (1942), The Hard Way (1943), Thank Your Lucky Stars (1943), Shine on Harvest Moon (1944), Hollywood Canteen (1944), Two Guys from Milwaukee (1946), One More Tomorrow (1946),Always Together (1947), Two Guys from Texas (1948) and It’s a Great Feeling (1949)
It’s also fun to see Janis Paige as a young Warner starlet. I feel that in the 1940s, she took over the goofy sexpot roles that Jane Wyman previously played for Warner Brothers.
S.Z. Sakall is always funny and adorable with his accent and mispronunciations (this time he calls Philadelphia “PhillyDilly”), and Florence Bates is good in nearly every film she plays.
Maybe what was slightly lacking for me was the leading lady. Martha Vickers was certainly lovely to look at, but not overly memorable for me. It seemed like she was stepping in to a Joan-Leslie-Like role but didn’t have the sweetness and shine that Leslie had.
One low point is when Jack Carson sings in black face. The theatrical makeup is always off-putting and (obviously) dated but not a stranger to any pre-1960 musical.
Overall, the film is colorful and has some great music. Maybe it would have raised in the ranks slightly for me if there was another leading lady.