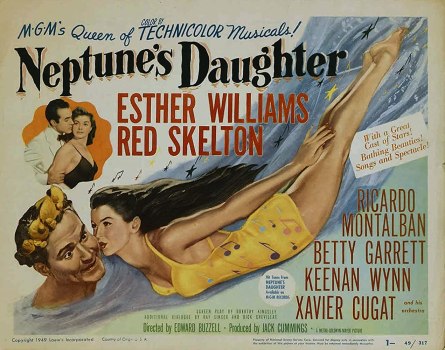 Plot:
Eve Barrett (Williams) is a champion swimmer who is convinced to start a Neptune’s swimsuit company in a partnership with Joe Backett (Wynn). Eve becomes a successful swimsuit designer with Joe. A South American polo team comes to town for a match, and Eve and Joe plan a swimming extravaganza and fashion show to partner with the big event. Eve’s man-hungry sister Betty Barrett (Garrett) hopes to find a romance with a polo player, and mistakes the team’s masseur Jack Spratt (Skelton) for the lead player, José O’Rourke. The real José O’Rourke (Montalban) pursues Eve, while she is thinking he is two-timing her sister.